The Islamic State group (IS) has confirmed the death of its leader Abu Ibrahim al-Qurashi, more than a month after his demise in Syria, and named Abu Hasan al-Hashemi al-Qurashi as his successor.

Two Iraqi security officials and one western security source told Reuters that the new leader, who will serve as the group's third chief since its inception, is the brother of the first IS leader Abu Bakr al-Baghdadi, who proclaimed the group's "caliphate" in Mosul in 2014.

The Iraqi security officials said his real name was Juma Awad al-Badri, and that he is Iraqi and Baghdadi's elder brother. A western security official also confirmed to Reuters that the two men were brothers, though did not specify which was older.

In an audio recording released on Thursday on its social media channels, the group's spokesperson said IS personnel had "pledged allegiance" to Abu Hasan al-Hashemi al-Qurashi, 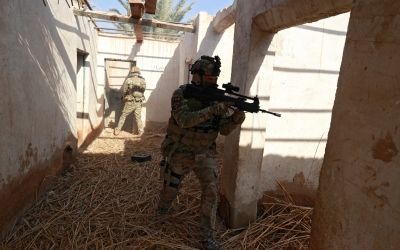 The recording confirmed the death of the former IS chief along with the group's ex-spokesman.

According to the White House and US defence officials, Abu Ibrahim al-Qurashi died when he detonated a bomb to avoid capture during a US raid that saw commandos swoop in by helicopter to an area in northwest Syria controlled by a rival armed group.

His death, along with a number of militants and civilians during the night of 2 February in the town of Atmeh in Idlib province, was the biggest setback to IS since Baghdadi was killed, also in Idlib, during a 2019 US commando raid.

Though IS no longer controls the vast territory it did during its 2014-2018 zenith, which encompassed a third of Syria and Iraq, the group remains a security threat, launching attacks from hideouts on Kurdish-led forces and Syrian government troops.

The militants also continue to mount attacks in Iraq from hideouts.

Abu Hasan al-Qurashi rises to leader at a time when the group has been weakened by US-backed operations in Iraq and Syria aiming to thwart a resurgence.

According to the IS audio statement, the new leader was endorsed by Abu Ibrahim before his death and the appointment was confirmed by the group's senior leaders.

The recording did not offer further details.