Ibrahim Musaibli, first alleged IS militant to be prosecuted in US, consents to detention pending trial On the day that US prosecutors had threatened to bare scathing evidence against the first suspected Islamic State (IS) group militant to be tried in the US, the defendant agreed to remain imprisoned pending trial, keeping a lid on the details of the case.

Ibrahim Musaibli, an American citizen, made a second court appearance in Detroit on Friday, but it was a brief one, lasting only a few minutes.

Charged with providing material support to a designated terrorist organisation, Musaibli faces up to 20 years in jail and a $250,000 fine if convicted. He pleaded not guilty.

Prosecutors had planned to demonstrate at the hearing that the suspect is a danger to the public and a flight risk, in order to keep him in jail. But the defendant consented to his detention, waiving his right to request being freed on bail.

Musaibli appeared to be in good spirits, smiling as he looked at the audience in the courtroom, where his family members were not present, unlike at Wednesday's hearing. He was wearing an orange jumpsuit with an unbuttoned top, revealing a brown undershirt.

His balding, greying hair, short beard and apparent exhaustion in his face made him look older than his 28 years.

The defendant's family told Middle East Eye earlier this week that he did not willfully join IS. Musaibli's brother said that the suspect, who was born and raised in the Detroit suburb of Dearborn, had been forced into Syria by acquaintances who turned out to be IS operatives.

Musaibli had moved to Yemen in 2015 to get married.

US Attorney Matthew Schneider dismissed the family's assertion on Friday, saying that they "can say all they want", but the prosecution has a large volume of evidence.

He added that he was not surprised by the not-guilty plea because "the defendant is innocent until proven guilty".

Asked by MEE about the likelihood of offering Musaibli's defence counsel a deal, where the suspect would plead guilty in exchange for a more lenient sentence, Schneider did not rule out the possibility.

Shahad Atiya, a Dearborn-based attorney who is not involved in the case, said consenting to detention may be a way to prevent the public from forming prejudiced opinions against the defendant.

She said that if the prosecution convinced the arraigning judge that the suspect was a threat to the community or flight risk to deny him bail, it might taint the defendant's image to potential jurors.

"If it helps to conceal some of that information that may come out in a bond hearing... maybe it's better to convince your client to stay detained," Atiya told MEE.

She added that high-profile publicity risks defendants' chances of getting an impartial jury.

"Sometimes your client's privacy is more important than their momentary freedom, because you may be able to help their case ultimately by having fewer people hear about the allegations that have not been proven in court," Atiya said.

Schneider, the prosecutor, would not share evidence outside the courtroom. He said the wheels of justice sometimes move "slowly and silently".

Now, Musaibli's case will move to the pretrial stage, where a federal judge will decide what evidence presented by the defence and prosecution will be admissible.

Musaibli is one of hundreds of suspected IS militants captured by US-backed Kurdish fighters in Syria.

On Thursday, the UK Home Office suspended legal cooperation with Washington in the case of two alleged militants raised in Britain, over concerns that they may face the death penalty if prosecuted and convicted in the US. 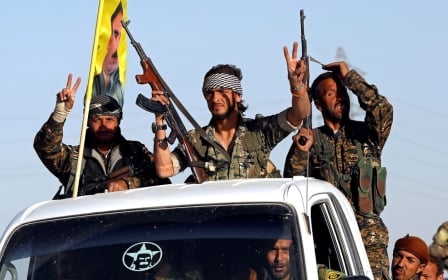