As talks between Israeli and Palestinian delegations continue in Cairo, Israel reportedly agrees to extend a three-day ceasefire in Gaza 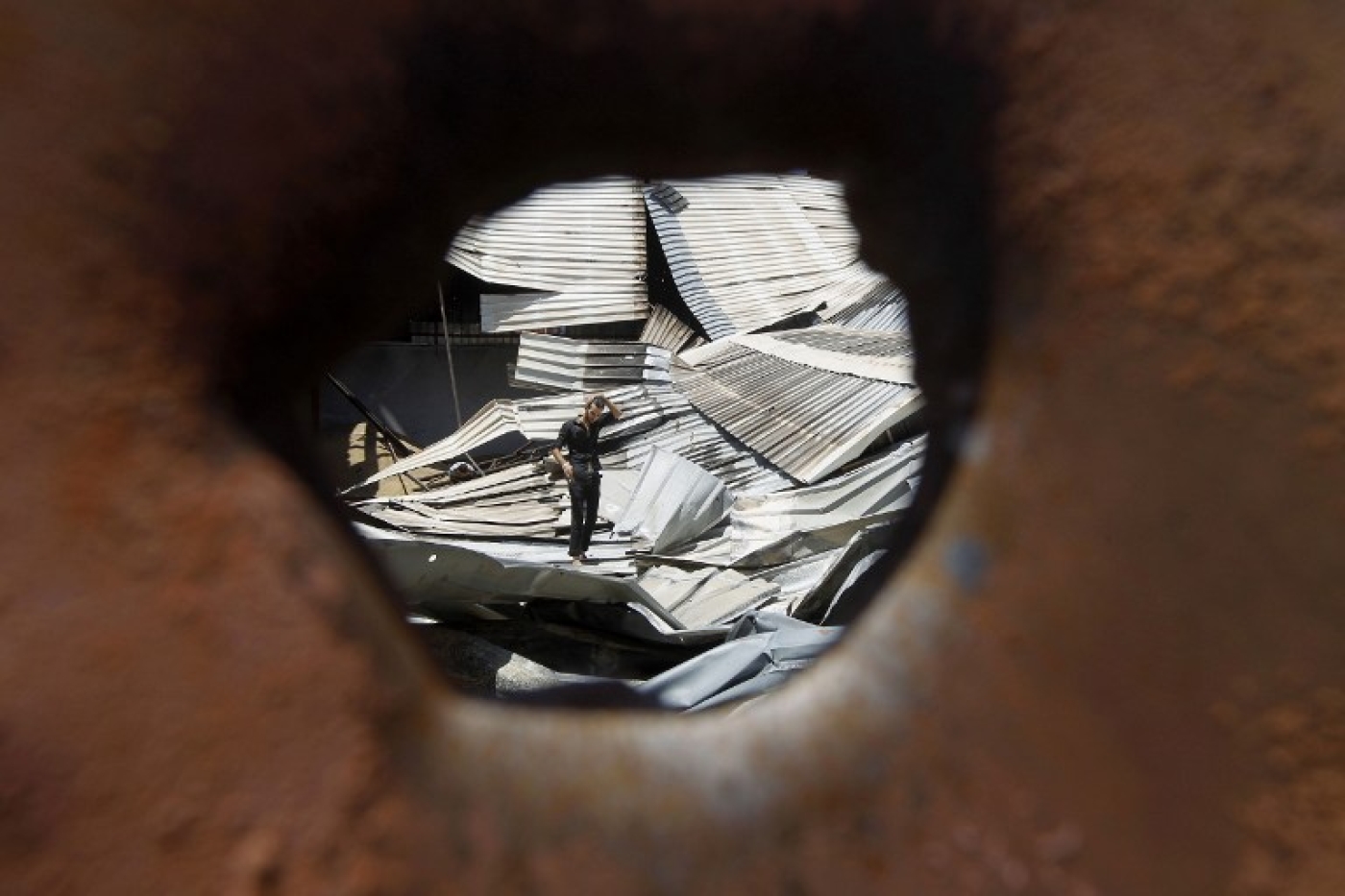 Israel has reportedly agreed to extend a three-day ceasefire in the Gaza Strip for another 72 hours, according to the Israeli Foreign Ministry.

"I can confirm that Israel has agreed to an Egyptian proposal to unconditionally extend the ceasefire for another 72 hours," ministry spokesman Yigal Palmor told reporters on Thursday.

"I don't know about Hamas' position regarding this," he said.

Israel and Palestinian factions are currently observing an Egyptian-brokered three-day ceasefire that came into effect on Tuesday morning and is expected to expire at 0500GMT Friday unless extended.

The two sides are currently in Cairo for indirect talks aimed at reaching a long-term ceasefire agreement.

Palmor declined to discuss the contents of the Cairo talks.

Earlier on Thursday, three EU countries reportedly presented Israel with a plan to rehabilitate the Gaza Strip in exchange for international supervision to prevent Hamas and other groups from rearming.

The principles are: preventing the arming of Hamas and other organisations with fighters in Gaza; rehabilitating the Gaza Strip in cooperation with the international community and Palestinian Authority (PA); enabling the transfer of humanitarian aid; setting up an international mechanism to prevent prohibited materials from reaching the Strip; ensuring that cement and iron, used for rebuilding Gaza, do not fall in the hands of organisations; returning the PA and President Mahmoud Abbas to Gaza; and potentially returning EU observers to the Rafah border alongside the Palestinian presidential guard.

Cohen was said to have expressed interest in working with the EU diplomats to advance the proposal, Haaretz reported.

There was no immediate reaction from Hamas or Islamic Jihad to the reported proposal.

At odds over prolonging truce

Overnight and early into Thursday, Israel and Hamas appeared to be at odds over prolonging the truce.

Israel had indicated it would back an unconditional extension with an Israeli official telling reporters on Wednesday that his government had agreed to extend the ceasefire.

"There is no agreement on extending the lull with Israel," Abu Marzouq wrote on his Twitter account on Wednesday.

"Any news about the extension of the truce is unfounded," added Hamas spokesman Sami Abu Zuhri.

A second Israeli delegation also arrived in Cairo late Wednesday, joining an earlier delegation that came Tuesday, to join indirect talks with representatives of Hamas and Islamic Jihad, a security source at the Cairo airport said.

The three-member delegation was received at the airport by officials from the Egyptian intelligence, which mediates the indirect talks, before heading to the venue of talks for discussions with Egyptian officials, the source told Anadolu Agency on the condition of anonymity.

Guns have stayed silent in the tiny Palestinian enclave since 8:00 am (0500 GMT) Tuesday, bringing relief to millions of people on both sides after the deaths of 1,886 Palestinians and 67 on the Israeli side.

A spokeswoman for the Israeli army said 27,000 reservists called up for the conflict had been sent home, leaving a force of 55,000 still on active duty, in another sign of growing hopes for long-term quiet.

In the battered Gaza Strip, shops, banks and markets have reopened, and people crowded into the streets, but not neccesarily any sense of normality.

MEE contributor Mohammed Omer, who is currently in Rafah, one of the hardest hit areas, said he went to see his grandmother early Thursday morning who was displaced because Israel said they were planning to bomb homes in the area, despite the ceasefire.

"In three minutes," Omer reports, "all homes that have tuck-tucks [small cars] had to take to the streets looking for shelter." 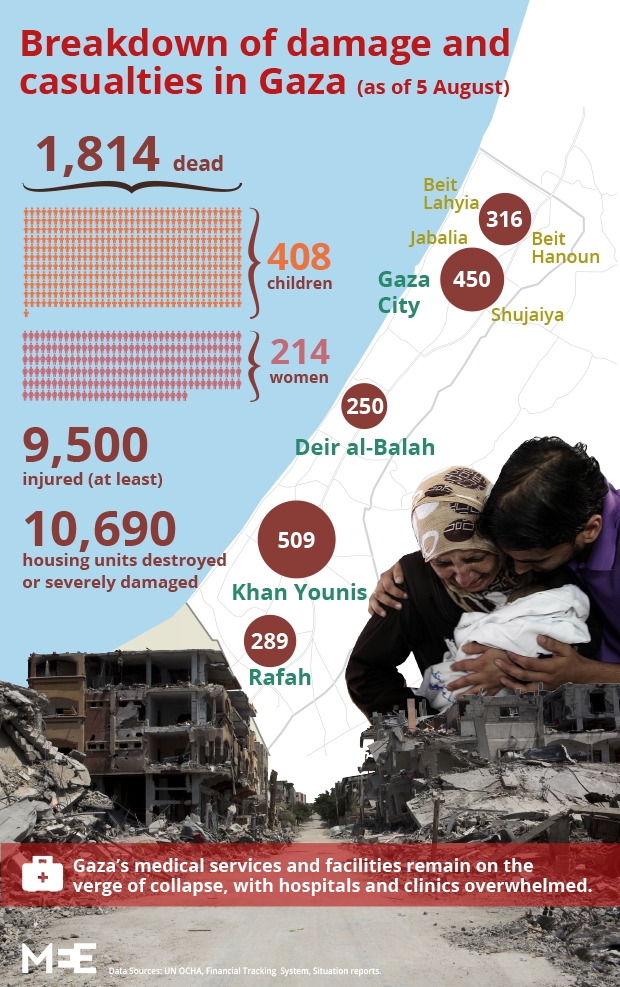 None of the homes were bombed, however Omer said the violence of the past month can still be felt all around the neighbourhood.

"As I type this, I can smell remains of dead bodies in the garage of ambulances nearby. Ironically, in the same place, several babies are just born in the last 2 hours," he writes. "Goodmorning from Gaza."

US President Barack Obama said Wednesday that the people of Gaza need greater hope for the future, as he urged the extension of an Israel-Hamas ceasefire.

Obama said the United States was supporting ceasefire talks but added: "Long-term, there has to be a recognition that Gaza cannot sustain itself permanently closed off from the world."

"I have no sympathy for Hamas. I have great sympathy for ordinary people who are struggling within Gaza," Obama added.

Nearly half a million Palestinians were displaced by Israeli bombardment, and many are still sheltering in schools after their homes were flattened in the offensive.

"Look at my house, it is totally smashed. How can my children live here?" asked Mussa Abu al-Rus, whose house had been taken over by Israeli soldiers.

In Jerusalem, Israeli Prime Minister Benjamin Netanyahu launched a vigorous defence of the conflict in the face of international criticism over heavy Palestinian civilian casualties.

"I think it was justified. I think it was proportionate and that doesn't in any way take away the deep regret we have for the loss of a single civilian casualty," Netanyahu said in his first public remarks since the ceasefire came into effect.

On the Israeli side, the loss of 64 soldiers is its biggest toll since the 2006 war against Hezbollah.

UN Secretary General Ban Ki-moon warned that after three wars in Gaza in six years, international patience with both sides is being tested.

He opened a special meeting of the UN General Assembly with an appeal for a lasting peace.

"The senseless cycle of suffering in Gaza and the West Bank, as well as in Israel, must end," he said. 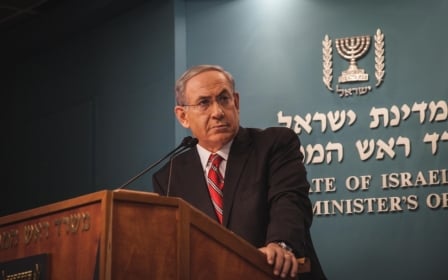 Gaza Under Attack
Our bodies are spent, but our spirit endures