Israeli security forces arrested several Palestinians in the West Bank as part of a manhunt after an explosion killed an Israeli teenager, the army said on Saturday.

A homemade bomb on Friday near the settlement of Dolev, northwest of Ramallah, killed 17-year-old Rina Shnerb and wounded her father Eitan and brother Dvir, AFP said.

No Palestinian group took responsibility for the blast.

"As part of the ongoing pursuit," Israel's army, Shin Bet security service and police "apprehended a number of suspects and transferred them to security forces for further questioning," the military said in a statement. An army spokesman declined to provide further details or state the number of arrests made after what the military has called a terror attack.

Shnerb was buried on Friday in her central Israeli hometown of Lod.

Her father and brother were in stable condition on Saturday, Jerusalem's Hadassah hospital said.

Dolev is in a hilly region surrounded by olive groves and orchards and is a popular site with tourists and hikers.

The area saw clashes last year between Palestinians and Israelis over settlement expansion, with Palestinian villagers decrying settler attempts to take over their land, including water sources, Reuters said.

Tensions are high in the West Bank, where recently there has been a string of attacks near Israeli settlements.

Last Friday, two Israelis were injured near the Elazar settlement, in what police said was a car-ramming attack. The driver, a Palestinian man, was shot dead at the scene by Israeli security forces.

Earlier this month, an Israeli soldier was stabbed to death near the settlement of Migdal Oz, leading to the arrest of two Palestinians.

More than 600,000 Jews live in about 140 settlements built in the West Bank since Israel occupied the territory in the 1967 Middle East war. Israeli settlements in the West Bank, where 2.5 million Palestinians live, are illegal under international law. 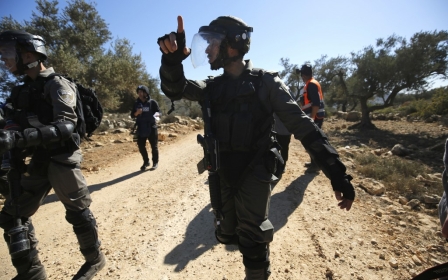