Israel backs down on plans to tax Christian property in Jerusalem 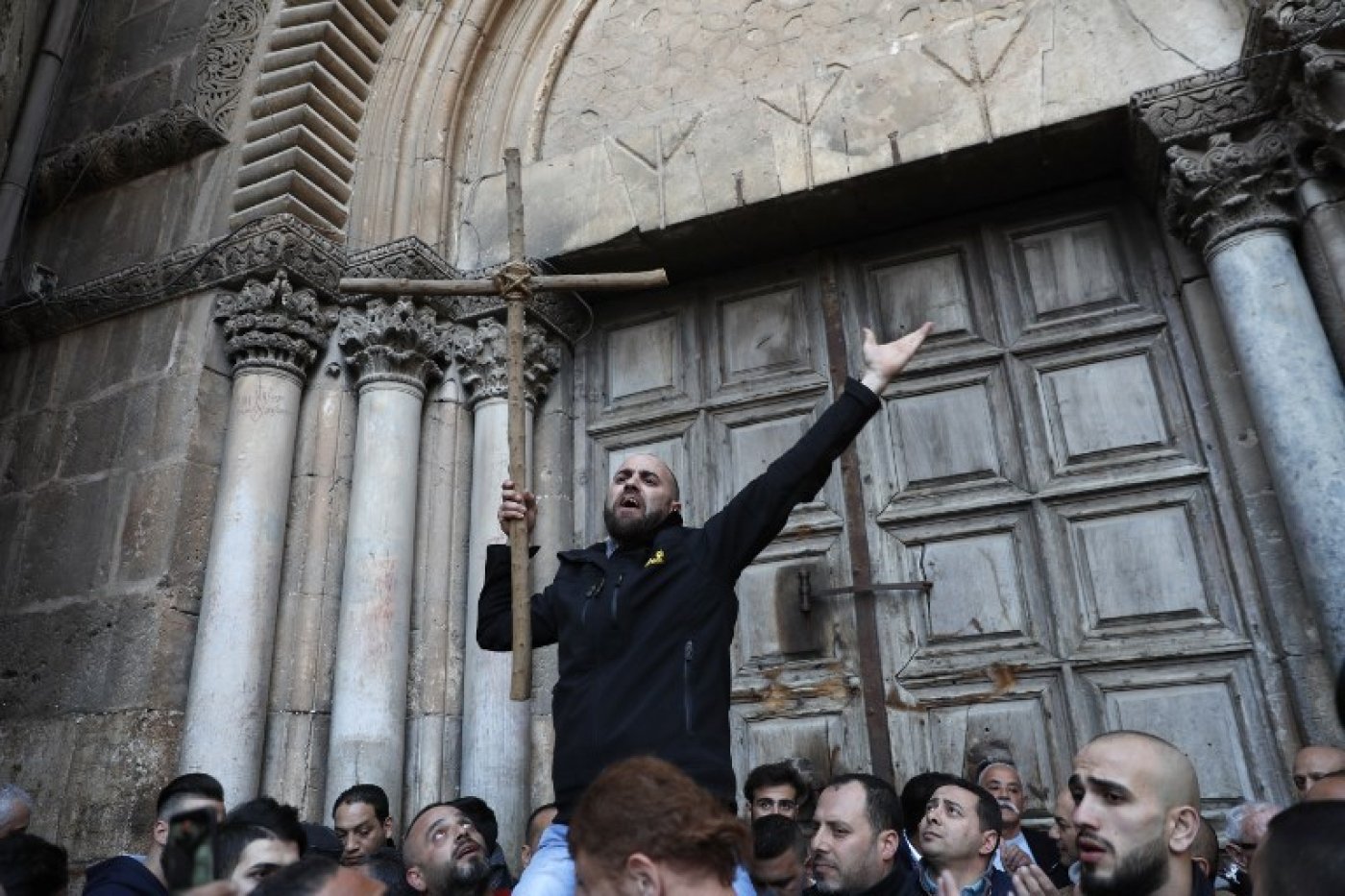 A Palestinian man holds a cross during a protest outside the closed gate of the Church of the Holy Sepulchre in Jerusalem's Old City, 27 February (AFP)
By
Mustafa Abu Sneineh

Israel has suspended a tax plan that Christian leaders said would have allowed church land to be expropriated, three days after the doors of the Church of the Holy Sepulchre in the Old City of Jerusalem were closed in protest.

On Tuesday, the office of Israeli prime minister, Benjamin Netanyahu, announced the suspension in a statement, saying a "professional team" would be appointed to come up with a solution to the tax measures which sparked the protest.

"As a result, the Jerusalem municipality is suspending the collection actions it has taken in recent weeks," the statement said.

Now church officials tell Middle East Eye that leaders of the Greek Orthodox, Armenian and Catholic denominations are working on a deal with the Jerusalem municipality.

Anna Koulouris, an official in the chief secretariat office of the Greek Orthodox Patriarchate of Jerusalem, said: "The leaders want to see a genuine offer from the Israeli municipality, and then they will decide if to open the doors of the Holy Sepulchre."

The church reopened on Wednesday after a three day closure. The two men who act as keepers of the key of the church opened its large wooden doors at around 4:00 am local time, ending the protest that began on Sunday at noon.

Shortly afterwards, a group of pilgrims arrived to visit the sacred site.

Jerusalem's mayor, Nir Barakat, recently said churches in Jerusalem owed $186m in uncollected taxes on their properties and that the new measure would only affect establishments not used for religious practise.

Koulouris said that statement was "false".

"The church pays taxes on its commercial properties. For example, the church owns monasteries in the Old City of Jerusalem and rent rooms, and it pays the Arnona taxes on these properties," she said.

She added that "the proposed tax bill will be imposed on properties that are related to church mission such as schools, clinics, and homes for nuns and priests".

Earlier this month, an Israeli cabinet committee said it would consider a bill allowing the Jerusalem municipality to collect taxes on properties owned by the church which are not used for religious purposes.

The bill, according to the government, would protect homeowners against the possibility that private companies will not extend their leases.

But the churches, which are major landowners in the city, say the law would make it harder for them to find buyers for their land and enable confiscation of their land.

On Sunday, in reaction to the decision, Christian leaders closed the doors to the Holy Sepulchre. Thousands of pilgrims and tourists seeking to visit what many see as the holiest site in Christianity were locked outside.

The Holy Sepulchre was built on the site where Christians believe Jesus was crucified, buried and resurrected. It is jointly owned by the Greek Orthodox, Armenian and Roman Catholic denominations.