Forces impose cordon around Qabatiya, home of three Palestinians who carried out Jerusalem attack described as an 'escalation' by Israeli police The Israeli army has blockaded a village in the north of the occupied West Bank it says was home to three Palestinian attackers who killed an Israeli police officer and seriously injured another in Jerusalem on Wednesday.

On Thursday morning fierce clashes broke out in the village, after Israeli forces blockaded the area late on Wednesday night with the intention of razing the homes of the three attackers.

A 15-year old boy was seriously injured after being run over by an Israeli army Jeep, according to Palestinian media, and the Israeli military has declared the area a military zone for at least a month.

Ali Zakarna, a local spokesperson for the Fatah movement, told Maan on Thursday morning that four men had also been injured when Israeli forces opened fire.

All entrances and exits of the village of Qabatiya, near Jenin, have been locked down, and the families of the three attackers have been ordered to vacate their homes before they are razed, a practice commonly used by the Israeli military following attacks.

On Wednesday three men from Qabatiya attacked police with guns and knives outside Jerusalem's Old City, killing an officer and wounding another before being shot dead.

They were also found to be in possession of explosive devices, Israeli police said.

The attack was described in Israeli media as an "escalation" after more than four months of Palestinian knife, gun and car-ramming attacks.

"There's no doubt that the intention of a terrorist cell with such an arsenal of weapons was to carry out a mass attack," Israel police commissioner Roni Alsheich said on Wednesday.

The attack happened at the Damascus Gate entrance to the Old City. A member of the Israeli police, Hadar Cohen, 19, died hours after the attack from a gunshot wound to the head. The other injured officer was said to be in serious condition.

According to Israeli authorities, the Palestinians were approached by border police. One showed an ID, but a second drew a gun and began shooting.

The Reuters news agency quoted a police spokesman as saying one attacker had fired an automatic rifle, critically wounding one policewomen. Another policewoman was stabbed and wounded, and two pipe bombs were found at the scene.

According to police, a security guard at the entrance to the central bus station of the city, southeast of Tel Aviv, asked the two 13-year-olds to identify themselves.

The two then pulled out knives and stabbed the guard in an arm and his legs, lightly wounding him before they were apprehended. The guard was taken to hospital, medics said.

The wave of violence since October has killed 26 Israelis, as well as an American and an Eritrean, according to an AFP count.

At the same time, 164 Palestinians have been killed by Israeli forces, most while carrying out attacks but others during clashes and demonstrations. 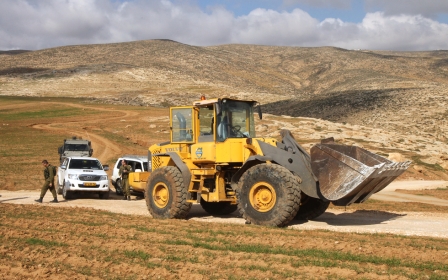