120,000 Syrians have been displaced by fighting in southern Syria (AFP)
By
MEE staff

Syrians displaced by a government offensive in the country's south will not be allowed to cross into Israeli-held territory, an Israeli minister and the military said on Friday.

More than 120,000 Syrians have reportedly gathered near the border with Jordan and the Israeli-occupied area of the Golan Heights since the Syrian army began its push to retake rebel-held territory.

"I think we must prevent the entry of refugees from Syria to Israel, in the past we have prevented such cases," Yuval Steinitz, Israel's energy minister, told Tel Aviv Radio 102FM in an interview.

The Israeli military said it delivered 300 tents and 58 tonnes of food and clothing supplies on Thursday night "as a goodwill gesture, while maintaining a policy of non-intervention in the Syrian conflict".

"The [Israeli army] cannot permit Syrians fleeing hostilities to enter Israel and will continue maintaining Israel's security interest," it said in a statement.

The military also said the aid supply was part of its Good Neighbour policy, which has also involved treating wounded Syrians, some of them anti-government fighters, in field hospitals in the Golan Heights.

"Open the Borders" is trending in #Jordan in response to 50k people fleeing the bombardment on Daraa. "We'll share our bread with them". #افتحوا_الحدود pic.twitter.com/52MY5Xhug8

Jordan has also come under fire for closing its border to the latest wave of Syrian refugees. According to the UN, it hosts 650,000 Syrians who have fled the seven-year civil war, but the government maintains the number is more than one million and has repeatedly insisted the country cannot take any more.

Many of the country's citizens appear to disagree with their government's stance, with a call to "open the borders" becoming the top trending topic among Jordanian Twitter users.

At least 98 Syrians have been killed in and around the main southern city of Daraa over 10 days of fighting, according to the Syrian Observatory for Human Rights.

Many of the refugees are now stranded in the Golan Heights, a Syrian region which Israel occupied during the 1967 Arab-Israeli war.

The UN human rights chief Zeid Ra'ad al-Hussein warned on Friday of a humanitarian "catastrophe" for civilians trapped by the fighting because of both government checkpoints and Islamic State group (IS) fighters preventing civilians from leaving.

Syria's southwest region is strategically sensitive because of its proximity to the frontiers with both Jordan and the Israeli-occupied Golan Heights.

For Assad, the latest push means government forces in the heart of Daraa province and those in adjacent Sweida province are now directly connected.

The United States and Russia, Assad's most powerful ally, last year agreed a "de-escalation" zone in the area that has helped to contain the violence there.

The US has told Syrian rebel factions they should not expect military support to help resist the offensive, according to a copy of a message sent by Washington to the commanders of rebel Free Syrian Army groups in the area. 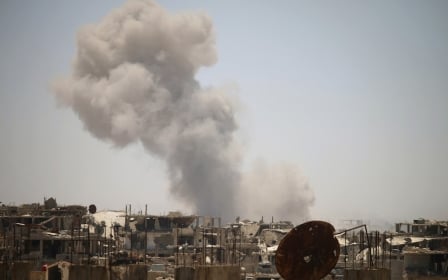 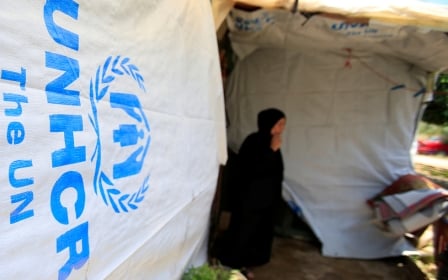