Israel hits Gaza with air strike ahead of Kerry visit Israel's army launched an air raid on the Gaza Strip on Monday evening after a rocket was fired into southern Israel, the evening before US Secretary of State John Kerry was to visit the region.

"This morning, a rocket was fired from the Gaza Strip into an uninhabited area of southern Israel ... without causing any injuries," the Israeli military said in a statement.

"In response to this attack, the army targeted a Hamas military post in the centre of the Gaza Strip," it added.

No group has claimed responsibility for firing the rocket, but Israel holds Hamas responsible for any rocket attacks that come from the Strip.

The army said it was the 20th rocket fired from the territory, which is controlled the Palestinian Hamas movement, since the start of the year.

The Palestinian news agency Maan reported that Israeli warplanes were still hovering over various sites in the Gaza Strip.

The air strike came after a day of violence in the West Bank and Jerusalem left four people dead. An Israeli soldier and three Palestinian alleged attackers were killed ahead of Kerry's visit to Israel-Palestine in a bid to end the bloodshed.

One soldier was stabbed to death while another was seriously wounded in the same attack at a petrol station on the edge of the occupied West Bank. The alleged assailant was shot dead at the scene.

Later, a military spokeswoman revealed that one of the soldiers, a man named as 18-year-old Ziv Mizrahi, had died while the other, a female officer, had been wounded and evacuated for medical treatment.

Earlier on Monday one teenage girl was killed and another seriously injured when they attacked an elderly man in Jerusalem, police said, the first stabbing in the city for nearly two weeks.

In another attack, a Palestinian teenager was shot dead when trying to stab an Israeli soldier near Huwara to the south of Nablus.

An 18-year-old Palestinian woman, identified by medical sources as Samah Abdullah, was shot and severely wounded by Israeli forces in the same attack.

The shootings and stabbing were the latest in a wave of violence since 1 October that has left 92 Palestinians dead, including one with Israeli citizenship, as well as 17 Jewish Israelis, an American and an Eritrean.

Many of the Palestinians who were killed were alleged attackers, but dozens of them were also killed in demonstrations. Rights groups have criticised Israel for a "shoot-to-kill" policy, saying many of the killings constituted excessive use of force.

Kerry is due to arrive on Tuesday morning to hold talks with Israeli Prime Minister Benjamin Netanyahu and Palestinian President Mahmoud Abbas aimed at defusing the violence.

The top US diplomat has repeatedly called for both sides to take "concrete steps" to reduce tension, end provocative rhetoric and ensure access to Jerusalem holy sites, but his words have had little impact on the ground.

There is little optimism he will be able to convince the Palestinian and Israeli leaders to resume peace talks, which last broke down more than 18 months ago.

"There's no agreement to be reached between the parties right now," one senior US official said. 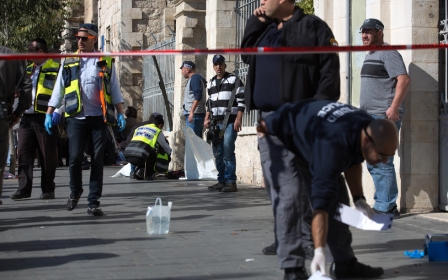 Inside Israel
Another crack in Israeli democracy
Gideon Levy