A prestigious journalism prize awarded to a freelance reporter in Gaza in recognition of her work for Middle East Eye has been sent back to London after being held by Israeli customs officials for four months.

Palestinian journalist Maha Hussaini, who won the UK-based Rory Peck Trust's Martin Adler Prize last November, told MEE that customs officials demanded that she pay $250 for security checks and storage to hand over the trophy - a small, engraved glass disc on a metal stand - which she refused to do. “The whole process was very humiliating,” she said of her months-long attempt to retrieve the trophy.

“I thought before that my life in Gaza, or our life as Palestinians in Gaza, is way harder than the life of Palestinians living in the West Bank or Jerusalem because we are living under a strangling blockade.

“After going through this experience, I thought no. All the strangling blockade, the restrictions and all the permits I was denied from the Israeli side - all of this is way easier for me than it is to fill out one application in Hebrew and feel that it’s a reality that I am occupied.”

Hussaini, who started reporting after graduating from university - and against her family’s wishes - during Israel’s 51-day assault on Gaza in 2014, has written for Middle East Eye since 2018 on a range of political and social issues.

The Martin Adler Prize recognises a freelance journalist who has “made significant contributions to newsgathering” and is named in honour of the late Swedish journalist, who was killed in Mogadishu, Somalia, in 2006.

With last year's awards ceremony cancelled as a result of the Covid-19 pandemic, Hussaini made a video acceptance speech from her desk in Gaza. A few days later, the trophy was shipped her way.

But Israel, which has besieged Gaza for 14 years, regulates all materials that enter the enclave. Special permission is required for products that are considered “dual use” - defined as those that have inherent civilian use but could also be used for military purposes.

Why - or if - a glass trophy posed a threat and required months of security checks, is unclear. Neither the Coordination of Government Activities in the Territories (COGAT), which implements Israeli policies in Gaza, nor the Israeli tax authority, which was in possession of the prize, had answered MEE’s requests for comment at time of publication.

Hussaini said that the bureaucratic back-and-forth had become like a second job. Eventually she decided that it was too much of a moral sacrifice to get the prize on her desk.

The amount of money demanded is the equivalent to 18 days of work for the average wage earner in Gaza.

"The journalist who received a prize for reporting the occupation’s abuses cannot pay the cost of its violation of her basic right," she writes in an opinion piece published by MEE on Friday.

Gaza and cost of getting award

After her win, Hussaini expected some delay with the delivery of the trophy. Usually, it can take two to three months to get a shipment into Gaza, she said.

But over the course of four months of conversations with customs officials, getting answers about the package "was exhausting", she said. Palestinian employees of a logistics company, which is licensed by and was in touch with the Israeli authorities holding the package, would contact Hussaini every two weeks, giving her updates, asking her to fill out application forms and answer questions.

“At some point, I realised that maybe I wouldn’t get the trophy, but I just kept going on to release it. I was determined,” she said. “I wanted to know to what extent they would go.”

Then a month ago, a Palestinian customs clearance employee said the package was ready to be released and could be delivered to Gaza, but only once Hussaini had paid 803 shekels ($250).

“I was in shock,” Hussaini said. She called several friends and even other couriers, who were all surprised by the amount. Then she went back to the clearance employee.

“I asked her why. She told me that that’s the Israeli side. Normally the packages exclusively sent to Palestinian addresses are charged more than other packages sent to Israeli addresses,” she said the employee told her.

It was at that point, Hussaini said, that she decided out of principle that she couldn’t pay.

“The humiliating thing about this story is that I have to get a permit [for delivery] from the side that I am criticising all the time, the side whose violations I am reporting on. I am just wishing to get a permit or approval from that one side,” she said.

“This is the one thing we are not responsible for and you are imposing this on us. Why should I pay for violating my rights? It was crazy, actually.”

The Rory Peck Trust declined to comment on what had happened to the trophy it awarded Hussaini until it had spoken to the Israeli embassy in London, which it had contacted for clarification.

The UK's foreign office did not respond to MEE’s requests for comment.

Ironically, one of MEE's requests was made on 3 May, World Press Freedom Day, when the foreign office released a statement highlighting the increasing challenges journalists face globally. 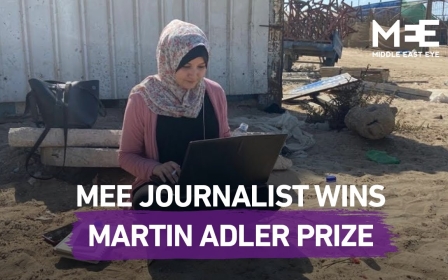 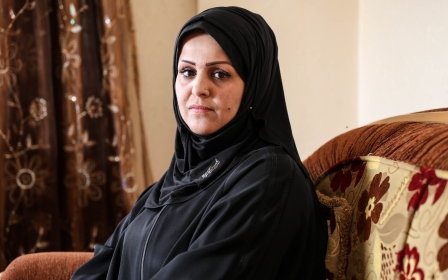