Israel PM defends US aid package against criticism, will meet Obama at UN Prime Minister Benjamin Netanyahu on Sunday defended a new $38bn US defence aid package against criticism Israel could have negotiated a larger sum had he not angered the White House.

Speaking at the start of a cabinet meeting, Netanyahu said the deal was the "largest assistance agreement that the United States has ever provided to any country in its history".

He said it "proves the depth of the relationship, and the strength of relations, between Israel and the United States".

President Barack Obama will meet Netanyahu next week in New York on the sidelines of the UN General Assembly, the White House said on Sunday.

The two leaders will have a bilateral meeting on Wednesday, with discussion topics likely to include the need for a two-state solution to the Israeli-Palestinian conflict "in the face of deeply troubling trends on the ground," White House spokesman Josh Earnest said in a statement.

Obama-Netanyahu meeting - perhaps their last - will focus on the record $38B U.S. military aid package for Israel, Palestonian issues & Iran

Earnest said the meeting would afford Obama and Netanyahu an opportunity to discuss "the strong ties between the United States and Israel".

Netanyahu hit back at political opponents who argue the country should have received a larger package in compensation for the new threats Israel says it faces due to the nuclear accord with its arch-foe Iran.

"I wish to clarify: We were never offered more," he said. "We weren't offered more money, not even one dollar more, and we weren’t offered special technologies.

"These are falsifications and fabrications by those with vested interests, they either aren’t familiar with the facts, or they are falsifying the facts, and they are of course also conveying ungratefulness, and that's the saddest part in my opinion, ungratefulness toward our biggest and best friend, the United States."

On Thursday, former prime minister Ehud Barak criticised Netanyahu over the deal, saying he could have received more money if relations hadn't been soured by Netanyahu's belligerence.

"Israel will receive $3.8bn a year - an important contribution to our security but far less than what could have been obtained before the prime minister [Netanyahu] chose to blatantly interfere with US politics."

The US on Wednesday promised Israel $38bn between 2019 and 2028 to buy advanced planes and weaponry and boost its missile defence shield, the biggest pledge of military aid in US history.

However, Barak and other critics say that an even more generous deal could have been achieved if Netanyahu had not campaigned so publicly and vociferously against a nuclear agreement with Iran which was backed by US President Barack Obama.

Frosty relations between the two leaders went into a deep chill last year, after Netanyahu appeared before the US Congress to lobby against the Iran deal. The White House viewed the appearance as unprecedented interference by a foreign leader.

"Expressing our opposition to the Iran nuclear deal was certainly legitimate," Barak wrote.  "But instead of holding a candid dialogue behind closed doors with President Obama, Netanyahu went behind his back."

The previous 10-year aid package had amounted to $30bn, but did not include the $5bn US assistance for missile defence contained in the update. 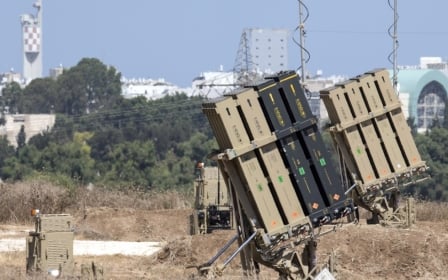 Inside Israel
US gives Israel $38bn in military aid. Twitter goes to war