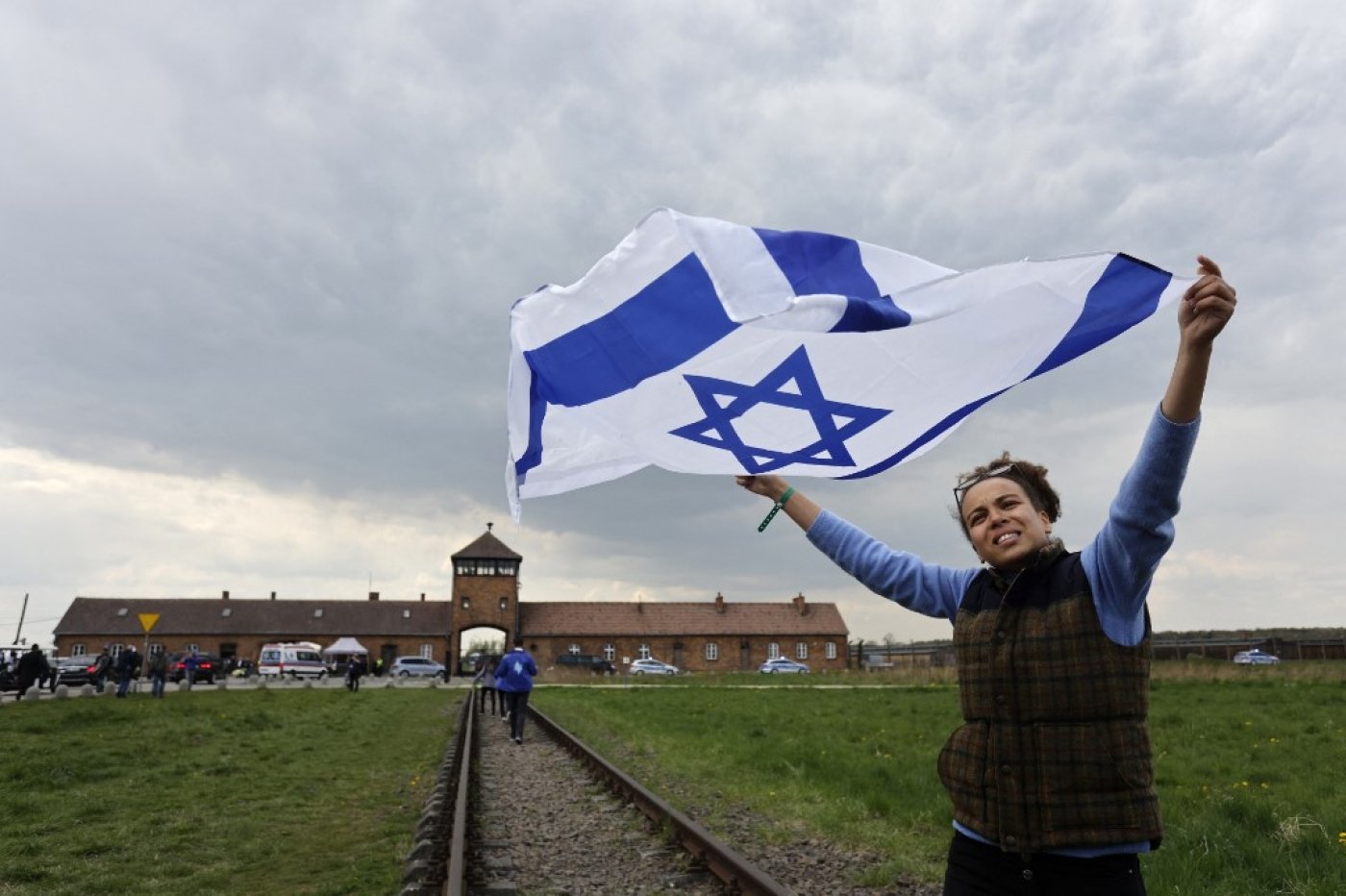 A participant holds up the Israeli flag at The March of the Living at the site of the former Auschwitz-Birkenau camp in Poland to honour the victims of the Holocaust, 28 April 2022 (AFP)
By
Eetta Prince-Gibson
in
Jerusalem

It is an emotional rite of passage for most Israeli Jewish teens. Every year, some 40,000 high school students, most in 11th or 12th grade, travel to the Nazi death camps in Poland.

Arranged by schools, youth movements, and private institutions, these delegations are intended to teach the participants about the Holocaust and memorialise the victims. Set before the students' upcoming compulsory military service after high school graduation, the trips are critical in forming their identity as Jews and as Israelis.

This summer, according to data provided by the Israeli Ministry of Education, some 127 delegations, comprising approximately 14,000 students, were expected to go to Poland in July and August.

But in mid-June, then-foreign minister (and now prime minister) Yair Lapid announced that Israel was cancelling all of these trips, effective immediately.

'Poles can't tell us what to teach Israeli children'

The immediate reason for the cancellations was the Polish government's newest interpretation of its Act on the Institute of National Remembrance.

Passed in 2018, the act penalizes any overt or inferred speech that claims that any Polish people bear responsibility for the Holocaust or collaborated with the Nazis.

In accordance with this interpretation, the Polish government insisted that it be involved in determining the educational content of the Israeli student groups.

"Poles can't tell us what to teach Israeli children," Lapid told the media.

Poland also objected to the carrying of weapons by Israeli security personnel on Polish soil during these trips, which have been taking place since 1986 when Poland and Israel renewed diplomatic relations. But the cancellation of the trips, which have over time created a broad economic infrastructure within Poland of hotels, guides, guards, and so forth, points to the increasing tensions between the two countries.

At the same time, while Lapid's decision was widely supported in Israel, it also generated hot debate within the country regarding the purpose, content, and timing of the trips to the concentration camps.

Tensions between Israel and Poland have been growing since 2015, when the national-conservative Law and Justice Party rose to power and enacted policies seen as hostile to Israel and Jewish people.

Relations became even more strained with the passage of the 2018 legislation, referred to in Israel as "the Holocaust Law," that crushed any discussion about Polish antisemitism and involvement in the Holocaust and populistically encouraged Poles to see themselves as noble, heroic victims, first of the Nazis and subsequently of the Soviet Union.

Then, last year, another diplomatic crisis was sparked when Poland's parliament approved a law that placed limits on the ability of Jews to seek restoration of property they owned before the outbreak of the Second World War that was seized by the Nazis and later nationalised under communist rule. This diplomatic spat led to a downgrading of ties. There was some improvement in relations when Poland helped get Israelis and Jews out of Ukraine when the war began. And in early July, Israeli President Isaac Herzog and his Polish counterpart, Andrzej Duda, announced the revival of bilateral ties, and, in July, the Israeli ambassador to Poland presented his credentials to the Polish president, despite the cancellation of the trips.

However, yet another squabble arose in late July, when representatives of the Polish Film Institute who had provided Israeli filmmaker Barak Heymann with a grant of 188,000 shekels ($54,500) to complete a film about recently deceased sculptor Dani Karavan demanded the money back.

The film deals with Karavan's concern that an installation he had created in Poland, dedicated to Poles who tried to save Jews during the Holocaust, might be exploited to further the nationalist agenda of the Polish government.

Polish officials are demanding their money back because, they said, the film "distorts history" as it includes experts who claimed that only a relatively few Poles did attempt to save Jews.

Heymann launched a crowdfunding campaign, which quickly reached its target goals, along with many comments from contributors who declared they were contributing to ensure that Poland would not be allowed to rewrite history.

'We were also victims of the Nazis'

A Polish journalist, speaking to Middle East Eye on condition of anonymity because he was concerned for his welfare if he spoke publicly against his government's position, said he supported Israel's decision.

"Poland is ruled by a nationalist, right-wing government that panders to its right-wing constituency with tales of victimhood and heroism," he said.

"Allowing the government to dictate the content of these trips would expose Israeli children to distorted information. Israel is doing the right thing, both for Israel and for Poland."

'For Jews who travel to Poland and Christians who travel to Israel, these are pilgrimages, which are about strengthening the faith, building identity and creating narrative'

However, he also expressed concern over what the students learned about Poland on these trips.

"Antisemitism has always been rampant in Poland. Very few Poles helped the Jews, and many Poles betrayed their Jewish fellow citizens. All that, sadly, is very true," he said.

"But at the same time, as a Pole, I, too, have a historical identity as a victim of persecution. We were also victims of the Nazis. We were under full occupation, and we never had a government like Vichy that collaborated.

But past and current Poland are of no interest on these trips, says Jackie Feldman, professor of sociology at Ben Gurion University of the Negev, who has researched both the trips to the Holocaust sites and Christian pilgrimages to the Holy Land and draws an analogy between them.

"For both Jews who travel to Poland and Christians who travel to Israel, these are pilgrimages, which are about strengthening the faith, building identity, and creating narrative," he says.

Indeed, some of the current debate in Israel focuses on the narrative. According to anthropologist Idan Yaron, who has researched this topic, the narrative taught by most of the trips enforces the historical idea that the Jews stood alone in the Holocaust and had neither a state nor an army to defend them. Thus, they must become loyal citizens of the state, serve in the army, and maintain a strong sense of Jewish pride.

Commentator Anshel Pfeffer, writing in the liberal daily newspaper Haaretz about the cancellation of the trips, argued that this was a "woefully incomplete and parochial way" to teach history.

Feldman agreed. "I don't think that this narrative is distorted or not true to history. But I think it is limited. If the trip is not harnessed solely to a nationalist-pilgrimage narrative, it could become an enlightening experience," he said.

"The students could ask themselves questions about how they would have responded under those circumstances. This could lead to strong humanist messages about universal morality and human nature, and about Jewish and Israeli responsibility to other peoples, such as African refugees, Ukrainians, and others."

Some of these difficulties, said Feldman, were inherent to the age of the students, and the format of the trips they go on.

"Because it's become a rite of passage," he said, "the kids all think they 'have' to do it, even if they don't want to or don't have any real interest, In general, 16-year-old kids anywhere in the world don't behave on buses or field trips, and most don't have the maturity for this kind of experience.

"If the country thinks this is an important experience, then they should put money aside for people to go after their army service."

In fact, claimed Noah Efron, a professor at Bar-Ilan University and a host of The Promised Podcast on Israeli politics, the trips served as a motivational tool before the kids were conscripted into the army.

"Some of the kids come back filled with rage at what happened to our people, and they take it out during their service," he said.

'I became more right-wing on the trip'

Although the Israeli Ministry of Education sets the overall guidelines for the trips, they vary widely according to the preparation and themes that different schools emphasise and according to the guides who accompany the students.

Eli Elihi, 21, now an officer in the Israeli army, told MEE that his trip to Poland left a profound impression on him that had continued to this day. Elihi attended a well-regarded secular school in Jerusalem, and recalled that the students prepared for the trip for months.

"We learned about the camps, but we discussed moral and ethical issues, too. For instance, we thought about whether we, as Israelis and Jews, should also memorialise the non-Jews who were murdered in those camps," he said.

'In Israel, we often say "never again," but I think we must mean "never again for anyone," not just for Jews'

"We decided that while the Nazis singled out the Jews for annihilation as a people, we should also think about the other peoples who died there. And we talked a lot about the lessons we should learn.

"In Israel, we often say, 'never again,' but I think we must mean 'never again for anyone,' not just for Jews."

Meir Agami, 23, recently completed his military service in a combat unit. He attended a religious school in a suburb of Tel Aviv and did not recall any preparation for the trip to the death camps.

He said that the experience "made him angry because of what happened to my people. I know that the Jewish people have to be strong and that Israel has to remain a Jewish state because no one else will do anything for us. I became more right-wing on the trip."

Feldman concluded that "the trips to Poland are very important, even if I have reservations about some of the content and formats, and the age of the participants.

"But these are Israeli decisions, and they should certainly not be made by the Polish government."

Editor's note: A previous headline referred to "Poland's Nazi death camps". It has been updated to reflect that the Nazi death camps were located in German-occupied Poland and were not themselves Polish. 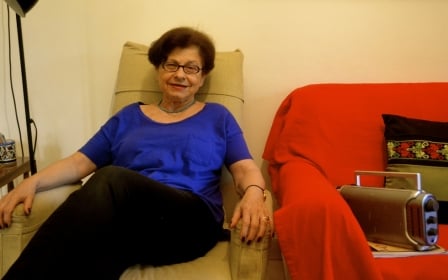