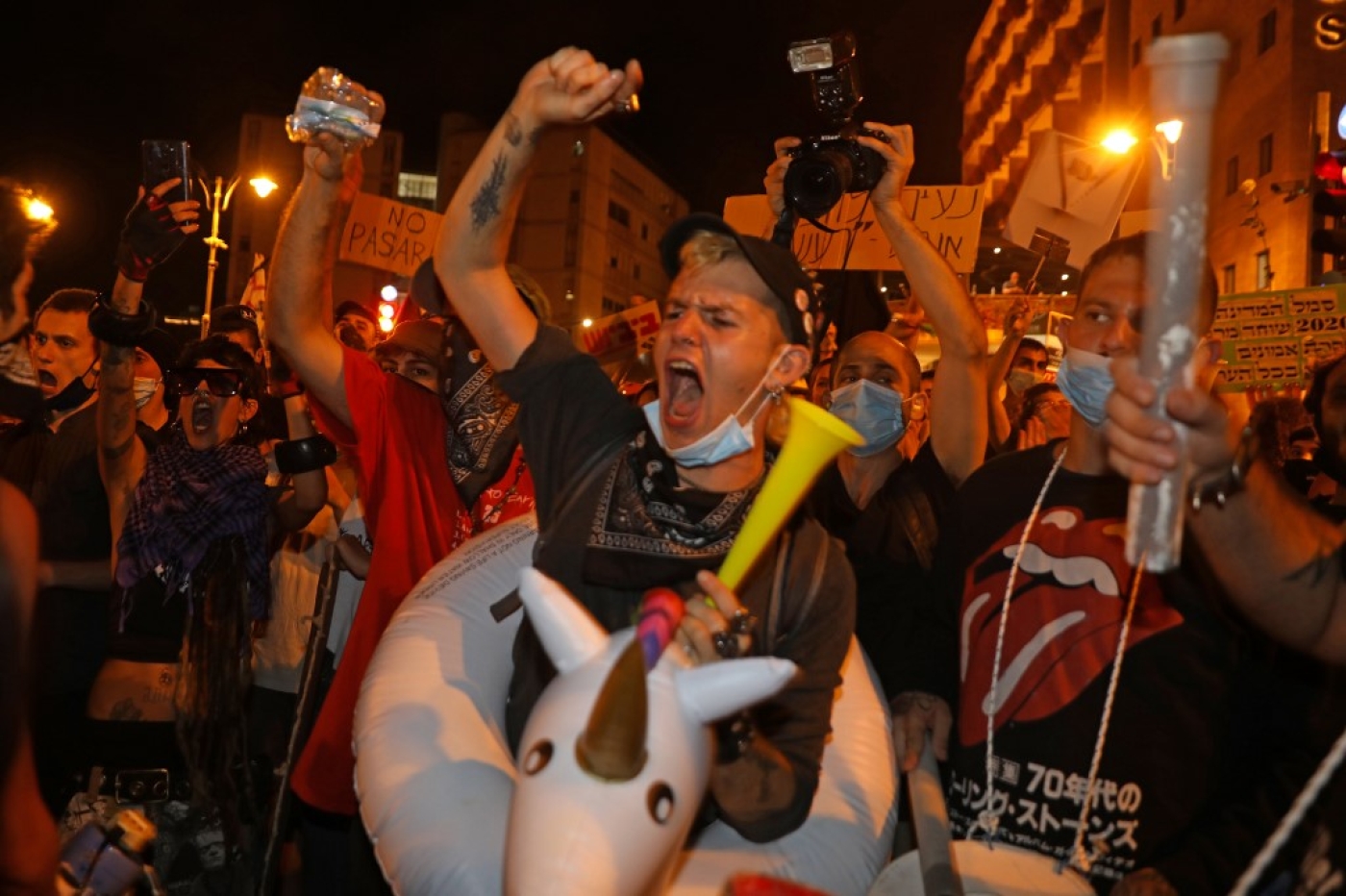 Around 4,000 Israeli demonstrators gathered and protested on Thursday's night in front of the official residence of Prime Minister Benjamin Netanyahu on Balfour Street in West Jerusalem.

Protests have been ongoing since mid-July, with activists calling for Netanyahu to step down over charges of bribery, breach of trust, and fraud.

They have also criticised the government's “mismanagement” of the coronavirus pandemic, a second wave of which hit the country in June, causing unemployment to soar to 21 percent.

As of Friday, 442 Israelis had died of Covid-19 since the virus hit in March.

Supporters of Netanyahu also gathered in Gaza Street in West Jerusalem, while anti-Netanyahu demonstrators were adjacent to the Paris roundabout. The area has become the stage for protests almost every evening.

Israeli police said in a statement that 20 detainees will face trial before the Magistrates Court in Jerusalem, releasing 19 of them under “restricted conditions” and extending the detention of one of them.

Israeli police have been using water cannons and barricades to disperse the crowd and separate the supporters of Netanyahu from the anti-government protesters.

Protestors have shouted slogans and carried out placards saying “Netanyahu is corrupt,” “Bibi leave,” and “Get out of here,” asking him to resign.

An Israeli bill to ban the practice of conversion therapy for members of the LGBTQ community has been approved in a preliminary vote, according to Haaretz.

Benny Gantz, head of the Blue and White political alliance, who voted in favour of the bill, said that “conversion therapy… belongs outside the law".

The left-wing Meretz party has sponsored and proposed the bill, which was met with strong opposition from the ultra-Orthodox parties in the Knesset.

The bill is yet to go to a second and a third vote to be enshrined into law, with 42 MKs voting in favour and 36 against it.

The bill is critical as it will prevent psychologists from providing the so-called therapy, a pseudoscience that alleges to make LGBTQ people heterosexual. The practice will become illegal under the new proposed bill.

Shas and United Torah Judaism, two ultra-Orthodox parties, have rejected the bill, and are blaming Prime Minister Benjamin Netanyahu for “failing to enforce coalition discipline,” after the Blue and White party, part of the coalition government, voted in favour.

Nitzan Horowitz, the MK of Meretz party who pushed the bill, has welcomed the preliminary vote, saying that “it stands against abuse and torture of people, of youth, who are in a difficult stage in life, and some people take advantage of that. This bill is about life and death.”

Amir Ohana and Itzik Shmuli have voted in favour of the bill. Shmuil, of the Labor party, is openly gay. Ohana, Israel's public security minister, is the first openly gay minister in Israel.

The chairman of Israel’s Psychiatric Association endorsed the vote. Zvi Fishel said that “the Knesset has transcended political considerations to save the lives of 'patients' taken captive by pagan 'therapists' who are violating the first rule of medical ethics: do no harm."

Poll: Blue and White set to lose to new alliance

This week, Benjamin Netanyahu has eyed up a general election in November amid his ongoing corruption trial, the coronavirus pandemic and continuing protests.

If the poll goes ahead, it would be the country's fourth election in less than two years.

Israel went to the ballot box in April and September 2019, and again in March 2020 after indecisive results.

According to two polls conducted by Maariv newspaper, Netanyahu's Likud party will still have the lion's share of seats in the Knesset, though it will lose some to the up and coming Yesh Atid-Telem alliance, founded by Yair Lapid and Moshe Yaalon after the breaking apart of Blue and White.

Maariv’s poll shows that Likud will win 32 seats out of 120 seats in the Knesset, followed by the centrist Yesh Atid-Telem with 18 seats, and the Arab Joint List that represents Palestinians inside Israel with 12 seats.

The ultra-Orthodox party of Shas will win 10 seats, with the Blue and White alliance down to nine seats. Avigdor Lieberman’s Yisrael Beiteinu will win nine seats, United Torah Judaism will get eight seats and Meretz only seven seats.

These Knesset seat allocations will likely produce a government similar to the current one, with Netanyahu as the prime minister.

On Thursday, an angry Israel President Reuvin Rivlin told cabinet ministers to “stop the talk about holding an early election”.