Announcement comes after Israel revoked permits for 83,000 Palestinians to visit during Ramadan Israel's army on Thursday announced that it would begin sealing off the West Bank and Gaza Strip in the wake of a deadly Palestinian shooting attack in Tel Aviv.

The closure will be lifted at midnight on Sunday, after the end of the Jewish holidy of Shavuot, the army said in statement.

Exceptions will be made for humanitarian cases, and the closure does not apply to Palestinians who have received permits to pray at the Al-Aqsa Mosque on Friday, the first Friday of the Islamic holy month of Ramadan, it added.

Four Israelis were killed and 16 were injured in the attack on Wednesday evening, when two Palestinians from the southern West Bank entered Israel illegally and went on a shooting spree in central Tel Aviv.

In response to the attack, Israel revoked the 83,000 permits it had granted Palestinians to visit family members during Ramadan.

The United States condemned the attack, but said on Thursday that Israel's response should not punish innocent Palestinians.

"We understand the Israeli government's desire to protect its citizens ... and we strongly support that right," State Department spokesman Mark Toner told reporters.

"But we would hope that any measures it takes are designed to also take into consideration the impact on Palestinian citizens that are trying to go about their daily lives."

Meanwhile, the Israeli military surrounded the town of Yatta in the southern West Bank, the hometown of the two captured attackers. Roads into and out of the town were closed off.

"Life in the Yatta village won't carry on as usual," said Defence Minister Avigdor Lieberman. "A village that has terrorists leaving from its midst will pay the price.”

The decision to temporarily seal off the West Bank and Gaza is an additional restriction for Palestinians living in the occupied territories, where their freedom of movement is already limited as a matter of Israeli policy.

Palestinians from the West Bank must apply for permits in order to enter Israeli-controlled territory, including occupied East Jerusalem. Permits are difficult to come by, but Israel typically approves thousands of them during Ramadan, allowing a number of Palestinians to visit family in Israel or pray at the Al-Aqsa Mosque, the third holiest site in Islam.

For residents of the blockaded Gaza Strip, obtaining a permit is even more difficult. 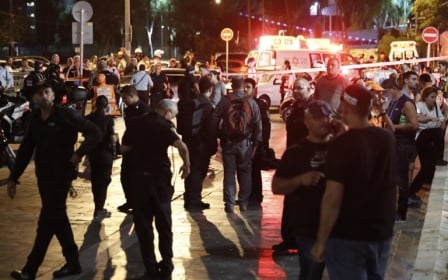