An Israeli minister was in Oman this week to propose plans for a railway linking the Gulf to the Mediterranean via Israel, marking the second high-profile visit by an Israeli official to the small Gulf country in about two weeks.

Transport and Intelligence Minister Yisrael Katz was expected to make his pitch for the rail link at the annual meeting of the International Road Transport Union, AFP news agency reported.

The "Tracks for Regional Peace" initiative calls for a railway connecting Saudi Arabia with the Mediterranean Sea, according to local media.

The line would extend from Haifa, Israel's largest port, passing through Jordan before connecting with existing railways in the Gulf.

Katz’s visit to Oman comes on the heels of a surprise meeting between Israeli Prime Minister and Oman’s Sultan Qaboos bin Said in the country's capital, Muscat, late last month.

Netanyahu’s trip to Oman was the first in more than 20 years by an Israeli prime minister.

Miri Regev, Israel’s sports and culture minister, was also in the United Arab Emirates in October, where she attended an international sporting event and toured a mosque.

The visits are part of Israel’s larger effort to build ties to Gulf states, including Oman, the UAE and Saudi Arabia, and capitalise on growing hostility toward Iran, both in the region and the Donald Trump administration in Washington.

In fact, the Trump administration has argued that bolstering Israel’s ties to Arab countries in the region will help promote peace with the Palestinians.

On 31 October, Greenblatt also said it was "good for all" to have Washington's allies in the region - the UAE, Bahrain and Oman - make "make statements and/or gestures signaling warmer ties" with Israel.

Kat’s office, meanwhile, said Greenblatt’s comments signal the “first time the US publicly and officially endorsed” the railway project, according to The Times of Israel.

“This is a dramatic development that may influence many countries in the region,” Katz’s office said in a statement.

The minister has held intensive contacts with US and Arab officials regarding the plan for the past two years, his office said, as reported by The Times of Israel. 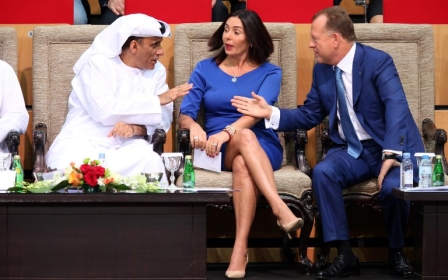