Legislators from the centre-right Yesh Atid faction joined lawmakers to its left, giving the appellants enough votes to raise the issue of Jewish Power’s candidacy in committee.

Anger erupted after Prime Minister Benjamin Netanyahu brokered an accord between far-right parties Jewish Power and Jewish Home (HaBayit HaYehudi) last week to ensure that neither ran alone in the elections.

Netanyahu’s professed support for the Jewish Power party has sparked outrage in Israel. The party's representatives are followers of the late Meir Kahane, a far-right Israeli lawmaker and rabbi who advocated driving Palestinians and other non-Jews from Israel and the occupied territories.

If Netanyahu's coalition wins the election, he has promised to appoint a Jewish Power member to a powerful committee that selects Israeli judges.

Netanyahu’s ruling Likud party is also expected to challenge the candidacy of Balad, a party representing Palestinian citizens of Israel, asserting that its call for a “state of all its citizens” should disqualify its candidates, as it conflicts with the definition of Israel as a “Jewish” state - a formulation that Israeli law requires Knesset candidates to sign off on.

Yesh Atid party leader Yair Lapid is expected to support Likud’s effort to oust Balad, even though past efforts to do so were unsuccessful.

Israeli Interior Minister Aryeh Deri announced that asylum seekers from Sudan - including those who fled the war-torn Darfur, Nuba Mountain and Blue Nile regions of the country - will remain ineligible for basic health coverage and other basic rights guaranteed by residency status, Haaretz reported.

“I did not find it correct to order any change in residency permits of Darfuris,” Deri wrote, adding that his directive applied “for the time being” and that he could reconsider this decision in two months’ time, after Israel holds national elections in April.

Deri’s decision follows an order from a Jerusalem district court judge to explain how asylum seekers are expected to live while they wait for the state to respond to their asylum requests. For Africans in Israel, these delays can last years and, in some instances, over a decade.

Asylum seekers from Sudan first started arriving in Israel in 2006, and continued to enter the country until 2013, when the Israeli government completed work on a high-tech fence running along the state’s southern border with Egypt.

To date, more than 3,000 Sudanese citizens have submitted asylum requests to the Israeli government. Only a single applicant has been approved, after a years-long legal battle that reached Israel’s Supreme Court.

The head of Israel’s Health Ministry, Yaakov Litzman, is suspected of using his powerful position to secure relief for a convicted sex offender, Channel 13 News reported.

Israel’s acting health minister since 2015, Litzman and his top staffer are suspected of pressing an Israeli psychiatrist to include the prisoner in question among a list of sex criminals to be made eligible for rehabilitation, the necessary first step towards possibly shortening a convict’s sentence and releasing them early from incarceration.

The sex offender is a member of the ultra-Orthodox Jewish denomination represented by the parliamentary delegation that Litzman leads.

A statement from Litzman’s office called the charges “lying slanders that never occurred”, stating that Litzman “is strict about not intervening in the work of professionals”.

Earlier this month, Litzman was questioned by Israeli police over accusations that he directed doctors to determine that an Australian school principal who fled to Israel was not fit to stand trial in her home country, where she is accused of sexually abusing some of the students in her charge.

The doctors were reportedly pressured to comply and back the school principal, who is also a member of Litzman’s ultra-Orthodox movement, or lose their government contracts.

Barkat, the ninth candidate on the ruling Likud party’s electoral list in the coming national elections, is said to have a net worth of half a billion shekels ($138 million).

The changes in the list’s top echelons since Forbes last published its rankings in 2015 have been due to changes in political, not financial, fortunes.

Barkat’s sister-in-law Alona Barkat joined the list in the second position when she was named the number three candidate for Bennett’s fledgling party, The New Right. She is believed to be worth 460 million shekels ($127 million).

Rounding out the list’s top five is Labor party leader Avi Gabbay, said to be worth 29 million shekels ($8 million). He is closely followed by Welfare and Social Services Minister Haim Katz of the Likud, whose 28 million shekels ($7.74 million) pushed him ahead of the lawmaker he trailed on Forbes’ 2015 list, Yesh Atid faction leader Yair Lapid and his 25 million shekels ($6.91 million).

Lapid’s running-mate in the Blue-and-White party, Israeli Resilience faction leader Benny Gantz, has an estimated net worth of 8 million shekels ($2.2 million), according to Forbes. 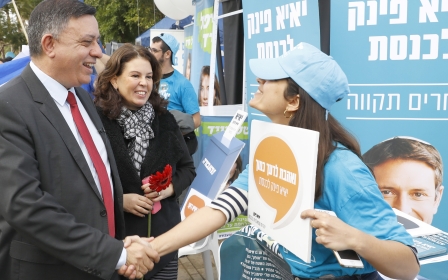