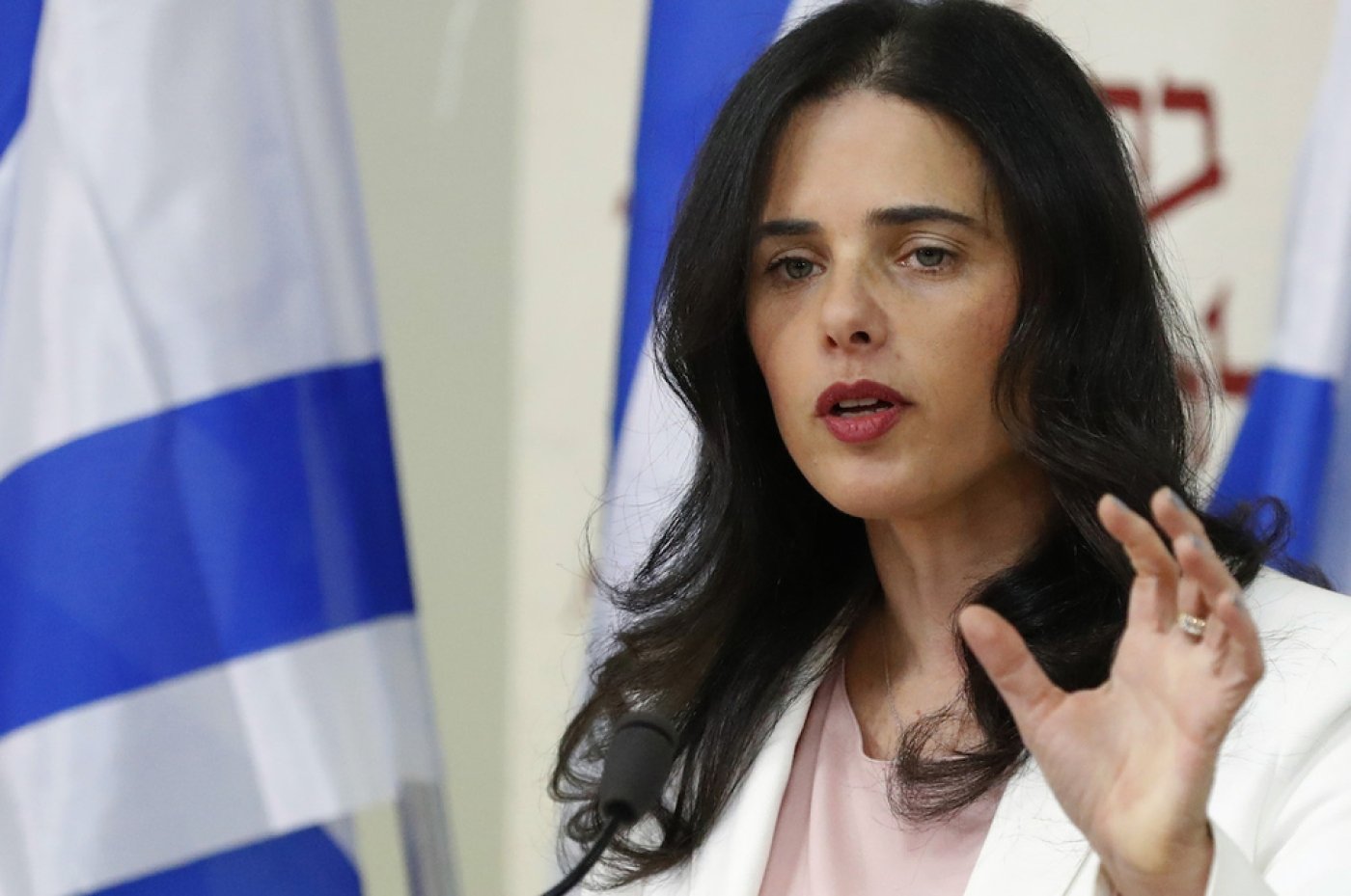 After Israeli security services detained five Jewish teenagers over suspicions that they killed a Palestinian woman in the West Bank in October, the suspects received an outpouring of support from religious figures, right-wing activists, and even Israeli Justice Minister Ayelet Shaked.

Shaked first spoke over the phone with the mother of one of the teenagers. She then met with the boys' families on Monday to hear their concerns.

About 1,000 Israelis, including right-wing politicians and leaders of the settlement movement, protested outside Prime Minister Benjamin Netanyahu’s residence in Jerusalem on Saturday night in support of the suspects, Israeli Channel 10 reported.

Aisha Mohammed Rabi, a 47-year-old mother of nine from the town of Biddya, was killed on 12 October 2018, when a stone thrown at her car struck her head while she was driving near Nablus, in the northern West Bank.

Tamar Zandberg, leader of the leftist Zionist party Meretz, slammed Shaked for accommodating the parents’ requests for an audience.

“The justice minister is continuing to fertilise the settlers’ poisonous gardens. Instead of doing soul-searching, she’s making electoral calculations and has run into the arms of the families of people accused of terrorism. If a Knesset member had done this with Palestinian families, he would already have found himself in the Shin Bet’s cellars,” she said.

The five suspects are students at Pri Haaretz religious seminary in the Jewish settlement of Rehelim in the occupied West Bank, which is illegal under international law. In January, the students received religious instruction from Rabbi Yitzchak Ginsburgh, sponsor of The King’s Torah, a racist tract that sanctions the killing of non-Jews.

In head-to-head contest, Netanyahu has slim lead over Gantz

The latest Channel 10 poll has revealed that despite ongoing criminal investigations into the activities of Benjamin Netanyahu, a plurality of Israeli citizens would still prefer he stay on for another term as prime minister.

Still, Netanyahu's lead is more tenuous than ever, the poll showed.

When given just two choices for who should lead the country – Netanyahu or Israeli Resilience party chairman Benny Gantz – 41 percent of Israelis polled chose the former, compared to 38 percent who chose Gantz. The remaining 21 percent of respondents said they were undecided.

These results should be taken with caution, however, as Israel is a parliamentary system and does not actually choose their head of state directly, unlike in the United States or other republics.

With three months before the elections are scheduled to take place, Gantz has yet to speak at any length in public about his political vision.

The Israeli parliament has approved two requests from lawmakers on opposite sides of the political spectrum to split from their current parties in order to run in the upcoming elections on independent tickets, far-right news website Channel 7 has reported.

A parliamentary committee approved Degel HaTorah MK Uri Maklev's request to withdraw his faction from the ultra-Orthodox United Torah Judaism (UTJ) party, which gets its support from religious Jews of European descent.

UTJ's Knesset contingent is made up of two political camps that run in elections separately, Degel HaTorah and Agudath Israel, but typically unite into a single party after the vote.

Ultra-Orthodox news site Bhol also reported that the same factions are negotiating with Shas, a party that represents religious Jews of Middle Eastern descent, to explore the possibility of all ultra-Orthodox parties running on a single ticket.

The Knesset House Committee also granted Ahmad Tibi, and the Ta’al faction he heads, permission to separate from the Joint List party. The party’s other factions – Hadash, Balad and Ra’am – are expected to maintain the alliance that they formed in advance of the previous round of elections for the Knesset in 2015.

Ta’al insiders told Israeli daily Haaretz that their faction would run on its own because the other Joint List factions rejected Tibi’s plea to allow Palestinian citizens of Israel – the vast majority of the party’s voters – to choose their preferred candidates, and determine the relative strength of each faction within the party slate.

The Israeli government has authorised the expansion of an Israeli town in a particularly sensitive area of the occupied West Bank, which would constrict the collar of Jewish settlements that surround the Palestinian city of Bethlehem, Haaretz reported.

Israel’s Defense Ministry’s Civil Administration announced that 118 hectares would be allocated to the Ministry of Housing “for the purpose of planning a residential neighbourhood”.

Once it is built, the new neighborhood of Givat Eitan would extend from the town of Efrat right up to Bethlehem’s southern city limits, abutting the Palestinian village of Artas.

Israeli human rights organisation Peace Now denounced the move, calling it “a lethal blow to the chance of peace and a two-state solution”.

The group is appealing the decision to Israel’s High Court.

Previous attempts to advance plans for the construction of Givat Eitan were scuttled in 2013 and 2014, due to fears that it would trigger international pushback.