Two Palestinians were injured and three others arrested on Monday in a confrontation with the Israeli army and settlers at the eastern entrance of Qusra village, according to local media.

The confrontation came on Monday morning after settlers along with Israeli soldiers tried to storm the village.

Ahmed Fayez Darwish, a young man from Qusra, was shot in his chest and he was taken to Rafidia hospital in Nablus.

Settlers set a fire in the fields that belong to the inhabitants of Qusra.

The Israeli military did not issue a statement regarding the clashes at the time of publication.

The Israeli army held Odeh's body for more than 24 hours and refused to allow Palestinians from approaching the site where he was killed.

On Friday evening, an Israeli military vehicle delivered Odeh's body to the Palestinian Red Crescent ambulance at Jeet Junction, the main road junction that leads to Nablus city. He was buried in his hometown on Saturday.

According to the Oslo Accords of 1993, Qusra was designated as Area B under Palestinian and Israeli control, while the lands and fields of the village were designated as Area C which is under full Israeli military and civil control.

Palestinian farmers from Qusra struggle with the Israeli army and settlers whenever they want to reach their fields to tend them. 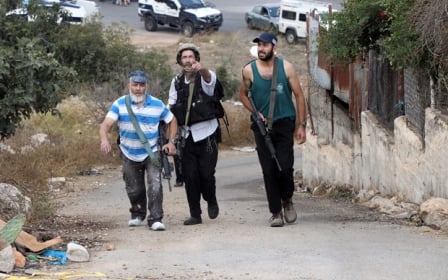