Avichai Mandelblit under pressure from government after indicting prime minister on charges of bribery, fraud and breach of trust Israel's embattled attorney general is reported to have said he suspects Prime Minister Benjamin Netanyahu has a hand in a plot to oust him, as a long-rumbling conflict between the government and judiciary comes to a head.

According to Haaretz newspaper, Avichai Mandelblit confided in private conversations that he believes that a number of political manouveres by acting state prosecutor Dan Eldad may be linked to Netanyahu.

Mandelblit in January indicted Netanyahu on charges of bribery, fraud and breach of trust, making Israel’s longest serving prime minister the first to face criminal charges while in office. The trial, which was set for March, has been pushed back to 24 May in response to the coronavirus pandemic.

Netanyahu, meanwhile, has charged that he is the victim of a politically motivated "witch hunt".

Mandelblit's claims are part of a power tussle with Eldad. The attorney general was opposed to Eldad’s temporary appointment in February, believing him to be unsuitable for the position. He then ordered senior prosecutors to brief him on Elad's actions. Mandelblit's concerns grew when Eldad ordered an investigation into Fifth Dimension, a company linked to Benny Gantz, then Netanyahu’s chief rival, ahead of the March election, without consulting the police.

The attorney general is also said to have considered Eldad’s frequent meetings with justice minister Amir Ohana, a Netanyahu loyalist, as being excessive. Mandelblit's suspicions were only increased when Eldad failed to give a full account of those meetings when pressed.

Eldad on Sunday asked a state investigator to look into Mandelblit's conduct while serving as military advocate general during the so-called 2010 Harpaz Affair, when a military officer circulated a false document in an attempt to influence the appointment of the next chief of staff.

Mandelblit had been questioned in the case but cleared of any wrongdoing. Eldad said that he had asked the probe to look into “the handling of Dr Mandelblit’s case, as opposed to his own actions”, and that there was no suspicion of criminality.

The terms of the coalition agreement struck between Netanyahu and Gantz have reportedy further led Mandelblit to suspect that the prime minister is involved in the alleged plot. According to the deal, Netanyahu can veto the appointment of a permanent state prosecutor as well as Mandelblit’s successor.

His unease was reinforced when Netanyahu aide Jonatan Urich tweeted cryptically that a senior prosecutor would “soon be signing up for unemployment”.

The attorney general has denied reports that he believed there to be a plot, while Eldad told Haaretz that such a scheme was “inconceivable”.

Eldad said that the claim that prosecution officials were told to report on his actions is “a grave act of spying on their manager”. Inside Israel
Thousands protest in Israel against Netanyahu-Gantz unity government 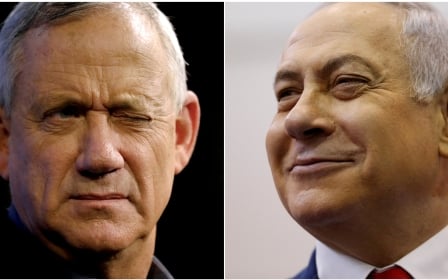