Israel’s High Court is expected to rule on Wednesday on a petition filed by local human rights groups against the state’s use of punitive home demolitions for Palestinians accused of carrying out attacks against Israelis.

Eight local human rights groups filed a challenge to Israel’s policy on November 27, arguing that punitive home demolitions constitute collective punishment – a war crime – and a violation of international law, and should be halted.

Israel has ordered the demolition of a handful of Palestinian homes after a recent spate of violence in Jerusalem, including a deadly attack at a synagogue that killed five people on November 18.

Punitive home demolitions are “an extreme, draconian power,” the groups wrote in their petition to the court. “This power has left hundreds of families and thousands of people homeless, all for the actions of an individual, and it is an affront to the most basic sense of justice.”

Demolitions act as a deterrent?

Israel’s policy is based on Emergency Regulation 119 – passed in 1945, before Israel was created – which states that any home or structure can be destroyed if its residents committed or helped carry out an offence in violation of the military laws in the area.

According to local rights groups, Israel completely demolished 431 Palestinian homes and partially demolished 59 others as punishment between 1988 and 1992. During the Second Intifada, Israel punitively demolished at least 650 homes, displacing about 4,000 Palestinians.

The Israeli government argues that these home demolitions deter Palestinian violence. But in 2005, an Israeli army committee recommended that Israel stop its use of punitive demolitions as no deterrence could be proven.

“The deterrence, limited if at all, paled in comparison to the hatred and hostility toward Israel that the demolitions provoked among the Palestinians,” the committee found. After the report, Israel ceased carrying out punitive demolitions, though demolitions based on lack of building permits, or other bureaucratic issues, continued.

The Israeli Committee Against House Demolitions (ICAHD) has reported that since Israel’s occupation began in 1967, it has demolished about 27,000 Palestinian homes.

In June, Israel re-instituted its policy of demolishing Palestinian homes as punishment after the abduction and killing of three Israeli teenagers in the West Bank.

More recently, Israel demolished the home of an East Jerusalem man who drove his car into Israeli pedestrians at a train stop, killing an infant and an Ecuadorian woman. The man, Abdel Rahman al-Shaludi, was shot and killed on the scene.

Israel’s use of punitive home demolitions “is fundamentally wrong, irrespective of effectiveness” and “contravenes basic moral standards by punishing people for the misdeeds of others”, Israeli rights group Btselem found.

But Israeli leaders continue to back the home demolition policy. On November 23, Israeli Prime Minister Benjamin Netanyahu announced that he would look into draft legislation to revoke the rights of Palestinians that attack Israelis.

The law, Netanyahu said, would “[complement] the demolition of terrorists' homes, and [help] to create deterrence vis-a-vis those who engage in attacks and incitement”. 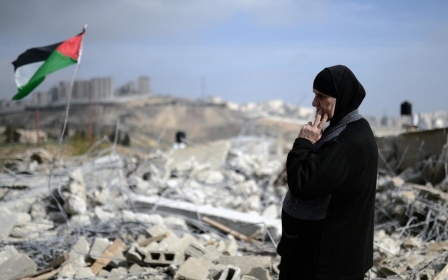