Church of the Holy Sepulchre closed for second day over Israeli tax plans, likened by church leaders to mediaeval laws against Jews 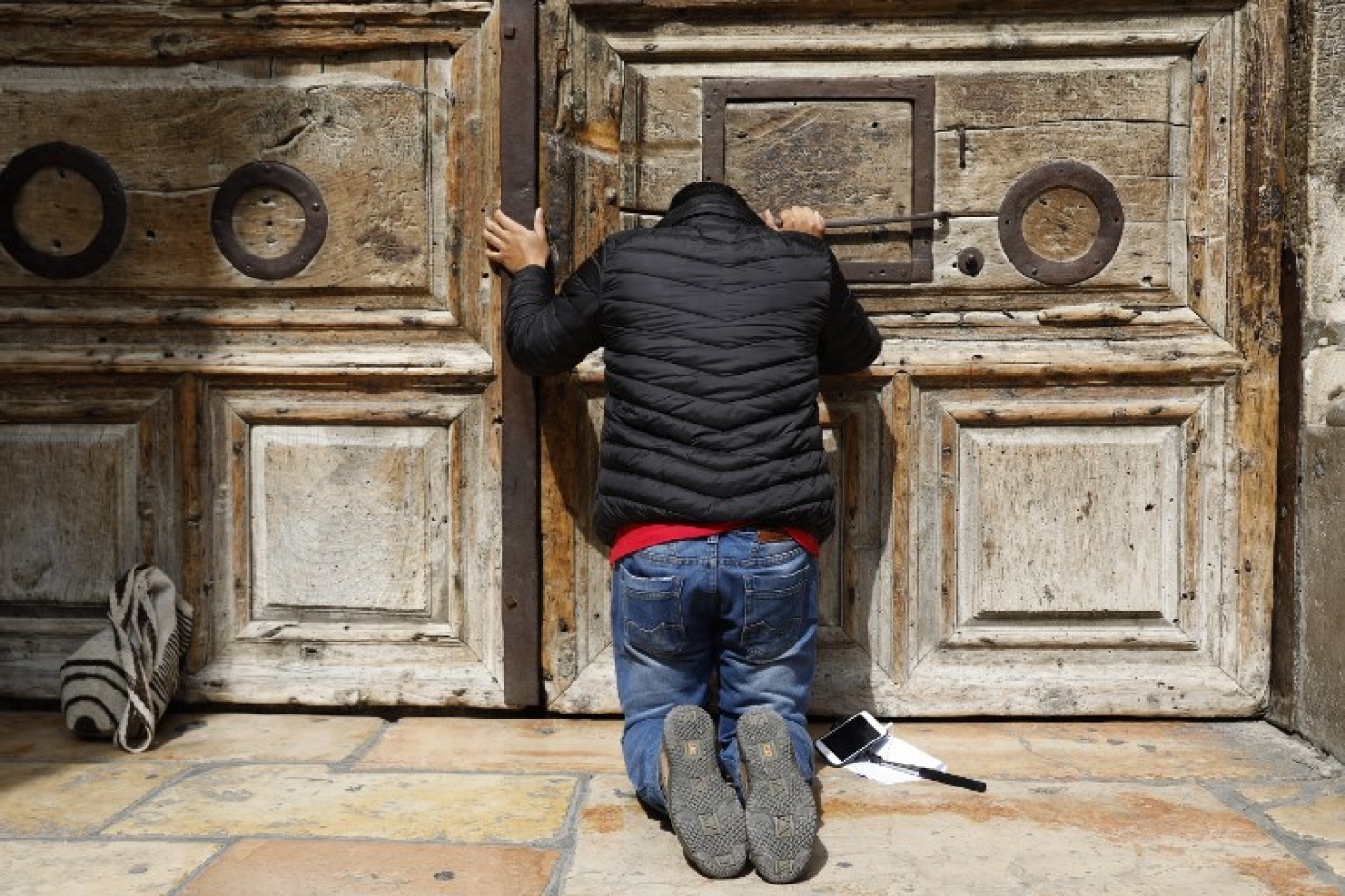 A pilgrim prays outside the closed gate of the Church of the Holy Sepulchre in Jerusalem's Old City, 25 February (AFP)
By
Mustafa Abu Sneineh

The Church of the Holy Sepulchre in Jerusalem remained closed for a second day on Monday, as leaders continued a protest against Israeli plans to tax church property.

Christian worshippers and tourists gathered in front of its large wooden doors on Monday in the vain hope of visiting the site, despite Catholic, Greek Orthodox and Armenian church leaders saying on Sunday it would be closed until further notice.

The protest began on Sunday after an Israeli cabinet committee said it would consider a bill to allow the Jerusalem municipality to collect taxes on properties owned by the church which are not used for religious purposes.

It would also allow the state to expropriate land in Jerusalem sold by churches to private firms in recent years.

Sites of worship or religious education would remain exempt from tax.

The city's mayor, Nir Barkat, said the municipality was due $186m in uncollected taxes on church properties.

"As a measure of protest, we decided to take this unprecedented step of closure of the Church of the Holy Sepulchre," the church's Sunday statement said.

Church leaders called the recent Israeli measures as "systematic and unprecedented attack against Christians in the Holy Land."

"This reminds us all of laws of a similar nature which were enacted against the Jews during a dark period in Europe," the statement added.

Christian leaders say the measure jeopardises their ability to conduct their work, which includes not only religious but also social services to those in need.

They fear that the law would make it harder for them to find buyers for their land and enable the expropriation of church land.

Control of the Church of the Holy Sepulchre is shared between Catholic, Orthodox and Armenian churches as well as smaller denominations.

The Islamic Waqf in Jerusalem (Al-Awqaf), a religious trust, condemned the Israeli tax bill on Church properties and saw it as an escalation against the Palestinian and Arab presence in Jerusalem.

Abdullah Abbadi, the manager of Al-Aqsa Mosque Directorate of Al-Awqaf, told Middle East Eye that "we condemn this bill."

"The bill will be imposed against church properties so far, but we do not know if it will extend to Muslim endowments in Jerusalem as the bill is still being drafted and the Knesset need to approve it."

Abbadi confirmed that the Israeli municipality had expropriated some properties owned by the Islamic Waqf in Jerusalem, such as bus garages and some schools.

"But we do not recognise Israeli courts, as it is an occupying power in Jerusalem according to international law, that's why we did not go to the courts to challenge their expropriation," he added.

The Holy Sepulchre is considered one of the most important pilgrimage sites for Christians. Many believe it was built at the site of Christ's burial and resurrection.

The Israeli cabinet committee on Sunday delayed by a week its scheduled consideration of the bill.

- AFP contributed to this report.