Jerusalem: the touch paper is lit

After weeks of rising tensions around Al-Aqsa Mosque, Palestinians and Israelis describe an increasingly untenable situation 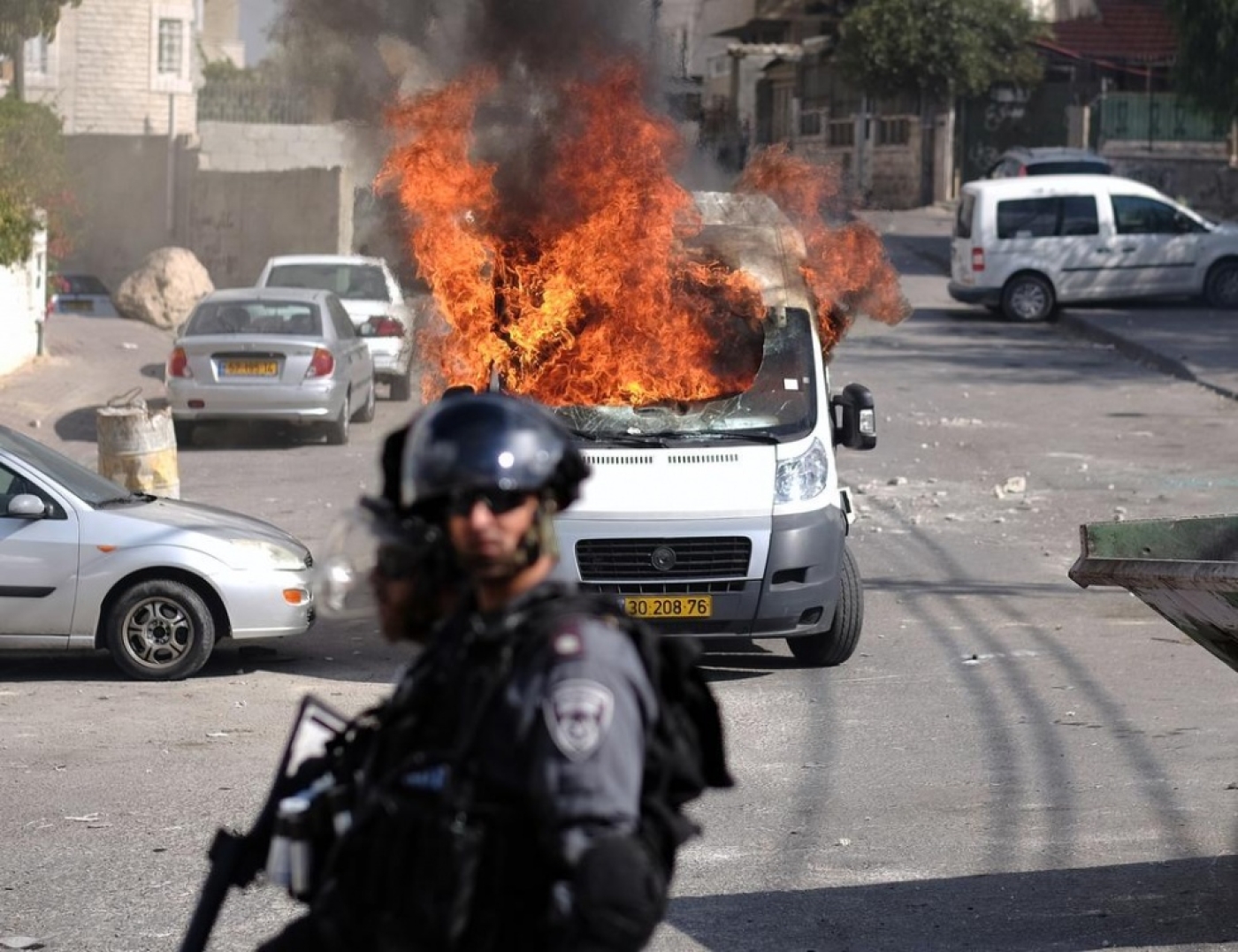 JERUSALEM - In the streets of Silwan, on the edge of Jerusalem's old city, the streets were eerily quiet on Thursday morning. After a week of regular clashes in the Palestinian neighbourhood, soldiers were nowhere to be seen, and aside from the occasional territorial stray dog, the roads were empty and silent.

Locals might well be happy for the respite. But this quiet does not indicates good news. After a turbulent week, the unrest in Silwan has moved a few kilometres uphill, to the adjacent neighbourhood of Abu Tor. It was here early Thursday morning that Mu'taz al-Hijazi, suspected of attempting to assassinate right-wing Jewish activist Yehuda Glick on Wednesday night, was shot dead by Israeli soldiers as they attempted to arrest him.

Hours after Hijazi's death, local Palestinians were still clashing with soldiers, who responded by firing tear gas and sound bombs at the protesters. By lunchtime, young men and soldiers were still facing off on the road leading to Hijazi's home, a burning bus, caught alight in the course of the confrontation, was engulfed in flame between them.

Among those caught in the recent chaos is Haneen who, now in her fifties, has lived in Silwan her whole life. Geographically and psychologically, she says, her neighbourhood is the same as Abu Tor, and for those that live here this morning brought the second shaheed, or martyr, in seven days.

Abdel Rahman Al Shaludi, who was shot dead last week after driving his car into a Jerusalem tram stop, killing two people, lived on the same street as Haneen. For the past seven days, she says, the clashes have been almost constant. “All week I haven't slept. Every night we have tear gas, sound bombs, soldiers," she explained. "There are many people getting arrested. Life is difficult here, you look around there's always something that might hurt you.”

For the Israeli authorities and public, al Shaludi is a terrorist: in Silwan, he is mourned as a martyr and a victim of Israel brutality. When he died, the 21-year-old was reportedly seeking psychological help after spending more than a year in Israeli prison; Hijazi, 32, was also recently released from jail after 11 years In a community where the majority of men have been arrested, and where the marginalisation experienced by Palestinian residents of Jerusalem is keenly felt, the response to Thursday's news has been one of collective mourning and protest, and violence has brought much of normality to a halt.

In the Old City, too, the events of the last 24 hours have precipitated a widespread shutdown. By mid-morning, the vast majority of stores are closed, and tourists wander, bemused, past the rows of metal shutters where souvenirs and trinkets are usually stacked on display. Owners sit on the steps in front of their stores, drinking coffee and smoking cigarettes.

“There's a shaheed, so of course we're making a strike,” Ziad Jolaz, 31, said. “It's bad what is happening, but it's not our fault, it's the Israelis. All the time they're going to Al-Aqsa, the holy place for Muslims. They don't let us pray there on Friday: it's a special day for Muslims, but they say you can only pray if you are more than a certain age.

“Why do they do this? It's because they want to take it. The Israeli people, they're looking for a problem. They don't want peace.”

Shutting up shop for a day is no trivial sacrifice for men like Jolaz. Business in the Old City, he says, is difficult, and tight profit margins are now being further narrowed by Western tourists that “don't trust” Arab and Muslim traders. The situation, too, is only getting worse. Jolaz believes Intifada is the appropriate term to describe the situation in Jerusalem today, and says the prickling hatred will soon escalate to something that looks more like war.

“As a Palestinian here, now, you feel that you're living, but like you're already dead," he says. "This is what's happening: imagine you take a cat – a small cat, a nice, cute cat. You take the cat and put it in a room, and beat it and starve it. What does the cat become then? It wants to bite and to scratch. To attack you. That's what's happening to the people here.

“During the second Intifada, it was a very bad time,” Jolaz continued. “But then, people were fighting about land. Now it's different. They're not fighting because of land anymore. They're fighting because of hate. Now, when one of my customers is Jewish, I see his eyes. But we cannot look at each other. When he's in my shop, our eyes can't meet. Because my heart is full.”

In the Old City, the divide Jolaz describes is not always visible: Jews, Muslims and Christians wear their religious identity freely when walking in the streets. But today, there are soldiers at every corner, and Al-Aqsa is shut to any visitors. At intersections where dark-blue barricades stand between worshippers and the mosque, crowds of older men – many of whom work at the compound – wait in frustration, and those who want to pray do so in the streets. Desperation and frustration that Al-Aqsa is off limits is shared by almost every Palestinian in the city: knowing that the mosque will likely be restricted on Friday's holy day, too, means the population is bracing itself for an explosion.

'They aren't letting us pray'

At the Western Wall – the Jewish holy site below the Al-Aqsa compound that Jews know as Temple Mount – the situation is equally tense. Religious Jews pray as usual, but the atmosphere is charged and volatile. Earlier in the day, a group of extremists Israelis attempted to storm the Al-Aqsa compound. Religious celebrations, with traditional music and blue and white balloons, are scattered across the complex, and right wing political protests are being held outside.

“We're protesting because they aren't letting us pray – they're the violent ones,” Rachel, a student member of the Temple Mount Faithful who described shot activist Yehuda Glick as “the most amazing person”, told Middle East Eye. “We want freedom of religion for everyone, and the right of Jews to pray on Temple Mount, which is our holiest place. We are here to express our frustration and deep concern about what's going on.” The Arabs living in the neighbourhoods of Silwan and Abu Tor, Rachel believes, get "many benefits" from the mayor of Jerusalem, but "don't appreciate" the good treatment.

Other Israelis, even in the shopping-centre calm of West Jerusalem, openly share a harder stance. “The Arabs can't come here and tell us that this is not ours,” Yossi Cohen, 69, who runs a coffee shop on Yaffa Street, said. “This is my house, it's Jewish land. You can't have it, it's mine. Maybe the Arabs have been here for some time. But if you dig into the ground, it is Jewish. Jerusalem is a Jewish place.”

That some Israelis hold this attitude will come as no surprise to the people of Silwan, who during the last month have seen more than 20 apartments in their neighbourhood taken over by settlers. Many locals link the latest outburst of violence to the pressures created by that development, a short 500 metres from Al-Aqsa, which they say exposes locals to violence from soldiers and settlers, and marginalises Palestinians in their own communities. And as Silwan and Abu Tor continue to burn, and locals brace themselves for another night of violence, the tension that's been escalating since the last settlers arrived in the neighbourhood is only likely to become more unbearable.

“It seems every day we have another shaheed, another arrest. Every day, again, they close Al-Aqsa, they shoot us. And all this is building into an explosion,” Tala Serhan, who at 25 has lived in Silwan for her whole life, said. She knows the future is uncertain, but has no intention of moving from Silwan. "I'm hoping, dreaming that we can live our lives in peace, on the land that is ours,” she continued. “The word in Arabic is samidoun. We're not going anywhere.”