Fleitz worked at Center for Security Policy, which supports claims of Muslim Brotherhood covert campaign to influence US institutions US National Security Adviser John Bolton has served as chairman of Gatestone Institute, an anti-Muslim think-tank (AFP)
By
Ali Harb

Fred Fleitz, who was serving as senior vice president of the Center for Security Policy (CSP), was also appointed Bolton's chief of staff.

The CSP has been labelled a "conspiracy-obsessed mouthpiece for the growing anti-Muslim movement in the United States," by the Southern Poverty Law Center, a watchdog that tracks hate groups in the US.

"An individual who held a leadership position in a notorious hate group should not be placed in a policymaking post in the White House," Robert McCaw, government affairs director at the Council on American-Islamic Relations, said in a statement.

"We urge the Trump administration to drop Mr Fleitz and to remove all other staffers who espouse bigoted views or back discriminatory and unconstitutional policies."

The CSP promotes unfounded claims that Muslims are taking over Western countries. They particularly focus on conspiracy theories about a covert campaign by the Muslim Brotherhood to influence US institutions.

A recent post on Facebook by the group falsely stated that the United Kingdom "is submitting to Sharia-supremacism".

The centre's website features leading Islamophobic figures such as Robert Spencer, who has repeatedly said that Muslim immigrants are "conquering" Europe.

Bolton himself has served as chairman of an anti-Muslim think-tank called the Gatestone Institute, whose fellows have baselessly warned of Muslim immigrants taking over the West violently.

US Secretary of State Mike Pompeo is associated with ACT for America, a group dubbed the largest anti-Muslim organisation in the country by the Southern Poverty Law Center.

Maya Berry, executive director of the Arab American Institute, a Washington-based think-tank, said the US is already witnessing the "real policy impacts" of government officials who embrace bigotry and conspiracy theories, such as Fleitz.

She pointed to the Muslim ban and the US withdrawal from the Iran nuclear deal and the Paris climate agreement as examples of policies driven by bias.

"They're setting policy while they conform to these very bizarre conspiratorial theories about the way the world works, specifically about American Muslims, about Iran and its objectives," Berry told MEE.

"At any other time, these are the people who would be on the periphery… They're now running the show."

Fleitz, also a former CIA analyst, is a foreign policy hawk who had persistently lobbied against the Iran deal until President Donald Trump scrapped it in May.

The deal, signed by Trump's predecessor Barack Obama, lifted economic sanctions on the Islamic republic in return for Tehran significantly scaling back its nuclear programme.

After a short wave of small protests in Iran in late 2017, Fleitz wrote: "This particular set of protests might die out, but they are part of what Iran expert Michael Ledeen has long predicted: an irreversible trend moving towards the day when the Iranian people topples a regime it despises."

"The White House continues to be the nation’s central organising body for white supremacists," Muslim Advocates said in a statement.

"The appointment of Fred Fleitz – a leader of the anti-Muslim and conspiracy-obsessed hate group Center for Security Policy – speaks volumes about the administration’s prioritisation of fear-mongering and racism over actual national security issues." 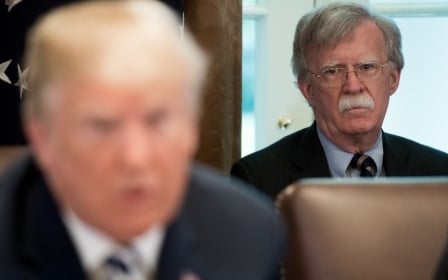