Jordanian soldiers carry the coffin of their comrade Belal Al-Zuhbi during his funeral in Nahleh village, near the city of Jerash north of Amman (AFP)
By
MEE and agencies

Jordan declared the desert border regions with Syria and Iraq "military zones" barred to civilians after a suicide bomber killed six Jordanian soldiers near the Syrian frontier on Tuesday.

General Mishal al-Zibn, chief of staff of the Jordanian army, declared the northern and northeastern border on Tuesday a closed military zone, warning they would deal with any activity in the area "without leniency".

"Any vehicle and personnel movement within these areas that move without prior coordination will be treated as enemy targets and dealt with firmly and without leniency," the army statement said.

The army did not explicitly say if the border with Syria would be closed.

King Abdullah II vowed to hit back with an "iron fist" after meeting top civilian and military officials to discuss the attack in an area where thousands of Syrian refugees are stranded.

There was no immediate claim of responsibility but Jordan is part of the US-led coalition fighting the Islamic State (IS) group in Syria and Iraq, and has been targeted by IS militants before.

It said the suicide bomber set off from a makeshift Syrian refugee camp in no man's land near the Ruqban border crossing in Jordan's remote north.

The driver entered Jordanian territory through an opening used for humanitarian aid deliveries and blew himself up as he reached a military post.

King Abdullah condemned the attack and said Jordan's armed forces would strike back.

"Jordan will respond with an iron fist against anyone who tries to tamper with its security and borders," he said.

"Such criminal acts will only increase our determination to confront terrorism and terror gangs that target army personnel who protect the security of the country and its borders."

Jordan hosts hundreds of thousands of Syrian refugees and thousands more have been stranded at the frontier since January.

Tuesday's bombing comes two weeks after a gunman, who was later arrested, killed five Jordanian intelligence officers in a Palestinian refugee camp north of the capital.

Details of that attack have been kept under a gag order while the investigation continues.

Jordan is a member of the US-led coalition against IS. It has carried out air strikes targeting the militants and hosts coalition troops on its territory.

Maaz al-Kassasbeh, a Jordanian fighter pilot, was captured by the militant group when his plane went down in Syria in December 2014 and he was later burned alive in a cage.

In March, Jordan announced it had foiled an IS plot to carry out attacks in the kingdom in an operation that led to the deaths of seven militants.

The US embassy in Amman denounced Tuesday's bombing and pledged "unwavering support" for the armed forces of its key ally.

"We join the Jordanian people in their resilience and determination in the face of this cowardly terrorist act. The United States stands together with Jordan," it said.

Amnesty International on Wednesday urged Jordan to keep its border open to refugees fleeing Syria after a deadly frontier attack prompted Amman to declare the area a "military zone".

Amnesty said Jordan's response "must not descend into closing the border and denying humanitarian aid to tens of thousands of Syrian refugees fleeing armed conflict."

"A total closure of the border and denial of humanitarian aid to the area would inevitably lead to extreme hardship among those unable to find refuge and put their lives at risk," it added.

A flare-up in Syria's war last month sparked a new influx of refugees in the no man's land. Nearly 5,500 arrived at Rukban within days in early May, bringing the total since January to more than 60,000.

Amman insists newcomers must be screened before entering the country to ensure they are genuine refugees and not militants from IS or al-Qaeda trying to infiltrate the country.

The kingdom's position has drawn criticism from the office of the UN High Commissioner for Refugees (UNHCR).

UNHCR representative Andrew Harper said he was not aware of any Syrian asylum-seekers being hurt in Tuesday's attack.

Jordan says it hosts nearly 1.4 million Syrian refugees, of whom 630,000 are registered with the United Nations.

Their presence has placed a massive strain on Jordan's economy and resources, and raised security concerns.

On Tuesday the Jordanian government spokesman said his country does not expect to build more refugee camps on its soil or extend those already there.

According to sources close to Islamists in Jordan, almost 4,000 Jordanians have joined militant groups in Iraq and Syria, where an estimated 420 have been killed since 2011. 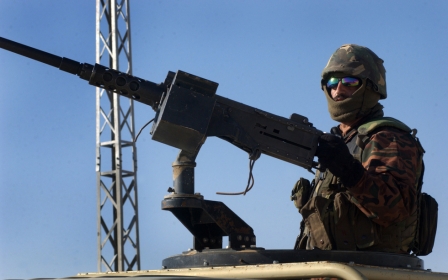