Jordanian police clashed with young unemployed demonstrators south of Amman early on Thursday, with injuries reported on both sides, officials and witnesses said.

Police said three of its officers were "shot and wounded during a raid on a group of outlaws in the Dhiban region" of Madaba, 70 kilometres from Amman, with demonstrators using "automatic weapons to fire directly" at police.

Witnesses said the confrontation broke out after police intervened to forcibly dismantle a tent being used for a sit-in by the young demonstrators calling for jobs, better economic policies and regional development.

Witnesses in local media have said that the protests were peaceful until police intervened to break them up. An unspecified number of demonstrators were also hurt.

Unemployment, according to Jordanian authorities, has been rising for more than a year and reached 14.5 percent in the first quarter of 2016. Some estimates, however, say that the figure is closer to 30 percent. Youth unemployment, like in many other Arab countries, has been stubbornly high and stands at at least 30 percent.

A police spokesperson said officers used tear gas and "adequate force" to disperse demonstrators who sealed off roads and hurled stones and fireworks at the local police station. Twenty-two arrests were made.

"Some of the trouble-makers and demonstrators used automatic weapons to fire directly" at police before security forces restored order, the spokesperson said.

The demonstrators said on their Facebook page that calm was restored after an accord was struck with government representatives, but gave no details. They posted photographs and videos of roads blocked by burning tyres and of masked youths pelting police with stones.

"The main demands of the residents of Dhiban are economic development and to have investment in the region to create jobs for people to support their families," Jamal Mohamad, a resident of Dhiban, told Al Jazeera.

"We have no political demands other than improving our dire conditions."

Dhiban, home to about 50,000 people, is one of the poorest areas in Jordan. It was the birthplace of large-scale protests in 2011 that were inspired by the Arab Spring but which largely focused on economic woes.

With Jordan's economy reeling from conflicts in neighbouring Syria and Iraq, dozens of young graduates have for the past two months held an open-ended sit-in to demand jobs. Growth slumped to 2.4 percent in 2015, down from 3.1 percent the previous year.

Inside Jordan
In pictures: Jordan's donkeys suffer from neglect in Petra amid pandemic
Inside Jordan
Jordan: Low turnout in parliamentary election amid boycott calls and Covid-19 fears
Crime
Jordanian boy who survived brutal kidnapping is reunited with his father in hospital 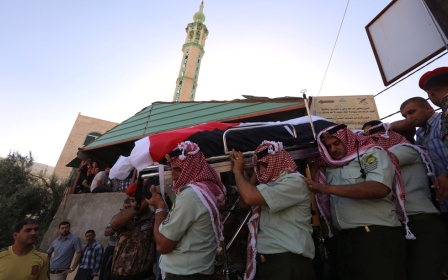