Libya, one of 12 members of OPEC, will undoubtedly be watching oil prices, which continue to plummet, with concern A senior oil official who represents Libya in the OPEC cartel has been freed after being kidnapped last month in Tripoli, National Oil Company sources said Monday.

Samir Salim Kamal, an NOC engineer who is also Libya's governor for the Organization of Petroleum Exporting Countries, had not been seen since 15 January when he left the company's offices.

"He was freed yesterday (Sunday). He is safe and sound and well," an NOC official told AFP, speaking on condition of anonymity.

No further information about the circumstances of Kamal's abduction or the identity of his kidnappers was immediately available.

A relative also confirmed Kamal was now free, but without going into further detail.

Libya is one of 12 members of OPEC, whose current secretary general Abdullah El-Badri is Libyan.

Kidnappings are common in the country, which has been sliding deeper into chaos since the 2011 overthrow of longtime leader Muammar Gaddafi, with rival governments and powerful militias battling for territory.

The internationally recognised government and elected parliament decamped last year to the far east near the border with Egypt after the Libya Dawn militia alliance seized Tripoli and set up its own administration.

Oil is Libya's main natural resource, with a pre-revolt output capacity of more than 1.5 million barrels per day (bpd), accounting for more than 95 percent of exports and 75 percent of the budget.

But production plunged to about 350,000 bpd in December as Fajr Libya launched a bloody offensive to try to seize key eastern terminals.

Libya's Central Bank will undoubtedly be watching global oil prices, which continue to plummet and will likely have a significant impact on the country's expenditures.

On Thursday, the rivals of Libya's elected parliament agreed to join UN-mediated peace talks with the internationally recognised government if they are held on home soil. 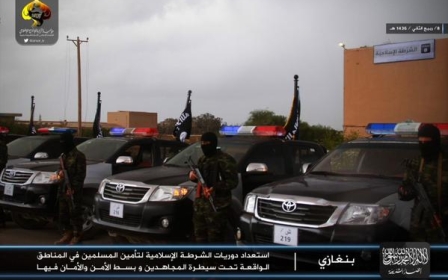