Kobane, as seen through the eyes of an Islamist rebel leader in Syria

Zahran Alloush (second to left), military leader of the Islamic Front, attends a press conference in Ghouta outside Damascus on August 27, 2014 (AFP)
By
MEE staff

The leader of a powerful Islamist rebel coalition in Syria said on Monday he planned to “liberate” the Syrian border town of Kobane from militants of the Islamic State and US-backed Kurdish fighters there, who he accused of supporting Syrian president Bashar al-Asad.

Zahran Alloush, military chief of the Islamic Front, a Salafi-leaning alliance of rebel groups that reportedly represents 45,000 fighters, said he was echoing the views of “hundreds of thousands” of rebels in Syria who fear the fight between the Islamic State and Syrian Kurdish fighters backed by US air-strikes is dragging attention away from their effort to overthrow Syrian president Bashar al-Asad.

“Kobane is a Syrian city and the residents are Muslims and we will put all efforts to liberate it, just as we are trying to liberate other cities from Asad's regime...” said Alloush in a videoed press conference. “Our views on daash (the Islamic State) have not changed. We cannot forget the horrendous crimes they have committed against the people of Syria.”

Alloush said that the PYD, a Kurdish group based in north-east Syria who have said they support neither the rebels nor the Syrian government, were also on his “enemies list”, accusing them of allying with Bashar al-Asad.

Alloush’s comments were seen as an effort to try and refocus the attention of fractured, and increasingly Islamist-dominated, Syrian opposition fighters whose battle against Asad has ground to a stalemate.

Forty two-year old Alloush is little known in the West but with the gradual weakening of Syria’s moderate opposition, the Free Syrian Army, his group, the Islamic Front, have emerged as one of the more effective fighting forces on the ground. The Islamic Front are also a key player amongst the rebel groups holding off Syrian government forces trying to recapture the strategic northern city of Aleppo.

The Islamic Front is viewed by moderate opposition figures in Syria as a violent and deeply conservative force. It has called for the establishment of an Islamic Caliphate and is accused of committing war crimes, plundering factories, and kidnapping a prominent human rights activist Razan Zietouneh from near Damascus in December 2013.

Analysts have argued that the Front’s Islamist rhetoric can be discounted as a positioning ploy and that the group is bad news for al-Qaeda in Syria because it will stem the slide toward radicalism there and be able to face down militias on their right.

While the Islamic Front includes many Salafists seeking an Islamic state in Syria, it is not affiliated with al-Qaeda, according to Hassan Hasan, an analyst at the Delma Institute in Abu Dhabi.

Others say that distinguishing the Islamic Front from Al-Qaeda is difficult given the groups’ similar ideologies.

“The difference between his (Aloosh’s) ideology and that of al-Qaida groups is not profound. Rather, it is one of shades of grey,” writes Syria analyst Joshua Landis, in a profile of Alloush. “They both embrace foreign jihadists and encourage them to come Syria to join the fight. They both call for the resurrection of an Islamic Empire…. Their political philosophy and blue print for the future is largely based on a similar reading of Islamic history and the Qur’an.”

Groups like the Islamic Front, who emerged in late 2013, present a dilemma for the US as it seeks to maintain military pressure on the Syrian government and unify the groups rallying against it but also tries to prevent weapons from falling into the hands of groups like Jabhat al-Nusra who it deems terrorists.

Earlier this year the Islamic Front drew the ire of US officials after it seized U.S. vehicles and communications gear from warehourses at the Syria-Turkey border.

The seized material had been provided to the U.S.-backed Supreme Military Council (SMC) of moderate Syrian opposition fighters.

The SMC, whose Free Syrian Army is the only opposition armed force the United States backs in Syria, has lost both strength and influence to anti-Assad Islamic groups. Among them is the al-Qaeda-affiliated Islamic State of Iraq and Syria and the al-Nusra Front, both of which have been labeled terrorist groups by Washington. 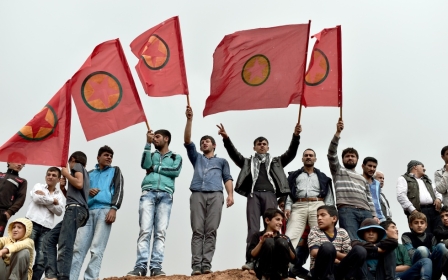