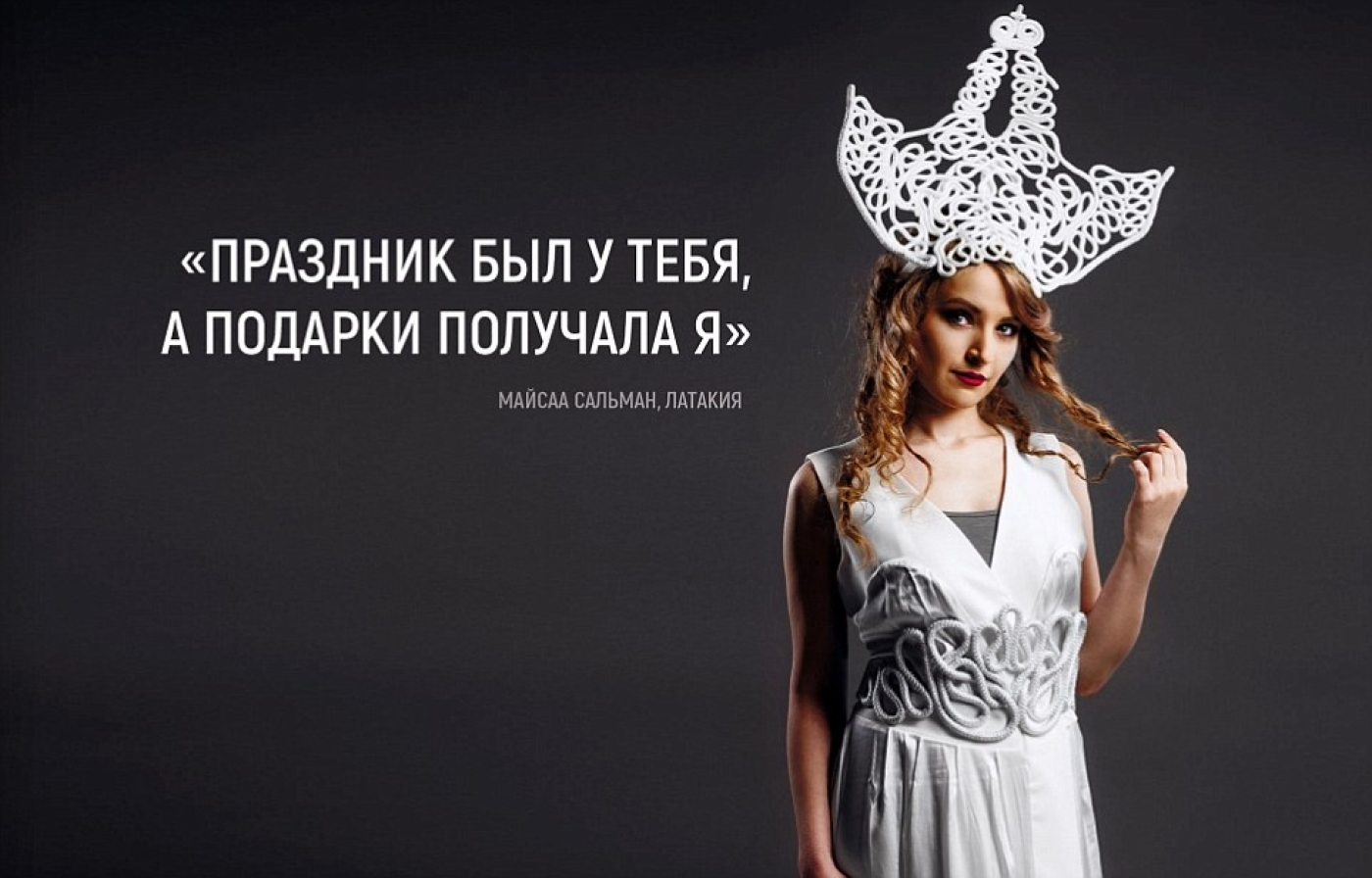 The calendar was handed out to Russian troops in Syria over the weekend, according to Russian media.

"Syrian girls prepared a present for New Year for Russian soldiers and officers, where 12 different heroine residents of Syria, each in her own way, speaks to those who daily risk their lives defending their homeland and their own," reads a press release accompanying the calendar's publication.

Translation: Miss January, Rasha Deeb, from Latakia. "I realised straight away that your intentions were serious."

Just fewer than half of the Syrian women photographed came from the Alawite-dominated regime stronghold of Latakia which is also home to Russia’s Khmeimim air base.

Three of the women featured are from Aleppo, where Russia’s bombing campaign against besieged civilians has drawn fierce international condemnation.

Two others are from Tartus, the site of a Soviet-era naval base – Russia’s last outside the former Soviet Union, and its only on the Mediterranean Sea.

Another woman is from Homs, a former opposition stronghold, and Miss December, the final participant, is from Sweida, a predominately Druze city in southwest Syria.

Translation: Miss February, Maisaa Salman, from Latakia. "It was your holiday, but it was me who got the presents." This is a reference to 23 February, which was celebrated as Red Army Day in the Soviet era and is still celebrated annually in Russia. Women traditionally give men presents on this day.

The calendar is replete with references to Palmyra, the ancient city that Russia was central to liberating from the Islamic State (IS) group in March.

It recently fell back into IS hands as Syrian President Bashar al-Assad and his Russian counterpart, Vladimir Putin, turned their attention to Aleppo, the last of the rebels’ strongholds.

Translation: Miss March, Sara Saker, from Latakia. "I was scared we would never see each other again."

The group behind the calendar are grazhdanin (citizens) from the School of Modern Art in Russia, which describes itself as a "non-commercial organisation to support and develop civic and social initiative", according to the Russian online news magazine The Interpreter.

A footnote on the cover, however, seems to suggest that the project was funded by a grant from the Russian presidency through the Russian Union of Youth.

Translation: Miss April, Carina Yunes, from Latakia. "And I offered you to move into Tartus." Assad officially gave Putin permission to set up a larger military base in the coastal city in this month.

The calendar is marked not by Russian state holidays, but key dates in Russia’s intervention in the Syrian civil war.

Translation: Miss May, Ilka al-Hatib, from Homs. "How did you know that I loved classical music?" This is reference to Prayer for Palmyra, a concert staged by Russian conductor Valery Gergiev and the Mariinsky Theatre Orchestra after the ancient city was liberated from IS.

"The Western media, speaking of events in Syria, often forgets about Russian humanitarian aid, about the exceptional bravery of Russian soldiers, about the thousands of civilians liberated from virtual slavery," the press release said.

Translation: Miss June, Lujayn Mhana, from Latakia. "I already knew how I would spend that summer."

"Each of the young Syrian women has a story, but they are united in the sense of their sincere gratitude to Russian soldiers," the statement continued.

Translation: Miss July, Fatima Duksi, from Aleppo. "To see you for at least a moment." This is a play on words, the word 'now' is spelt as MiG, which is also the name of the famous Russian fighter jets which have been used to bombard Aleppo.

"As a sign of respect for Russia and its culture, all the models put on traditional Russian hats – the kokoshnik," the statement said.

Translation: Miss August, Kamilia Searanim, from Sweida, a predominately Druze city in southwest Syria. "My Palmyra's destiny is in your hands."

The calendar's press release also said: “Recently, Western media often refer to the accounts of ‘Syrian girls’ who write in perfect English about how they suffer daily from the Russian action. But these ‘girls’ cannot even answer in Arabic on the offers of assistance.

"It's important for the organisers and participants of this project that those who are fighting terrorists know what real daughters of Syria think of them."

The girl they are presumably referring to is Bana Alabed, a seven-year-old who tweeted live updates in English from Aleppo as the city was being pounded by Russian and Syrian jets.

Bana became a sensation in Western and Arab media, which led to her account being heavily trolled by online supporters of Assad.

Kremlin-funded news outlets such as RT and Sputnik joined in on the hate campaign, with the latter calling her the "ultimate propaganda stunt".

But social media quickly accused the Kremlin of carrying out a propaganda stunt itself, with some going as far as saying the calendar was the “glamorisation of mass murder".

"The fate of my Palmira in your hands" - a page from 2017 Russian Army calendar #Russia #Syria. Glamorization of mass murder pic.twitter.com/VVt1RyOrko

'The least I could do'

One participant in the calendar, Maram Himsi, told RT: “Participation in this calendar was for me a way to say ‘thank you’ to those protecting my family and loved ones; those who are now stationed in my hometown Aleppo – and the calendar is really the least I could do to express my gratitude to the Russian soldiers.”

Translation: Miss September, Maram Himsi, from Aleppo. "Do you remember how we met?" Russia started its air campaign in support of Assad in September 2015.

Ruptly, RT's video news agency, interviewed some of the people involved in the creation of the calendar

Russian activists and media were quick to point out a series of flaws in the calendar.

The most glaring of these was that the suggestive quotes next to the women were not their own and were only added later – without their permission, according to some of the women who were photographed.

Speaking to Russian news outlet TJournal, an online media analysis website, Miss October – Yara Hassan – said: “We thought there would only be pictures, but we were shocked when we saw the calendar on the internet with these silly phrases.”

Hassan said they agreed to the photoshoot to show their support for the Russian military, but were not asked their permission to have the quotes used next to their pictures.

Film-maker Anastasia Peksheva, who is working on an upcoming documentary on Syrians living in Russia, told TJournal that the situation was “most unfortunate” for the women involved, and pointed out that Syrian expats and refugees can be “easily deceived” in foreign countries.

“They just took advantage of their trust,” Peksheva told the website, emphasising that the women were not asked their permission for the quotes to be used next to their name.

She advised the Syrian women to sue.

The group behind the project appeared to be involved in a previous project supposedly showing grassroots student support for the Kremlin’s hostile stance towards Ukraine.

Some Syrian women living in Russia took the initiative, and sent their own messages to the Russian army.

Sex and politics: Inside Putin's propaganda

The propagandisation of Putin's masculinity is one of his key pillars of maintaining his grip over Russian politics and society, experts have noted.

Translation: Miss October, Yara Hasan, from Tartus. "Tell me who your commander-in-chief is, and I will tell you who you are." This is a reference to Putin, commander-in-chief of the Russian armed forces, whose birthday is on 7 October and will turn 65 in 2017.

As Valerie Sperling notes in her book Sex, Politics, and Putin: Political Legitimacy in Russia: "By 2007, however, Putin's PR team had caught on, releasing bare-chested photos of Putin on a Siberian fishing trip - apparently responding to or echoing the "rugged outdoorsman" image used by Bush... By 2007, Putin was winning the hypothetical 'real-man' competition; in one mid-sized Russian city, 44.8 percent of Russians surveyed named Putin when asked to name a 'real man' in Russian politics."

As early as 2002, only a year after taking power, the song Takova Kak Putin (One Like Putin) was released by the female electro-dance duo Poyushchie vmeste (Singing Together) and extolled the Russian leader's manliness.

The sexualisation of Middle Eastern women for foreign consumption is nothing new to the Arab world.

Translation: Miss November, Mary Sayed Oman, from Aleppo. "Is that your carrier parked at the Syrian shore?" 12 November marks the anniversary of Russian aircraft carrier Admiral Kuznetsov's arrival to the Syrian shore.

In his seminal 1978 book Orientalism, Edward Said wrote that the Orient for outside powers represents "not only fecundity but sexual promise (and threat), untiring sensuality, unlimited desire".