Kurdish journalist 'proud' to be called 'Mr Kurd' by Trump US President Donald Trump raised eyebrows on Wednesday when he addressed a Kurdish TV reporter as “Mr Kurd” on the margins of the United Nations General Assembly (UNGA) in New York.

At the press conference, Trump called upon Rahim Rashidi, a reporter from Kurdistan TV, referring to him as “Mr Kurd”.

After another reporter announced he was Kurdish, Trump responded: "Good. Good. Great people! Great fighters. I like them a lot."

Rahim Rashidi told Middle East Eye in an email on Friday that he felt "proud" and "honoured" being addressed as "Mr Kurd".

"For [a] long time, the Kurdish people have been denied their self-right to Kurdish ethnicity," Rashidi explained.

"Kurds have experienced assimilation and genocide, simply for being Kurdish. To be addressed as 'Mr.Kurd' means a lot to me. To recognize my identity when it has always been denied is a great deal for me. Especially by the president."

“We have to help them. These are great people.” #TwitterKurds #Kurdistan pic.twitter.com/BWbzJEMyIj

But Trump's comments went viral and sparked a discussion on social media, with Twitter users divided over whether they were offensive or flattering.

Incredibly rude. I still can't believe Trump addressed a reporter by their race as 'Mr. Kurd'.

I would have answered, 'Thank you Mr. Russian'

Referring to someone by their ethnicity is not that much politically correct. Not a big deal but not cool either.

I'm in no way offended by @realDonaldTrump or anyone calling me Mr. Kurd. I think he called me and a colleague that today. I'm proud to be a Kurd. I actually take it as a compliment if you call me Mr. Kurd. #MrKurd

I identify as #MrKurd and I'm totally proud of it, I don't see how it's disrespectful, I only see recognition and racial respect in the statement, and I don't even agree with Trump all that much, but y'all people need to chill.

Let me make that simple and straight. #Kurdish people always been denied by #Turkey, #Iran, #Iraq and #Syria, and those countries have always banned the word “Kurd” and prevented #Kurdistan state, so #Trump by saying “#MrKurd” he is not insulting us, he is actually praising us.

A lot of blood, sweat, & tears has gone into protecting the Kurdish identity. To be referred to as “Mr.Kurd” is anything but an insult. | #MrKurd @rahimrashidi 🙌🏼 pic.twitter.com/gXDM1Xiwsh

Who are the Kurds?

The Kurds are the fourth-largest ethnic group in the Middle East, with more than 30 million people living across Iraq, Turkey, Syria and Iran.

While they have increasingly fought for autonomy, the Kurdish people have never had a true state of their own (other than the very short-lived Republic of Mahabad in 1946).

Following the US-led occupation in 2003, Iraq’s constitution of 2005 recognised an autonomous federal region for the Kurds, known as Iraqi Kurdistan, northern of Iraq. 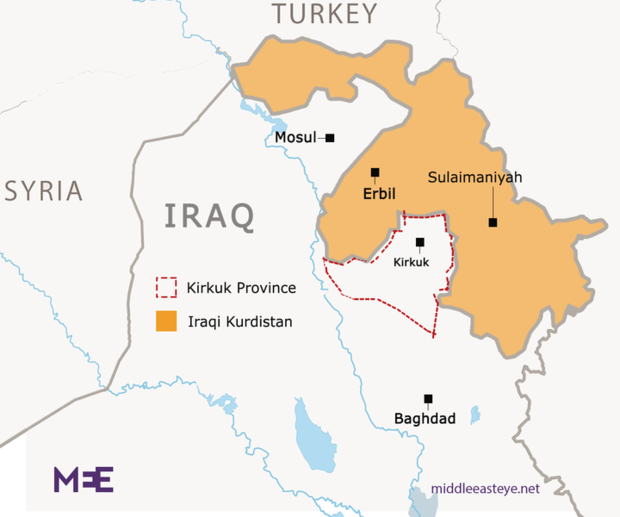 But has Trump’s administration always shown such love for the Kurdish people and their struggle?

Kurds took to the polls in the first ever independence referendum in Iraq last year, with results showing 93 percent of people in favour of breaking away from Baghdad.

The former president of the Iraqi Kurdistan Region, Massoud Barzani, said at the time: “From World War One until now, we are not a part of Iraq. It’s a theocratic, sectarian state. We have our geography, land and culture. We have our own language”.

The US said it did not recognise the vote.

US Secretary of State Rex Tillerson said days after the referendum: "The vote and the results lack legitimacy and we continue to support a united, federal, democratic and prosperous Iraq.”

Israel was one of the only countries to support the legitimacy of the vote.

However, Washington has armed Kurdish fighters in Iraq and Syria to drive out Islamic State (IS) group from their areas. Rashidi believes there is "room for improvement" in US policies towards Kurds.

"US officials have praised the Kurds for being their most loyal and trusted ally in the Middle East. Earlier this year, when Turkey invaded Afrin, the Kurds asked US to intervene, but the US did not take any action. It’s difficult to know where Kurds will be with the US. Everyday it’s a new policy, a new approach," Rashidi said.

"But we love the US, and hope to grow better relationship."

So far, Rashidi has received positive responses after Trump's remarks and says he is now called "Mr Kurd" by friends and family.