Iraqi government forces and Iranian-trained Iraqi paramilitaries are "preparing a major attack" on Kurdish forces in the area of Kirkuk, said the Kurdistan Regional Government on Wednesday.

Offensives are being prepared in the areas of Kirkuk and Mosul, it said.

Kurdish forces took control of Kirkuk in 2014 after fighting back advances by the Islamic State group.

The city of about one million is divided between Arab, Kurdish and Turkmen populations and took part in the 25 September independence referendum.

Although Kurds are a minority in Kirkuk, nationalists claim that it is the cultural capital of the Kurdish people.

It has been the primary point of contention in the referendum, which included Kirkuk within its remit despite it being officially outside the KRG region designated by the Iraqi constitution.

The Popular Mobilisation Units (PMUs), mostly Shia militias some of which are heavily backed by Iran, have repeatedly threatened to retake Kirkuk from the Kurdish forces.

The alleged move by the Iraqi forces is the latest development in a series of measures taken by the government in Baghdad to penalise the Kurdish region for the referendum.

Iraqi authorities announced Tuesday that they are looking to reopen a key oil pipeline to Turkey that would rival a competing Kurdish export route.

The Iraqi pipeline was cut off after the Islamic State group seized swathes of the country in 2014, halting a flow of oil to Turkey of up to 400,000 barrels a day.

The angry dispute over the referendum - also rejected by the United States - is the latest twist in the decades-long movement by Iraq's Kurds to break away from Baghdad.

Iraq is pushing Turkey and Iran - which both opposed the ballot over fears of fuelling demands from their own sizeable Kurdish communities - to close their border posts with Kurdistan and stop all trade with the region.

Washington warned the referendum could "increase instability" in the region and have an impact on the battle against IS, in which Kurdish fighters have been a key force. 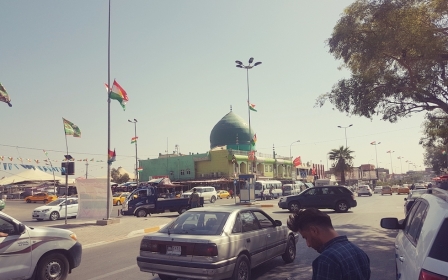