Kuwait's Fehaid al-Deehani, at his sixth Games, is one of nine competing as independent Olympic athlete (AFP)
By
MEE and agencies

Deehani, 49, a bronze medallist in the Sydney and London Olympics, was forced to take part in Brazil as part of the independent athlete team because the International Olympic Committee (IOC) suspended Kuwait for government interference in sport.

The army officer, at his sixth Games, is one of nine competing as an independent Olympic athlete.

The winner of Kuwait's only two previous Olympic medals is the first independent to win gold at an Olympics.

"In the final, God gave me the will to win. This is my day - it means everything [to Kuwait]," said Deehani, who had rejected an offer from the IOC to carry the neutral flag at last Friday's opening ceremony.

"I am a military man and I will only carry the Kuwait flag. I cannot carry the IOC flag," he told Kuwaiti media.

The six-time Olympian said he was sad he could not win for Kuwait.

"I won the gold medal, the biggest achievement of the Games, without raising my country's flag. It really hurts me."

Deehani defeated Innocenti in the duel for gold, nailing 26 orange targets out of 30 to Innocenti's 24. The bronze medal went to Scott, who defeated fellow Briton Tim Kneale with a perfect score of 30.

Rain and wind added a tricky dimension to the final.

"It was very difficult to shoot here," Innocenti said.

"It was very tough today, but I was able to come through," Deehani said, smiling. 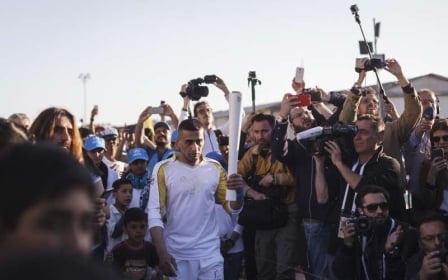