An audio recording allegedly leaked from the office of the Egyptian President, appears to show senior Egyptian officials discussing the deaths of 37 prisoners en route to Abu Zaabal prison.

The leak, the second in December, was released on the pro-Muslim Brotherhood satellite channel Al-Sharq and features General Abbas Kamel, director of the office of Egyptian President Abdel Fattah al-Sisi, and Mahmoud Shaheen, advisor for constitutional and legal affairs at the Ministry of Defence (MoD).

They can be heard discussing what has come to be known in opposition circles as the Abu Zabaal massacre, in which 37 prisoners were killed after police fired teargas into a poorly ventilated prison van in August 2013.

Kamel claims that the General had complained that colleagues of the accused officers had been denied the opportunity to testify to the court.

Shaheen can be heard to say that he would “speak to the judge so that he allows this”.

Commentators on social media pointed to this as proof that senior political figures had been interfering with the judiciary:

Latest #Sisi leaks indicate tampering with the judiciary, if this were a real country it would be worse than watergate #EgyptianWatergate

Alleged leak in a nutshell: Sisi's (then MOD) personal sec. intervenes to save a policeman simply because his father is an army general.

Another leak, released on Sunday evening by al-Sharq purports to feature Kamel asking the general prosecutor Hisham Barakat to lift a travel ban imposed against the son of a prominent writer and journalist.

Businessman Ahmed Haykal, son of al-Ahram editor Mohammed Hassanein Haykal, was banned from travel in 2011 after being accused of embezzlement.

In the four-minute recording, Kamal is heard to tell the general prosecutor: “Haykal’s people have spoken to me about his son – they said he doesn’t have a relationship with any [of the crimes he is accused of].”

Sisi had previously taken a stand against government interference in the judiciary, particularly with regards to the convictions of 3 Al-Jazeera journalists who will have spent 365 days in jail on Monday.

"We must respect judicial rulings and not criticise them even if others do not understand this”, he said.

It is as of yet unknown who is responsible for leaking the recordings. 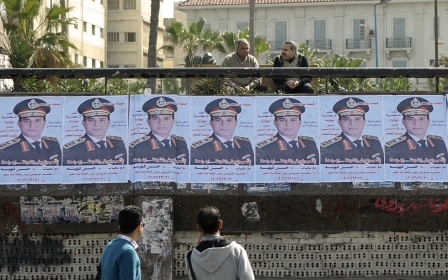