Syrian residents and members of the Syrian Civil Defence, also known as White Helmets, carry a victim following a reported air strike on a vegetable market in Maaret al-Numan in Syria's northern province of Idlib (AFP)
By
AFP

At least 11 civilians including two children were killed on Sunday in air strikes on a market in northwestern Syria, a monitor said.

The Syrian Observatory for Human Rights said the strikes on the market in Idlib province's Maarat al-Numan were probably carried out by government forces.

Much of Idlib province, including Maarat al-Numan, is controlled by Hayat Tahrir al-Sham (HTS), a group led by al-Qaeda's former Syria affiliate.

Idlib is one of four so-called "de-escalation" zones under a deal brokered by Russia, Turkey and Iran in May.

However, the HTS is not party to the agreement.

"At least 11 people were killed including two children," he said. "There are around 20 wounded and the toll of victims could rise."

The Observatory relies on a network of sources inside Syria, and says it determines whose planes carry out raids according to type, location, flight patterns and munitions used.

The Observatory said that on Friday and Saturday, at least 13 civilians died in suspected government air strikes around Khan Sheikhun, the site of a deadly April chemical attack.

Despite months of relative calm in Idlib, Syrian government and Russian forces have in recent weeks carried out air raids across the province, killing dozens of civilians, according to the Observatory.

Pro-Turkey Syrian rebels are also preparing for an operation to oust HTS militants from Idlib province.

Ankara has massed forces and tanks on its border with Syria but the assault has yet to begin in earnest, monitors and sources on the ground said. 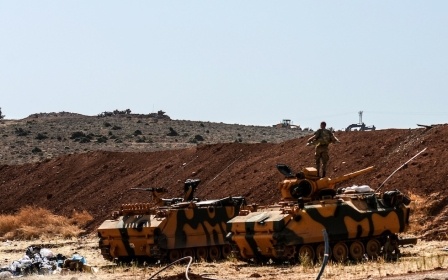