Yemenis in front of burning tires during an anti-Houthi protest in city of Taez on 24 March, 2015 (AA)
By
MEE and agencies

Shiite Houthi militiamen opened fire on Tuesday at demonstrators in the strategic Yemeni city of Taez, killing five protesters and wounding 80 others, a local official and medics said.

The militia attacked the demonstrators as they gathered for the third consecutive day to protest the militia's arrival in Taez, after the Houthis sent thousands of troops south from the capital Sanaa, which they control.

Amnesty International's Said Boumedouha said "human rights in Yemen are in free-fall as even peaceful protest becomes a life-threatening activity."

In Kirsh in Lahj province, two more civilians were killed in shootings by anti-Hadi forces, according to a security source.

Meanwhile, forces loyal to Yemen's president are scrambling to enlist thousands of troops to resist an expected attack on his southern stronghold by Houthi militiamen who have seized swathes of the country.

The recruitment drive comes as fears grow that the impoverished Arabian Peninsula country - a front line in the US battle against al-Qaeda - is sliding towards all-out civil war.

In the southern city of Aden, chaos erupted as would-be recruits jostled to sign up to defend the embattled leader against the advancing Houthi Shiite militia.

"We came to Aden to do our duty, at the request of President Abedrabbo Mansour Hadi," said Saqr al-Moghrabi.

Like some others seeking to enlist, he formerly served under the command of rogue general Abdel Hafedh al-Sakkaf, who sided with the Houthis before fleeing Aden.

"The new commander played tricks on us," added Iman al-Sharaabi, saying he hoped to secure employment and a salary fighting for Hadi, a southerner.

The president escaped the militia-held capital Sanaa in February and took refuge in Aden.

He has since launched a campaign to sign up 20,000 soldiers to reinforce his troops, targeting young Yemenis from the south.

Several thousand have already registered but they must still be trained and armed, said one Hadi aide who spoke on condition of anonymity.

The Houthi militia has made sweeping gains since pushing south from its northern bastion and overrunning the capital in September.

Houthis entered the central city of Taez on Sunday, taking over its airport and other facilities.

Taez, just 180 kilometres (110 miles) north of Aden on the road to Sanaa, is seen as a strategic entry point to Hadi's refuge.

UN Secretary General Ban Ki-moon's special adviser on Yemen has voiced fears that the rival forces will remain deadlocked, and warned that the country is sliding towards "civil war".

"It would be an illusion to think that the Houthis could mount an offensive and succeed in taking control of the entire country," Jamal Benomar told an emergency meeting of the UN Security Council on Sunday.

"It would be equally false to think that President Hadi could assemble sufficient forces to liberate the country from the Houthis," he added.

"Any side that would want to push the country in either direction would be inviting a protracted conflict in the vein of an Iraq-Libya-Syria-combined scenario."

On Tuesday Hadi called for the UN to go beyond simply backing him as the legitimate ruler and painted a dark picture of the crisis, raising concerns that al-Qaeda will "seize the current instability to spark further chaos".

Hadi also referred, in a letter to the Security Council, to an unspecified "missile capability looted from the legitimate authority", and asked the body to take control of the missiles.

The president called for the council to pass a binding resolution asking countries to provide immediate support "by all means and measures to protect Yemen and deter the Houthi aggression expected to occur at any hour from now" in several strategic cities, including Aden.

Longtime strongman former president Ali Abdullah Saleh, who was forced from power in 2012 after a year-long popular uprising, has been accused of working with the Houthis to restore his influence, and the Shiite militiamen have the support of Saleh loyalists in the army.

On Hadi's side are the Popular Resistance Committees, a locally recruited militia which appears highly motivated and well-prepared for battle.

On a road in the north of Aden, tribesmen have taken up positions to resist any Houthi attack.

"We have tried to avoid war, just as the president of the country tried several times to avoid division. But the Houthis have not heard this message," said tribal chief Abdel Latif Essayed. 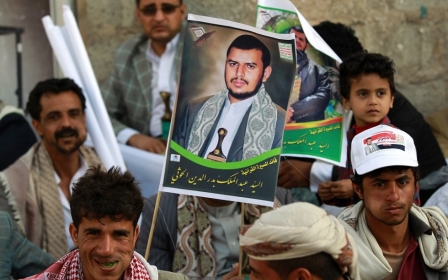