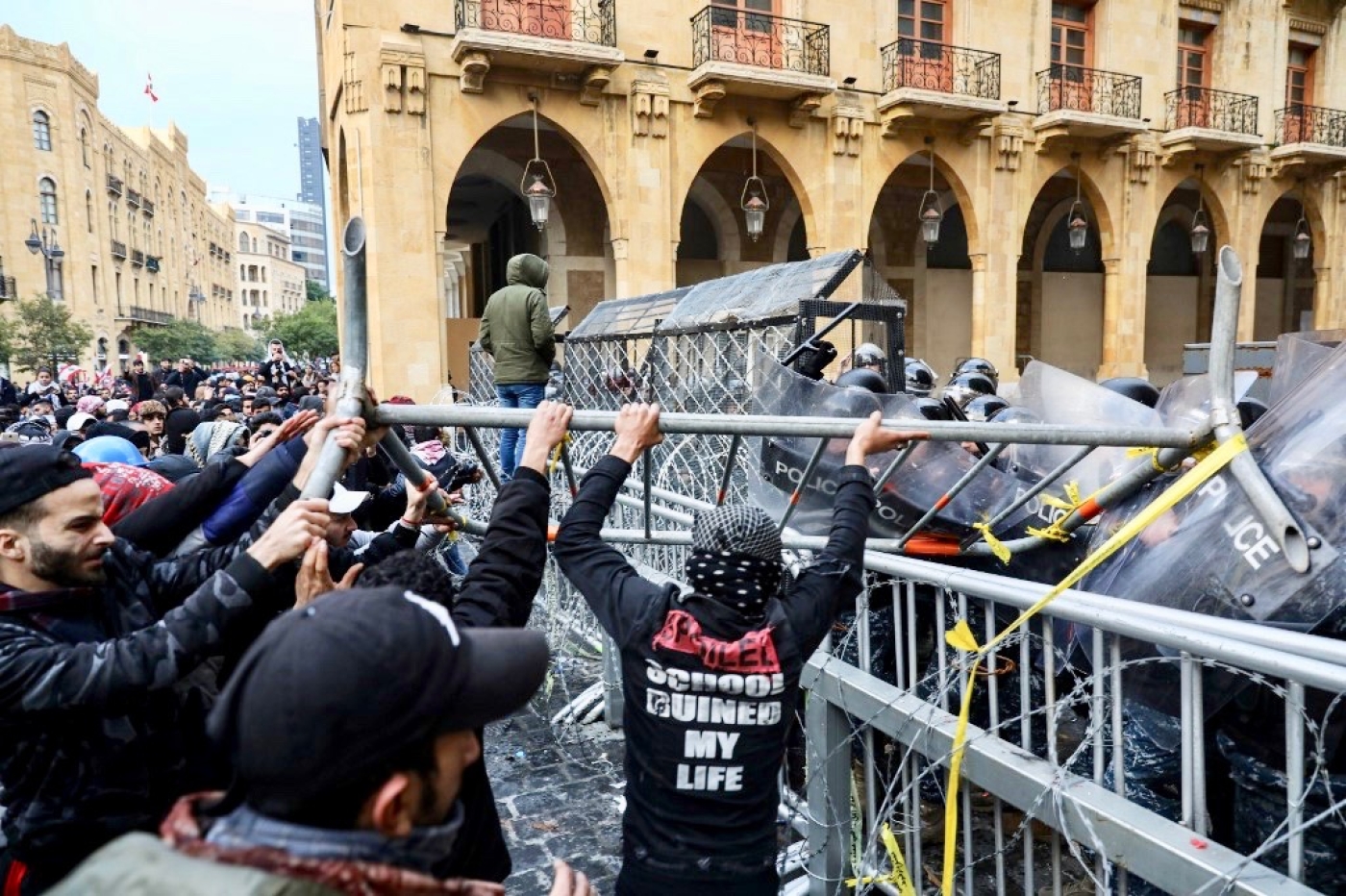 Clashes between police and protesters in Lebanon angered by delays in forming a government injured nearly 400 people on both sides on Saturday as the anti-establishment demonstrations entered the fourth month.

More street rallies were expected later on Sunday as part of the wave of popular protests that have demanded the wholesale ouster of the Lebanese political class, which the activists condemn as inept and corrupt.

At least 377 people were injured - both protesters and members of the security forces - according to a toll compiled by AFP from figures provided by the Red Cross and Civil Defence.

On Saturday evening, fire tore through protest tents in an iconic square in central Beirut. It was not immediately clear what caused the blaze.

The protest movement rocking Lebanon since 17 October revived this week as a deepening economic crisis increases pressure to form a new government. The World Bank has warned that the poverty rate in Lebanon may rise from a third to half of the population if the crisis is not solved quickly. The Lebanese pound has lost almost half its value, while dollar shortages have driven up prices and confidence in the banking system has collapsed.

Police beatings and arrests in recent days have alarmed human rights groups and sparked fears among activists of a move to crush the dissent, Reuters said.

President Michel Aoun ordered the country's army and security commanders to restore calm. Saad al-Hariri, who resigned as premier in October, said the clashes threatened civil peace. "It is an insane, suspicious and rejected scene," he tweeted.

Earlier, marches had intended to converge on the city centre from across Beirut.

But near parliament, young men chanting "revolution" hurled stones, steel barriers and flower pots at riot police, as protesters tried to enter the heavily barricaded part of central Beirut which includes the government.

Hundreds of people also marched and chanted against the political class in other parts of the capital. A large banner at one of the rallies read: "If the people go hungry, they will eat their rulers." Security forces behind the barricades responded with water cannons and tear gas to disperse the crowds.

"A direct and violent confrontation is taking place with anti-riot police at one of the entrances to parliament," the Internal Security Forces said on Twitter.

"We ask peaceful protesters to keep away from the site of the rioting for their safety."

They published photos of several injured policemen and a video showing pillars stripped of their tiles, reportedly to be thrown at security forces.

A 23-year-old woman named Maya said she was protesting because politicians seemed to be ignoring demands for an overhaul of the old political class.

"I'm here because after more than 90 days in the streets, they're still squabbling over their shares in government... It's as if they didn't see our movement," she told AFP.

"Popular anger is the solution," she said. Forming a cabinet is an often convoluted process in Lebanon, where a complex system seeks to maintain balance between the country's many political parties and religious confessions.

Still, protesters say they want to scrap the old system and demand a new government of impartial technocrats to address the mounting economic woes.

This week, public anger has been directed at banks, with branches in the capital's Hamra district vandalised following widely unpopular limits on withdrawals and transfers.

Dozens were detained for several nights after clashes on Tuesday and Wednesday, before being released.

Human rights groups denounced the arrests and what they described as unacceptable violence against largely peaceful protesters.

The last government stepped down under pressure from the street on 29 October but has remained in a caretaker capacity until a new cabinet is formed.

Still, no progress appears to have been made towards finalising the cabinet, which protesters demand be comprised of independent experts and exclude all established political parties.

Political factions that agreed on 19 December to appoint former education minister and professor Hassan Diab as the new premier are now disagreeing over proposed ministers.