Following a split in Libya's General National Congress over Sunday's election, the GNC's chief has confirmed Ahmed Miitig as the new prime minister 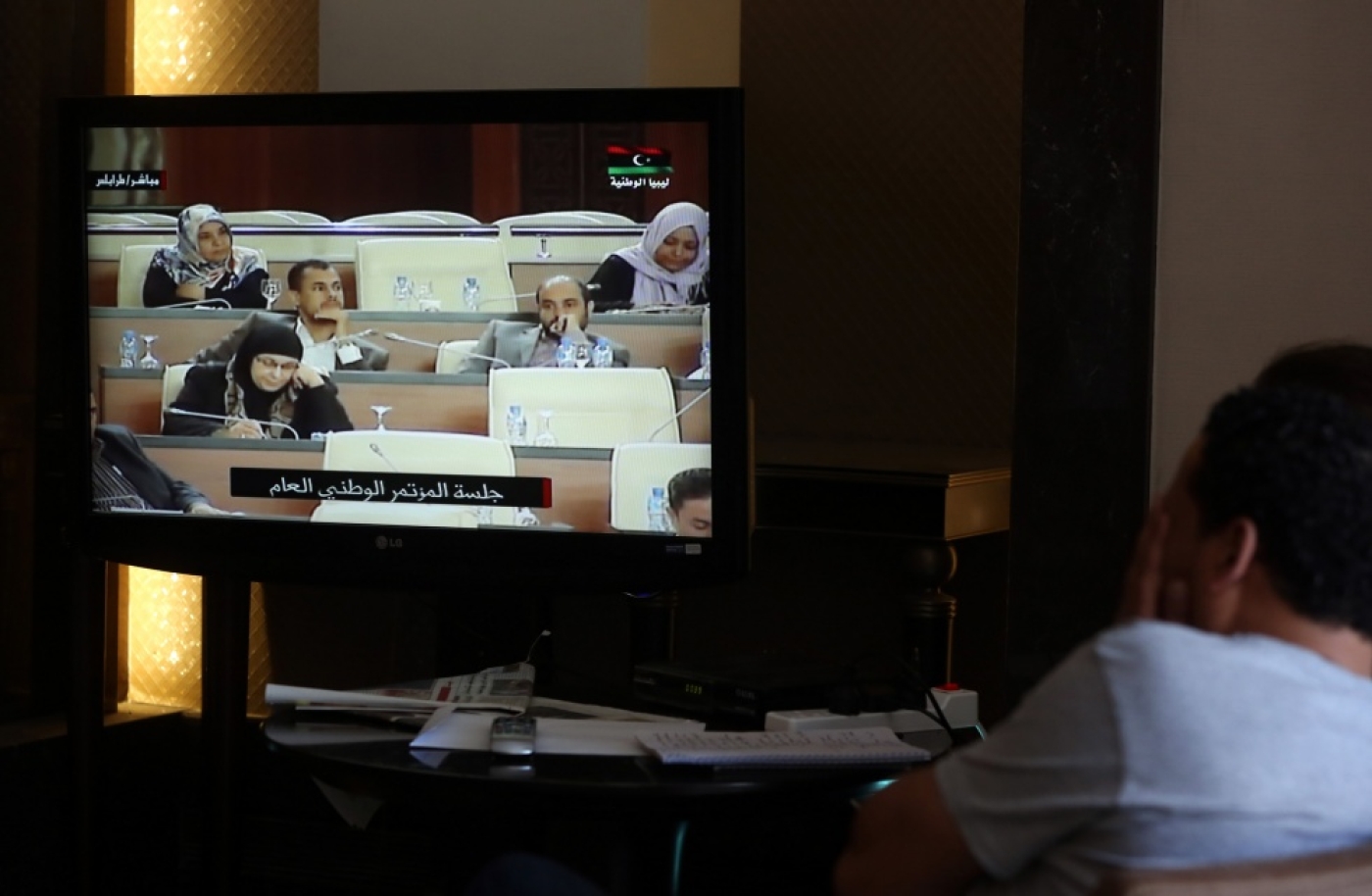 A view from the press room as reporters in Tripoli watch a live feed of Libyan members of parliament deciding between two candidates for the post of prime minister at the parliament the capital on 4 May. (AFP)
By
MEE and agencies

The speaker of Libya's General National Congress confirmed Ahmed Miitig as the country's prime minister Monday, after approving his appointment following a chaotic session of the interim parliament.

"Ahmed Omar Miitig was appointed head of the transitional government, and asked to form his cabinet and present it to the GNC for a confidence vote within 15 days," said the text of a decision signed by speaker Nuri Abu Sahmein.

The appointment makes the 42-year-old businessman Libya's youngest and fifth premier since long-time autocrat Muammar Gaddafi was toppled and killed in a 2011 uprising.

Sahmein's statement followed an earlier chaotic session on Sunday of the General National Congress (GNC), broadcast on state television, after which it was unclear whether Miitig's election was legal.

At first, Awami said Miitig defeated university professor Omar al-Hassi by 73-43 votes, but mustered only 113 of the 120 votes required for a vote of confidence.

But the second vice president, Salah al-Makhzoum, who ranks lower than Awami, later announced that the relatively unknown businessman had clinched 121 votes in the 185-seat interim parliament, apparently after a recount.

Since Gaddafi's toppling, successive governments in the oil-rich North African country have struggled to impose order as heavily armed former rebel brigades have carved out their own fiefdoms and refused to join the security forces.

The job of prime minister has proven challenging and dangerous. Ali Zeidan, who was voted out by parliament for failing to prevent a rebel oil shipment in March, was kidnapped by gunmen last year and held for several hours before being released.

Last month, Zeidan's defence minister Abdullah al-Thani was appointed to replace him, but stepped down after just five days, saying he and his family had come under attack.

Miitig - who has vowed to rebuild state institutions, namely the army and police - would normally have two weeks to form a government.

Prior to the confirmation from the GNC's speaker, liberal lawmaker Sherif al-Wafi said he and other deputies "will take the necessary legal measures" to stop Miitig from heading the government.

It was the second time in a week that the GNC met to decide between the two candidates who were initially among a group of seven hopefuls.

After an initial meeting on 27 April, parliament gathered again on Tuesday, when Miitig won 67 votes in a first round with Hassi in second place with 34 votes.

A second round of voting on Tuesday was interrupted by gunmen who stormed into parliament for reasons that are still unclear, shooting and forcing deputies to evacuate the premises.

The GNC was elected in July 2012 for an 18-month term, but in February, it extended its mandate to December, sparking widespread protests.

Parliament's Islamist supporters were in favour of the extension while the liberal National Forces Alliance slammed the move as undemocratic.

The political turmoil comes as militants have carried out near-daily attacks on security forces, particularly in the restive eastern city of Benghazi, cradle of the uprising that ended Gaddafi's four-decade rule.

Some of the most formidable rebels hail from Misrata, Libya's third largest city and Miitig's hometown, which saw some of the worst fighting of the NATO-backed uprising.