As many as one million people, mostly from sub-Saharan Africa, are currently in Libya hoping to make it to Europe 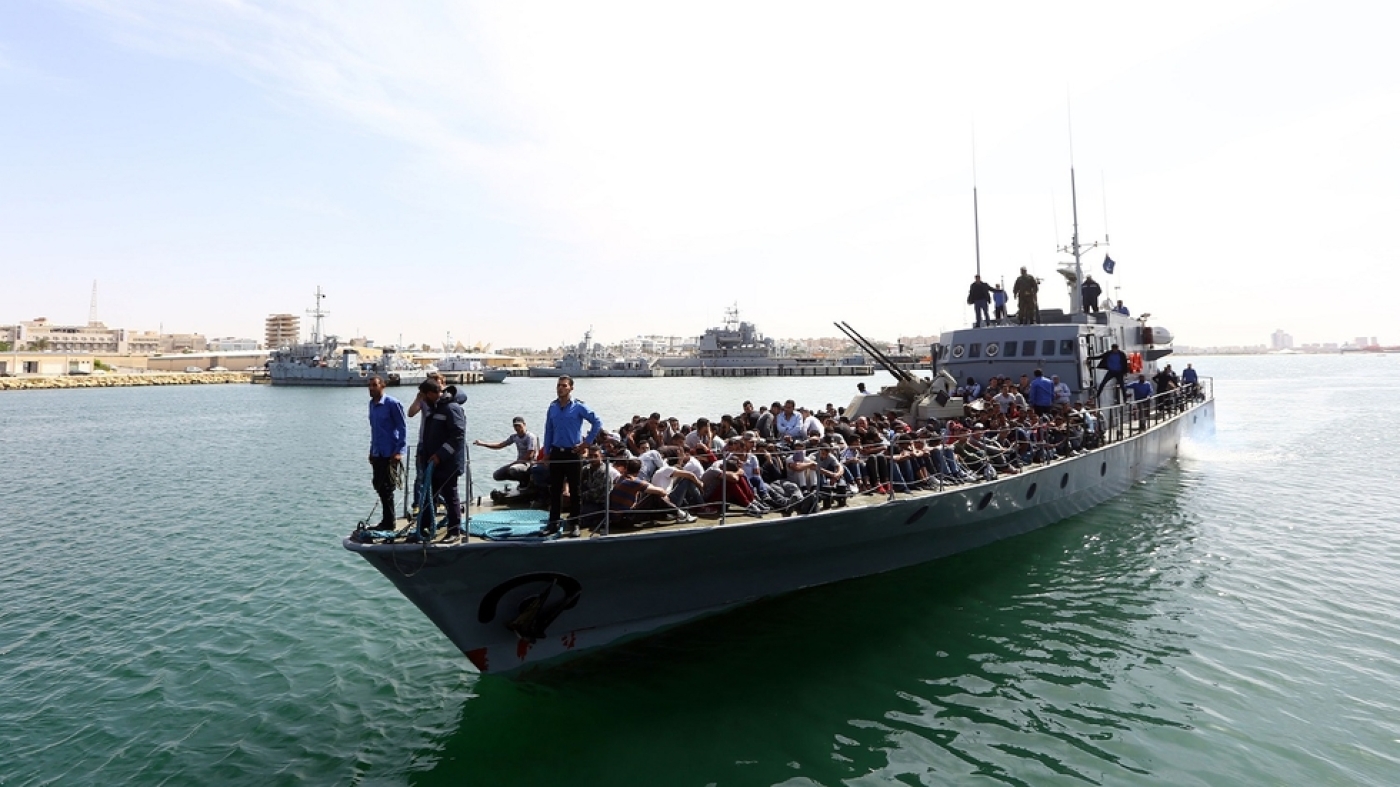 Migrants rescued by the Libyan coastguard arrive at a naval base in Tripoli, 10 May (AFP)
By
MEE and agencies

Libya's coastguard on Wednesday intercepted a wooden boat packed with almost 500 migrants following a confrontation with a German rescue ship and after coming under fire from traffickers, the North African country’s navy said.

The migrants, who were bound for Italy, were picked up off the western city of Sabratha, said navy spokesman Ayoub Qassem.

The German non-governmental organisation "Sea-Watch tried to disrupt the coastguard operation... inside Libyan waters and wanted to take the migrants, on the pretext that Libya wasn't safe," Qassem told AFP.

Sea-Watch posted a video on Twitter of what it said was a Libyan coastguard vessel narrowly cutting across the bow of its ship.

Qassem also said the coastguard had come under fire from traffickers, without reporting any casualties.

The 493 migrants included 277 from Morocco and many from Bangladesh, said Qassem; 20 women and a child were also aboard the boat. All were taken to a naval base in Tripoli.

There were also migrants from Syria, Tunisia, Egypt, Sudan, Pakistan, Chad, Mali and Nigeria, he added.

The confrontation follows reports that 250 migrants aboard flimsy vessels had drowned after their boats sunk at the weekend. The Libyan coastguard picked up seven migrants who said they had been on an overloaded dinghy packed with 170 people, which sank on Sunday.

Some 30 women and nine children were among the missing, a Libyan coastguard said. Around 50 survivors of a second shipwreck were rescued by the Italian coastguard, with 80 others reported missing by the UN Refugee Agency, the Independent reported.

More than 7,000 people have been rescued at sea since last Thursday.

According to international organisations, between 800,000 and one million people, mostly from sub-Saharan Africa, are currently in Libya hoping to make the perilous Mediterranean crossing to Europe.

Between 7,000 and 8,000 migrants are being held in Libyan detention centres after entering the country illegally, an immigration official said on Tuesday.

The North African country has long been a stepping stone for migrants seeking a better life in Europe. Smugglers have stepped up their lucrative business in the chaos which has engulfed Libya since its 2011 uprising and civil war.