Libya’s coastguard has no boats to tackle crisis. Refugees are locked in small houses and traffickers' business is out of control Migrants rescued by Libyan coastguard after their boat sank on 28 August, 2015 (AFP)
By
Francesca Mannocchi

GARABULLI, Libya - The sun is high in the sky and Isaa, the coastguard responsible in Garabulli, is sitting on a wooden bench, alone, holding a transmitter receiver and looking at the sea.

"Last year we used to have a boat to go out on the sea and try to stop the departures of many boats [we thought dangerous],” he said. “But nowadays we have just this piece of junk left. I am forced to use my family fishing boat!”

Still Isaa does not give up and continues to endure shrinking resources and threats. A while ago, a couple of traffickers asked him to ignore their departures. When he refused, they showed him a knife, said Issa, who is in his 40s. With trafficking on the rise, he says he is not sure if something like this will happen again.

His ability to react to situations has also been seriously curtailed. A few ago Isaa intercepted a boat. He called his superiors in Tripoli for help but the authorities decided not to send their only tugboat, he said.

"Look at that point,” Isaa said while indicating to a group of trees near the shore. “That's the best point to put the rafts in the sea. These coasts are surrounded by dense forests and the smugglers can gather the refugees there to prepare the departures."

With so few resources at his disposal, Isaa has instead taken to documenting the scenes around him. His phone is a terrible gallery of shipwrecks and atrocities he has witnessed over the last few years. In one of the latest videos, Issa is filmed during a rescue operation as he tries to bind the body of a dead woman with a rope, to carry her corpse back to shore.

"Everything has changed since [former leader Muammar] Gaddafi's era,” Isaa said. “Gaddafi agreed with the fact that refugees had to reach Italy: they [the refugees] helped him to pressure European governments.”

“Nowadays the smugglers only care about the departures. They just want migrants to pay the price of the ticket. They don't care if they die 20 miles [32 kilometres] after. The situation is completely out of control: now there are even some militias organising refugees' departures to subsidise their wars..."

Residents in this coastal city, some 50 kilometres east from the capital, all repeat the same thing: everyone - on every level - is now involved in the human trafficking business.

Four years after the revolution that ousted Gaddafi, many Libyans have found themselves living in the midst of a civil war that has completely divided the country.

On one side, there is the elected government of Abdullah al-Thinni, based in Tobruk to the east and supported by general Khalifa Haftar who now heads up the Libyan army.

On the other side, there is the self-declared government of Khalifa al-Gwheil, which is based in Tripoli, and believes the Tobruk government to be illegitimate. To complicate things further there are some 149 tribes and 230 armed militias holding sway over large parts of Libya, not to mention a growing Islamic State group presence in Derna, Sirte and Benghazi.

Repeated attempts by the UN to reconcile the two main camps have thus far come to little. In this complicated land of overlapping and conflicting powers and failing security, human trafficking has become prolific.

A link in the human trafficking chain

Ibrahim, who spoke to MEE on the condition that his real name not be used, is one of the many who have joined the trade in Garabulli and now works as one of the links in the complex chain of the booming human trafficking business.

"Here it's where we store our goods,” he said in reference to the migrants and refugees – in Garabulli - what is he pointing at? “We group them in small houses close to the sea. We give them a ‘password’ they have to say when they arrive and then, when it gets dark, we set the rafts free and let them go."

Ibrahim says that like many other people smugglers, he gives the migrants and the refugees a compass and tries to direct them straight to the Italian Island of Lampedusa, some 220 kilometres north of Libya.

The refugees and migrants don't drive the boats, Ibrahim explained.

"Not one of us would ever travel in a boat like those,” he said.

More than 300,000 refugees and migrants have risked their lives crossing the Mediterranean to Europe so far this year, up from 219,000 for the whole of last year, the UN said on Friday.

Nearly 200,000 people had landed in Greece since January, while another 110,000 had made it to Italy. Some 2,500 more have died while making the perilous journey. The figures don’t include 76 people who were dead off the Libyan coast on Friday in only the latest tragedy to hit the region.

According to Ibrahim, the smuggling operation has many different parts. First, someone has to find a place to keep the refugees and migrants while they wait. Then someone has to feed and control them. Soon thereafter someone will have to provide the boats and the engine, which are usually purchased from fishermen, before someone finally collects the money and makes sure everyone has paid the fare. The price paid depends on the natinality of the refugees and migrants. Those from sub-Saharan Africa tend to pay around $500, while those from Syria between $750 to $1,000.

“It's a sort of mafia: everyone is involved. Even the brigades who should control the area,” Ibrahim said.

Colonel Aiub Qussim, the Libyan Navy spokesperson, told MEE at the Tripoli's naval base headquarters that the situation is extremely difficult and the authorities have very few resources with which to tackle the problem.

"NATO bombed our fleet in 2011 so now we have no means,” he said while showing off the remains of tugboats bombed four years ago.

“European governments helped us to free ourselves from our regime but they have never supported the construction of a new state. And these are the results: a civil war and 1,800 kilometres of coastline without any mean to control them."

"In 2013, the European Union promised us 26 million euro ($30m) a year to ensure the means for the Coast Guard but with the civil war, the situation has deteriorated and we have never seen the money,” Qussim added.

Instead, he explained, the coast guard has come to rely on local fishermen who go out to sea and try and help in a personal capacity.

The EU has held a string of crisis meetings about the influx of refugees and migrants but has thus far failed to agree on a joint solution. Controversial proposals, announced earlier in the year, would have seen the EU mount a military campaign against the smugglers in Libya but it seems the array of complications with the plan have seen it sidelined.

The naval base, where the crippled Libyan navy try to stem the tide, is indicative of Libya’s inability to go it alone. The rolling power cuts leave it in regular darkness, while its small staff of 10 sit powerless in front of the sea.

Mohammed is one of the sailors trying to rescue those who are not lucky enough to make it to European waters. He allowed MEE to accompany him and his crew as they set out one evening - trying to find survivors in the dead of night with no lights, no night vision and not even a radar on board.

"We have no means, so we can only trust on our senses," he said.

Mohammed has long learnt to improvise and once out to sea he sits on the edge of the boat and tries to listen out for boats and people.

"The smugglers usually send the rafts at night, one after the other. The problem is that when we intercept a raft we don't have any place where to put the refugees,” he said.

“One night, not long ago, we intercepted a boat and just behind it another. There have been perhaps 100, 120 people on each vessel. But I only had the means to tow one boat and I preferred to leave the first one because it looked more solid.”

“Instead I picked the second, which was in danger of sinking and deflating, but I saw women and children frightened and in despair. The worst thing about it all is that we are forced to go out armed because we risk being threatened by traffickers.”

Mohammed said that him and his crew have to contend with all kinds of criminal activity - from fuel and tobacco smugglers to human traffickers.

"I was offered a new better paying job,” said Mohammed. “Here it’s not only our resources that are becoming scarce, it’s also the money and our fear is that soon they will not pay even our salaries. But I do not feel like leaving, why [would I when] saving lives is my job." 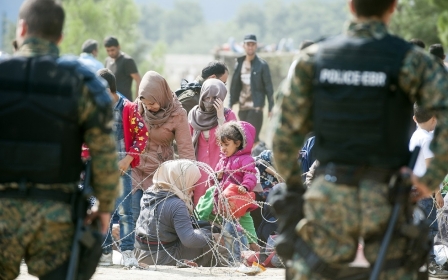 Migration
Fresh tragedy in Med, as at least 40 migrants die at sea