The interim GNC, officially replaced by a parliament elected in June, named Hassi on 25 August to form a "salvation government" in opposition to the body now sitting in the eastern city of Tobruk.

Hassi's lineup of 19 personalities little-known to Libya's wider public must be approved by the GNC in the capital Tripoli at a date to be decided, LANA said.

Hassi, a political science lecturer at the University of Benghazi in eastern Libya, was the losing candidate in a GNC election in June for a new premier.

Ahmed Miitig was elected instead, but the Supreme Court ruled this unconstitutional and Abdullah al-Thani remained interim premier.

Thani now heads a toothless outgoing government that admitted on Monday from its safe refuge in Tobruk that control of Tripoli has in effect been lost to militias.

Libya had been sliding steadily into chaos since Muammar Gaddafi was overthrown and killed in October 2011.

The government in Tobruk announced last week it had tendered its resignation to parliament, which on Monday voted to ask Thani to form a streamlined new cabinet.

The parallel administration in Tripoli was born after militiamen, characterised as Islamist but self-perceived as revolutionaries, on 22 August seized the capital's international airport from rivals allied with rogue general Khalifa Haftar.

After their victory, the GNC - whose mandate had officially expired with the election of a new government - tasked Hassi with forming a parallel administration.

The newly elected parliament in Tobruk has steadily lost ground to the forces of Libya Dawn in recent weeks and lost control of the airport after more than five weeks of intense battles.

Libya Dawn rejects the legitimacy of the elected parliament because it allegedly supported air raids last month - which US officials said were carried out by the UAE - against its fighters in the airport area.

The central bank of the troubled but oil-rich North African nation, meanwhile, appealed on Tuesday for it to be kept out of the political chaos, warning in a statement that the international community could otherwise "freeze the assets of the Libyan government". 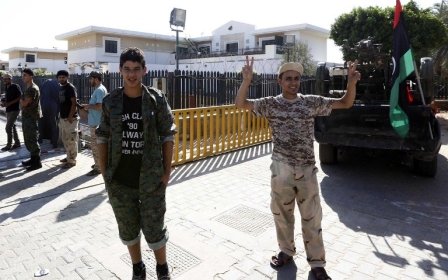