As the Army loyal to Tobruk claims to be closing in from the west, Tripoli-based security forces have been cracking down on opposition supporters TRIPOLI - A burnt-out lorry smouldered on the edge of an empty roundabout in the central Tripoli district of Fashloom where masked men in military uniforms patrol the burned tarmac with Kalashnikovs and vehicles mounted with Soviet-era anti-aircraft weapons.

A few local people emerged from shuttered homes to assess the damage wreaked by three days of heavy fighting that broke out last Friday and culminated in a relentless eight-hour firefight that could be heard across the capital.

Fashloom is a humble part of town which was made famous in 2011 when it became one of the first districts to come out in support of the revolution that was to oust leader Muammar Gaddafi from power.

Despite these revolutionary credentials, since the Libya Dawn movement took control of the capital in August last year and set up a rival government, the area has been viewed by the new powers as a hotspot of dissent. During a week of heavy-handed crackdowns on districts still loyal to the Tobruk-based parliament in the east, Fashloom paid a heavy price and hosted some of the fiercest fighting in Tripoli. Six people were killed, and shops, buildings and cars badly damaged.

“The cause of all the problems in Libya nowadays are the many sleeper cells in Tripoli loyal to the so-called Operation Dignity,” said Tripoli-based Interior Minister Mohamed Shaiter in reference to a military operation launched in Benghazi by General Khalifa Haftar, who is now part of the Libyan Army that is loyal to Tobruk.

“In the Fashloom district, murderers and criminals who support Haftar and Operation Dignity closed roads and started shooting workers and simple people, including revolutionaries,” he added.

Now, burnt-out vehicles are all that remains of makeshift defences put up by Fashloom residents, who claimed they were targeted for their political allegiances and were defending their neighbourhood against attack.

The tensions in the area had been building up for weeks, as Tobruk and its allies tried to make gains in the capital ahead of fresh UN-brokered peace talks. According to sources on the ground, the drive was intended to help boost Tobruk’s bargaining power at the talks, aimed at ending the rift between the two parliaments and stemming violence in the country.

Cautious about talking to the press, local people nonetheless spoke in hushed voices about a dead child, a blinded young man lying in intensive care, his body peppered with shrapnel from an RPG.

While it is difficult to validate these claims, almost everyone spoke of the brutality of the last night of clashes when as part of the wider crackdown armed men in masks terrorised several residential areas. The assault was apparently sanctioned by the Tripoli-based government and was intended for anyone suspected of supporting the Tobruk parliament known as the House of Representatives (HoR).

One man said security personnel jumped over outer walls and entered homes by force, making multiple arrests and seizing vehicles believed to belong to HoR supporters. “People were terrified,” he told Middle East Eye. “There were about 15 of them on my street, taking people by force.”

Interior Minister Shaiter insisted the attack on the Fashloom district was “a final solution” to the crisis. According to Shaiter, Tripoli’s security forces - an alliance of locally-based military groups – were forced to undertake drastic measures after weeks of sporadic clashes during which he said Libya Dawn had pursued local dialogue and urged residents to surrender their weapons.

The offensive on Fashloom came after several nights of violence in the town of Tajoura on Tripoli’s outskirts, where pro-HoR forces launched a push towards the capital from the east. This too was crushed by Libya Dawn forces, during several nights of fighting in which 22 people were reportedly killed. The commander of the Tajoura uprising - Abdullah Sassi – was also captured. Images of Sassi, with his nose and head bloodied and with victorious slogans written across his face with a marker pen, were widely circulated on social media sites.

“We will strongly fight back against terrorism and Haftar’s followers who try to undermine security in Tripoli,” Shaiter said, describing those who had been killed and arrested, in both Fashloom and Tajoura, as “murderers”.

Fashloom is one of several areas in the capital perceived as loyal to the HoR and the Libyan Army. Since the Libya Dawn movement arrived in Tripoli, these allegiances were liberally voiced in graffiti that daubs many of the area’s walls. After the clashes, however, much of this graffiti was crossed through with red paint - a reminder to residents of who was now in charge, ideologically as well as physically.

“The wrong words can get you killed in Tripoli, and no one will care. Your family may care, but others are afraid,” one Libyan activist tweeted after the fighting had subsided, sentiments echoed by local residents, who were cautious about speaking to the press.

“Fear is everywhere in Libya.”

Shaiter, however, insisted that freedom of speech and expression in Tripoli are not an issue, as long as the opposition remained non-violent. “There is no problem if people want to support another side and have a peaceful demonstration here in Tripoli,” he said. “But not freedom of speech with rifles, shooting, road closures and burning fires.”

As evidence of the fighting began to be cleared away and the heavy machinery moved in to dispel the debris of upturned and burnt-out cars, migrant workers in orange suits could be seen sweeping away bullet casings and spent fireworks which were let off at the start of the weekend to show support for the HoR, and then, at its close, ignited in victory by the Tripoli-based forces once they had quashed the dissenting neighbourhood.

But while the latest round of fighting in the capital might be over, the divisions remain and the resurgence of fighting remains foremost in peoples’ minds.

At the sound of sporadic gunfire, the roadsweepers jump and duck down behind the heat-whitened shell of a car. Military Toyotas spray-painted with Tripoli-government aligned brigade names and trailing Libyan flags, sped through the streets.

At the far end of the Fashloom district, security forces in civilian attire proudly posed for photographs as they stood guard in front of building. “We’re with Kara,” one shouted, alluding to Abdulrauf Kara - who heads a powerful anti-crime unit in east Tripoli. “There’s no militia here now.” 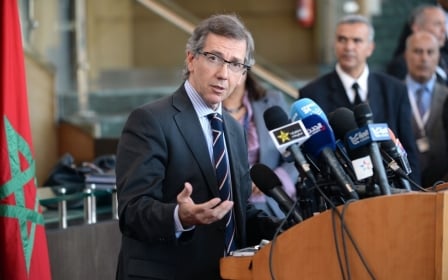