London 'turning into Riyadh' as Mohammed bin Salman flies in 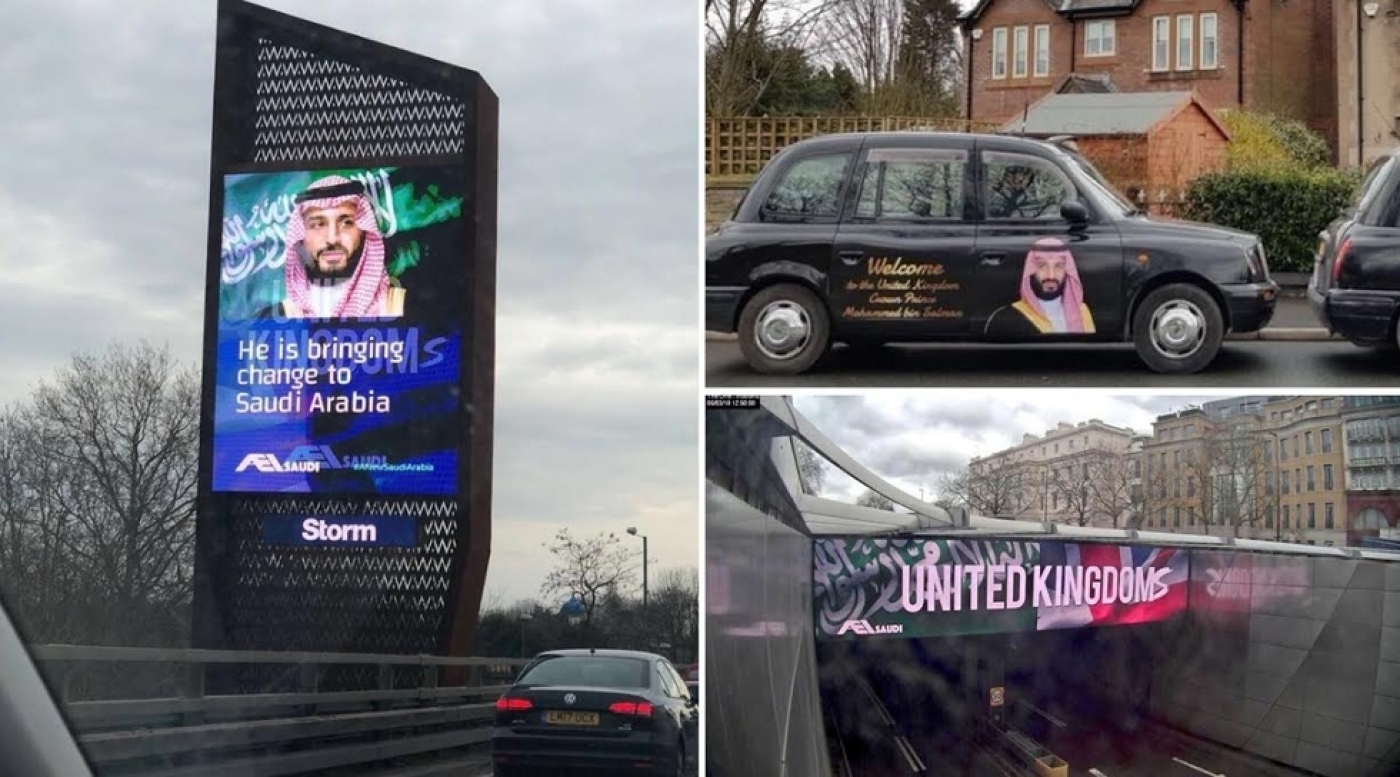 Huge adverts go up across the British capital bearing the smiling face of a Gulf autocrat. The hashtags #WelcomeSaudiCrownPrince and #SaudiPrinceNotWelcome duke it out on Twitter and in billboards, and a war of words is fought by supporters and staunch critics of Mohammed bin Salman.

Welcome to London, 6 March, 2018, the day before the Saudi crown prince touches down to meet the great and the good of Great Britain.

Bin Salman will be in the UK for talks with Prime Minister Theresa May that will include topics such as extremism, defence co-operation and social reforms, Downing Street said last week.

But his presence and accompanying PR campaign has already created huge arguments on social media and preparations for demonstrations.

The adverts in support of the "reform" and "change" the crown prince is said to be bringing to Saudi Arabia have popped up all over London, hosted by Saudi-based company AEI Saudi. Taxi cabs also bear the image of the crown prince.

Feels like arriving in #Riyadh - when entering London from the M4 & M40 one is greeted by the “beloved leader” #MbS - @AEISaudi & the #Saudi lobby try to turn around the kingdom’s image in a not so subtle way @alekhbariyatv pic.twitter.com/Gb8rwuYiUK

Hashtags #SaudiPrinceNotWelcome and #WelcomeSaudiCrownPrince kicked off on Twitter as users tweeted both in anger and support of the visit.

Not happy that Downing Street is entertaining a human rights abuser who is waging war and creating famine in Yemen. Mohammed Bin Salman, you are not welcome! #StopTheWarOnYemen #saudiprincenotwelcome #SaudiCrownPrinceVisitUK

Saudi crown prince promises a more moderate Islam but his bombing and starving of Yemeni civilians shows his version of governance still has plenty of room for cruelty and violence. https://t.co/NxxBlESOG9

Some users pointed out discrepancies in the reaction to Donald Trump’s recently cancelled visit and bin Salman’s.

Alarming how many people rightfully get angry about Donald Trump visiting us but so little is said about the Saudi Prince being welcomed by May. She spoke about combatting extremism but funds and arms extremists. Is this what they call taking back control? #SaudiPrinceNotWelcome

Bin Salman has come under fire for his involvement in the ongoing conflict in Yemen. The Saudi royal has been the chief architect of the Saudi-led bombardment of Yemen, which rights groups have claimed has been made possible by the sale of more than $6.4bn of UK-made weapons to Saudi forces.

On Wednesday the person most responsible for the bombing of #Yemen arrives in the #UK.@theresa_may should not be welcoming war criminals! #SaudiPrinceNotWelcome!

Others shared support for the royal, who has pushed a rhetoric of reform.

”The UK government denies evidence from Human Rights Watch, Amnesty and the UN that the Saudi-led coalition may be committing war crimes in Yemen.”

May has defended the close relationship between the two kingdoms despite the accusations against Saudi over Yemen, insisting that having close ties with the Saudi has “saved British lives”.

She said last week: “The partnership between the UK and Saudi Arabia already helps make both of our countries safer through intelligence-sharing which has saved British lives, and more prosperous, with thousands of jobs created in the UK and substantial opportunities for British companies in Saudi Arabia.

"The visit of the crown prince will establish the platform for that relationship to become even stronger."

The announcement of the visit was followed almost immediately by calls for protests from activists. The Stop the War Coalition announced it would picket the talks, and appealed to supporters to make clear the "chief architect of Saudi Arabia's brutal war in Yemen" was not welcome in London.

The visit will be part of the crown prince’s maiden foreign tour as heir to the throne, which began on Sunday with a visit to Egypt.

#welcomesaudicrownprince
SAUDI MUST STOP INTERFERING IN THE MIDDLE EAST - LET US NOT BE FOOLED BY BIN SALMAN'S PR STUNT #Saudi #WarCrimes pic.twitter.com/ieRsiEiAnR

The trips are aimed partly at courting investors and come after a tumultuous period that saw a major military shake-up and a royal purge, part of the prince's sweeping power play that has shaken business confidence.

The trip comes as Prince Mohammed, a self-styled moderniser who has sought to project a liberal image of Saudi Arabia to investors, consolidates power to a level unseen by previous rulers.

A dramatic shake-up announced last week saw military top brass, including the chief of staff and heads of the ground forces and air defence, replaced.

The reshuffle came after the prince sidelined political rivals to become heir to the throne last June and orchestrated a royal anti-corruption purge in November that saw princes, ministers and tycoons locked up in Riyadh's luxury Ritz-Carlton hotel for nearly three months.