'Our Role Model': Mahmoud Abbas quotes to be taught in Palestinian schools

Teachers and parents have met the booklet with condemnation, saying that it does not introduce any 'knowledge' to their children 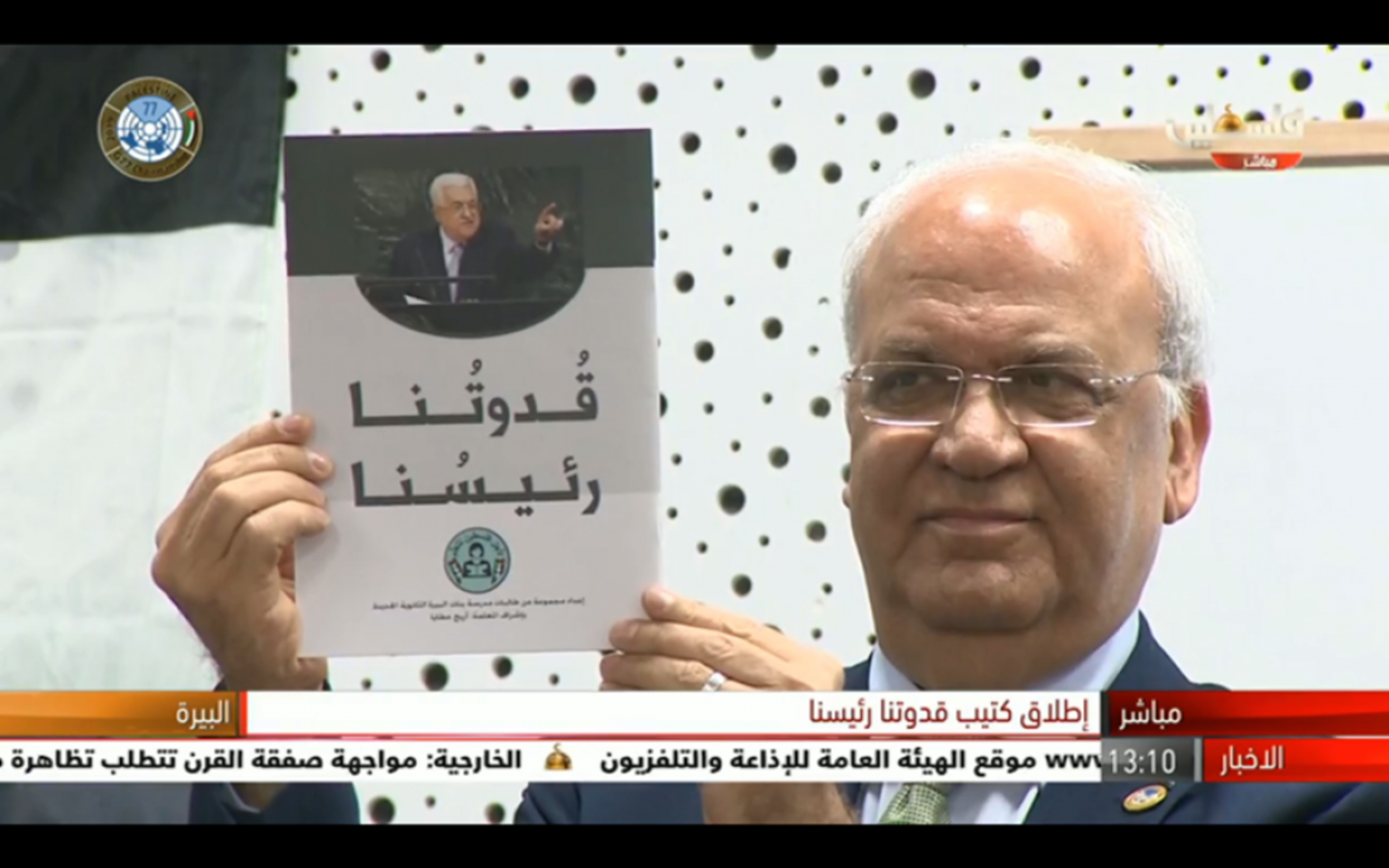 Saed Erekat, the secretary-general of the Palestine Liberation Organisation, raises a copy of "Our Role Model is Our President" (Screengrab)
By
Mustafa Abu Sneineh

The booklet featuring the quotations and writings of the leader is titled "Our Role Model is Our President", and is for distribution and recital among schoolchildren.

It sounds like the kind of initiative favoured in a central Asian dictatorship - but this one is for the Palestinian Authority president, Mahmoud Abbas.

The booklet, featuring the 83-year-old president's works and speeches, was launched at a ceremony in Ramallah on Thursday, and was met with sarcasm from Palestinians on social media, some of them likening it to Muammar Gaddafi’s notorious "The Green Book".

The booklet features a picture of Abbas pointing a warning finger in one of his speeches at the UN General Assemby, and will be distributed throughout Palestinian Authority-run schools in the occupied West Bank.

It will be included in the PA curriculum in the next school term and has also been sent to government agencies.

Abbas has authored hundreds of articles and books on politics and history, most controversially "The Other Face", a political-historical volume about relations between some leaders of the Zionist movement and Nazi Germany, published in the 1980s in Beirut.

"The Other Face" was Abbas’s PhD thesis, which he got from The Peoples' Friendship University in Moscow in 1982.

The new booklet is part of an initiative called “For the Sake of Palestine, We Learn”, which the PA says is aimed at enhancing “the national identity [of Palestinians]”. The initiative was started by school teacher Arij Ataya, who has encouraged the booklet to be taught in universities as well.

However, a number of Palestinian teachers and parents have met the booklet with condemnation, saying it does not introduce any "knowledge" to their children, Quds news site reported.

Some likened the move to Gaddafi's "The Green Book", a book the Libyan autocrat published in 1975 in an attempt to theorise a third way of governing that does not cling to the socialist or capitalist models of politics. The Green Book was obligatory to study in Libyan schools.

Translation: President Mahmoud Abbas issued a decision to reprint the booklet "Our Role Model is Our President" and distribute it to all educational institutions, which includes quotations from the books of President Abbas. Mahmoud Abbas in the footsteps of Gaddafi and his manual "The Green Book".

Some of Abbas' most controversial comments have also been lionised in the new volume, and widely shared by Palestinians on social media.

Included is his comment in 2012 saying, "Palestine for me is the 1967 borders and I have no right to return to Safed and live in it", referring to his city of birth that lies in what is now Israel.

Palestinian refugees still demand the right to return to their homes and towns in modern-day Israel, and saw Abbas's comment as unrepresentative of their hopes.

On 30 March 2018, Palestinians refugees in Gaza Strip launched the ongoing Great March of Return protests to bring attention to this right. More than 200 people have been killed by Israeli fire and thousands wounded.

Similarly controversial and included is the quotation: "The security coordination [with Israel] is sacred, and we will continue doing it."

The PA has been accused of assisting the Israeli occupation through security collaboration, which many see as a betrayal of the Palestinian cause.

In April Palestinians protested in solidarity with a prisoners' hunger strike, and called on the PA to cease its security coordination with the Israeli army and intelligence services. 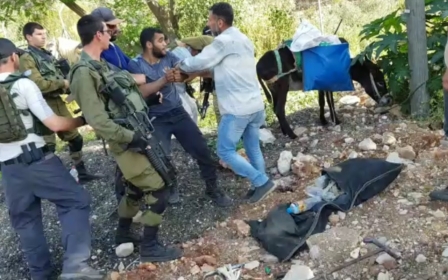 Occupation
‘This is what the occupation looks like’: Israeli forces beat, arrest Palestinian farmers