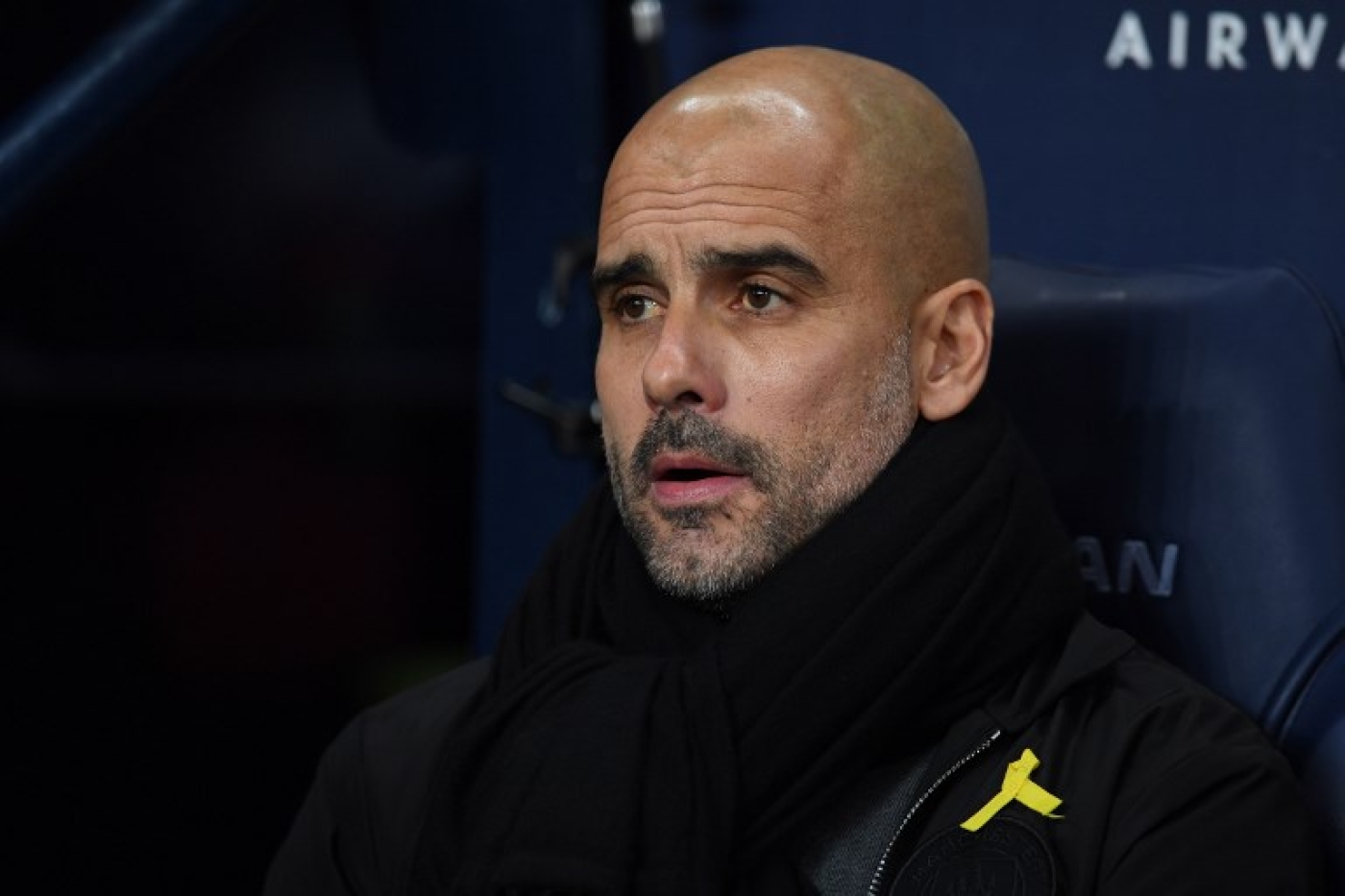 "Every country decides the way they want to live for themselves," Guardiola told a press conference (AFP)
By
MEE staff

Manchester City manager Pep Guardiola has been accused of double standards after wearing a yellow ribbon in support of Catalan political prisoners while refusing to comment on human rights abuses in the United Arab Emirates.

Guardiola, whose club is owned by the brother of Abu Dhabi’s crown prince, vowed on Sunday to continue wearing the ribbon “for humanity” despite being fined by the English Football Association last week on the grounds that the ribbon conveyed a "political message".

“Before I am a manager I am a human being and this is for humanity and there are four guys in prison and other guys, who will be in jail, they don’t have weapons, just balls in the ballot,” Guardiola said in a press conference following his side’s victory over Arsenal in the League Cup final on Sunday.

Guardiola, who comes from Catalonia and is a former player and manager of Barcelona, the club which is one of the best-known symbols of Catalan identity, was referring to the jailing by Spain of pro-independence activists and politicians since a disputed referendum in the region last year.

“It’s not about politicians, it’s about democracy, it’s about people who will give absolutely everything for democracy.”

Guardiola had opened the press conference by thanking Manchester City’s owner, Sheikh Mansour bin Zayed Al Nahyan, and later refused to be drawn when asked to comment on the state of human rights in the UAE.

Sheikh Mansour, the brother of Abu Dhabi's Crown Prince Mohammed bin Zayed, is also the deputy prime minister of the UAE and the minister of presidential affairs.

Given Guardiola opened his news conference praising Sheikh Mansour before discussing democratic freedoms at length in Catalonia, it was relevant to ask about rights in the UAE, as the sports media does relating to Qatar. (Not me passing judgement) https://t.co/vQDePmd62X

“Every country decides the way they want to live for themselves,” Guardiola said in response to a question by Associated Press reporter Rob Harris.

“If he decides to live in that (country) it is what it is. I am in a country with democracy installed since years ago and try to protect that situation.”

Nicholas McGeehan, a former Human Rights Watch researcher in the Gulf, responded to Guardiola’s comments by writing on Twitter: "You are employed by the Abu Dhabi government, which locks up and tortures critics, including pro-democracy activists."

McGeehan also drew attention to the case of prominent Emirati dissident Ahmed Mansoor, who has been in prison since March last year.

So if you stand for the principles you talked about passionately yesterday, (as opposed to just just wanting them for Catalans) show some actual balls and call on the unelected thug of a monarch who funded your #ManchesterCity success yesterday to release this guy #FreeAhmed pic.twitter.com/CApZPSSzra

Other journalists drew attention to Guardiola’s lack of engagement with the case of a French footballer who was trapped in Qatar in 2013 by the country’s labour laws following a dispute with his local club over unpaid wages.

Guardiola's defence of 'humanity', condemnation of 'arbitrary detention' and praise of 'democracy' in his press conference in stark contrast with his total lack of response when Zahir Belounis, kept in Qatar against his will, sent him an open letter, begging for help.

Zahir Belounis had addressed an open letter to Guardiola, who had served as an ambassador for Qatar’s successful 2022 World Cup bid and played in the country at the end of his career, asking him to use his “influence” to highlight the kefala labour system.

Abu Dhabi's investment in Manchester City has transformed one of English football's perennial underachievers into one of world football's richest clubs, with Guardiola's team firmly on course to win the Premier League title and also among the favourites in this season's Champions League.

But HRW in 2013 accused the UAE of using Manchester City to launder its image, suggesting that its ownership of the club was part of a strategy to "construct a public relations image of a progressive, dynamic Gulf state, which deflects attention from what is really going on in the country".

"The United Arab Emirates often uses its affluence to mask the government’s serious human rights problems. The government arbitrarily detains, and in some cases forcibly disappears, individuals who criticized the authorities, and its security forces face allegations of torturing detainees," HRW says on its website.