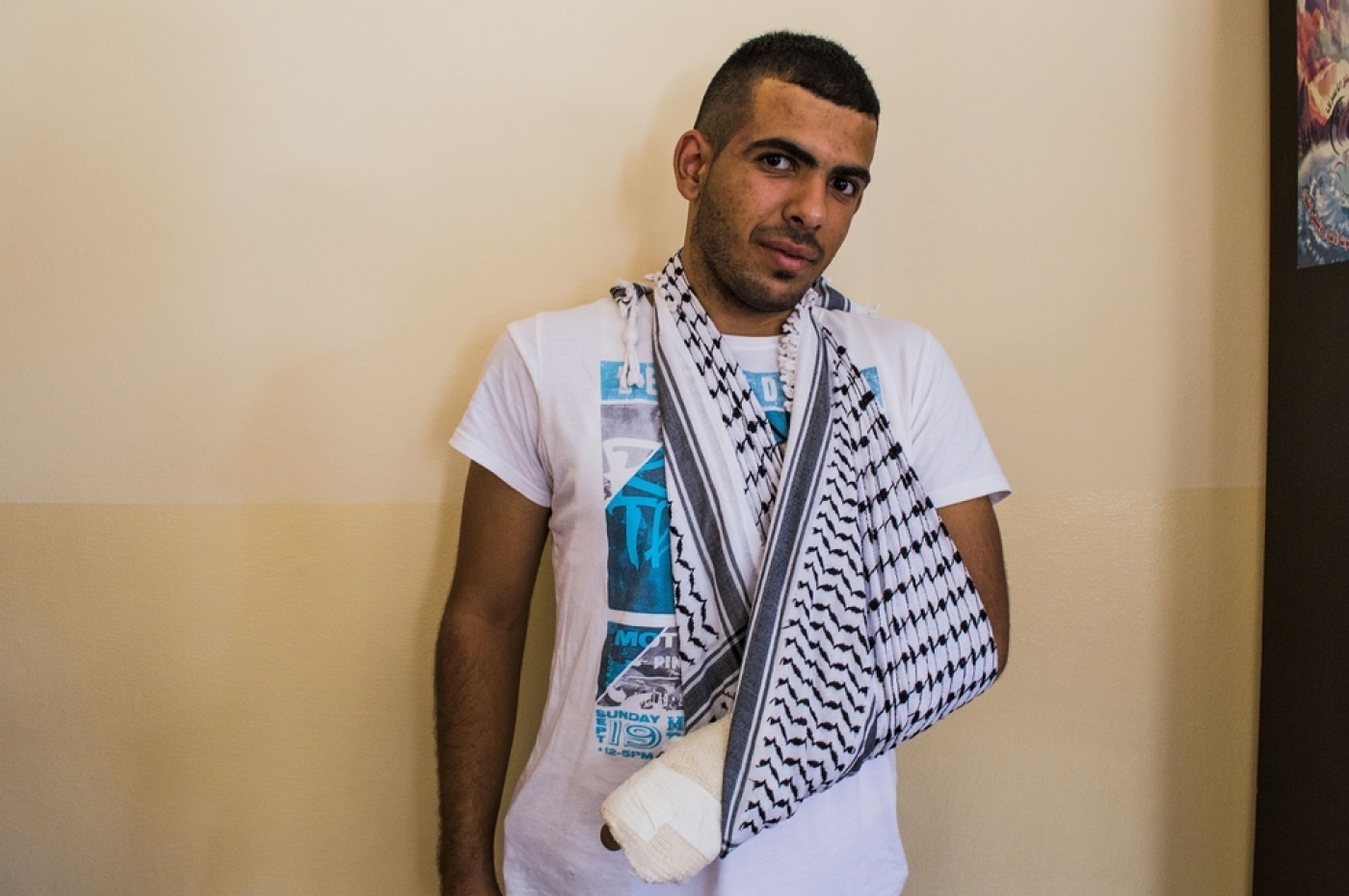 BETHLEHEM, West Bank - MEE caught Palestinian police beating Mahmoud Hamamra, 16, and his brother Ahmad Hamamra, 18, on camera on Friday afternoon during a protest in the city of Bethlehem in the southern occupied West Bank.

Both brothers were beaten on the scene, taken to a secluded location, beaten again, and then taken to a police station where, they say, police continued to brutalise them. The brothers, whose father is a police officer, said that if it wasn’t for the incident being caught on tape they would still be in jail. The video has been seen by more than 30,000 people in 24 hours on MEE's website alone.

Another teen, 14-year-old Ramiz al-Azza, is shown at the beginning of the video - wearing a blue shirt - being nabbed by the security forces. Azza was also beaten up, detained, and released the same day.

The video spread rapidly online and in the news, with local media reporting that Palestinian Prime Minister Rami Hamdallah and the commander of the Palestinian national security forces have both personally called for an investigation into the incident.

This interview has been edited and condensed for clarity

Can you explain a bit about what exactly happened yesterday?

Yesterday I went to a protest for what has been going on at al-Aqsa [mosque in Jerusalem]. When I got there the Palestinian police were already waiting there at the front of the protest between the protesters and the separation wall, where the Israeli soldiers are behind.

The protesters were shouting at the police and saying bad things to them for standing against their own people, and that’s when they started shooting tear gas at us, and after that they started charging forward and hitting people.

The first one that got to me hit me and I didn’t fall, and then the second and the third, and I was still standing but before I knew it I was surrounded and I was on the ground and they were hitting me with their clubs and kicking me. They hit me on my feet first to make sure I couldn’t get up and then my back and my arms and my head.

What happened after the police took you away, when the video stops?

What did they hit you with?

When the police first got to you and started hitting you, what was going through your mind?

When it happened I thought, that’s it, I’m going to the prison, and it’s going to be worse than this. I was thinking this is just the beginning. I knew they were going to hit me in the car and in the prison, I knew that would happen.

How did you know? You’ve heard about this happening before?

I’ve seen it with my own eyes. I wasn’t surprised by any of it to be honest.

You weren’t surprised that this was PA forces beating you, not Israel?

There isn’t a difference for us. What they did this time was crazier than normal, but maybe not. Maybe just because this was caught on video it seems so, but we see PA forces and we hear stories all the time about things like this happening.

If this wasn’t caught on video, do you think you’d be sitting here now?

No, no way. If it wasn’t for the video I would still be in prison. My brother and all the other boys. Most of the boys were released, but the ones who were beaten, if there wasn’t a video, would for sure still be arrested. Because of how we were beaten they [the security forces] would have had to say that we attacked the officers first, and we wouldn’t have been able to prove otherwise. But with the video everyone can see exactly what happened; we didn’t do anything.

When you first saw the video what went through your head?

The prime minister and a lot of other government leaders have come out and made statements against what happened, how do you feel about that?

It’s good that the bigger people in the government are coming out against this, but I also want my rights. They just fired the three captains that were there, and none of the guys who actually beat us will be fired.

One of the officers was the worst. He’s the one that hit me really badly, and he came into the room later and told me he was the one that had hit me the worst and laughed at me.

I know all of their faces. I can identify each guy that hit me in the street and in the car and in the station, but I know nothing will happen to them. This has happened a lot and nothing has ever changed. I just hope in the future the police will think twice before doing something like this.

Has anyone told you what the government plans to do to try to make up for this?

They said they’ll pay for our medical expenses, but that won’t fix everything. This happened to my brother and me, nothing can change that. They broke my phone even; are they going to pay for my phone? No, of course they won’t.

How was what happened to you different than your brother?

Most of what happened we were together, but when they first attacked me my brother was farther away from me, like you can see in the video. The police were yelling for all the guys who support the Fatah party to get away. They only wanted Hamas and PFLP [Popular Front for the Liberation of Palestine] and supporters of other parties at first, but then they just went for everyone.

Your family is Fatah, yes?

Yea, but when the police approached me he was like three metres away from me and he asked me if I was the son of the colonel and I said yes. That’s when he jumped at me and others joined him. Sometimes there are problems within the different police sectors, and I would guess that was why I was attacked.

How did this make you feel toward the police?

I don’t want to say we don’t like the police, our father is a police officer, but at the same time there is right and wrong and the people need to have their rights.

Where do you see this going from here?

This will not be finished easily. We will keep up with it until we see some kind of results. I have family and friends in the government, and my father, and the people in the government, even the president, care about what happened. I want the government to say they will never do this again, I want to make it clear that I didn’t do anything wrong. I would like to work with the government when I am older, and I don’t want this to be a problem later. The government has problems but I think they can be fixed, and I want to be someone who helps to fix them.