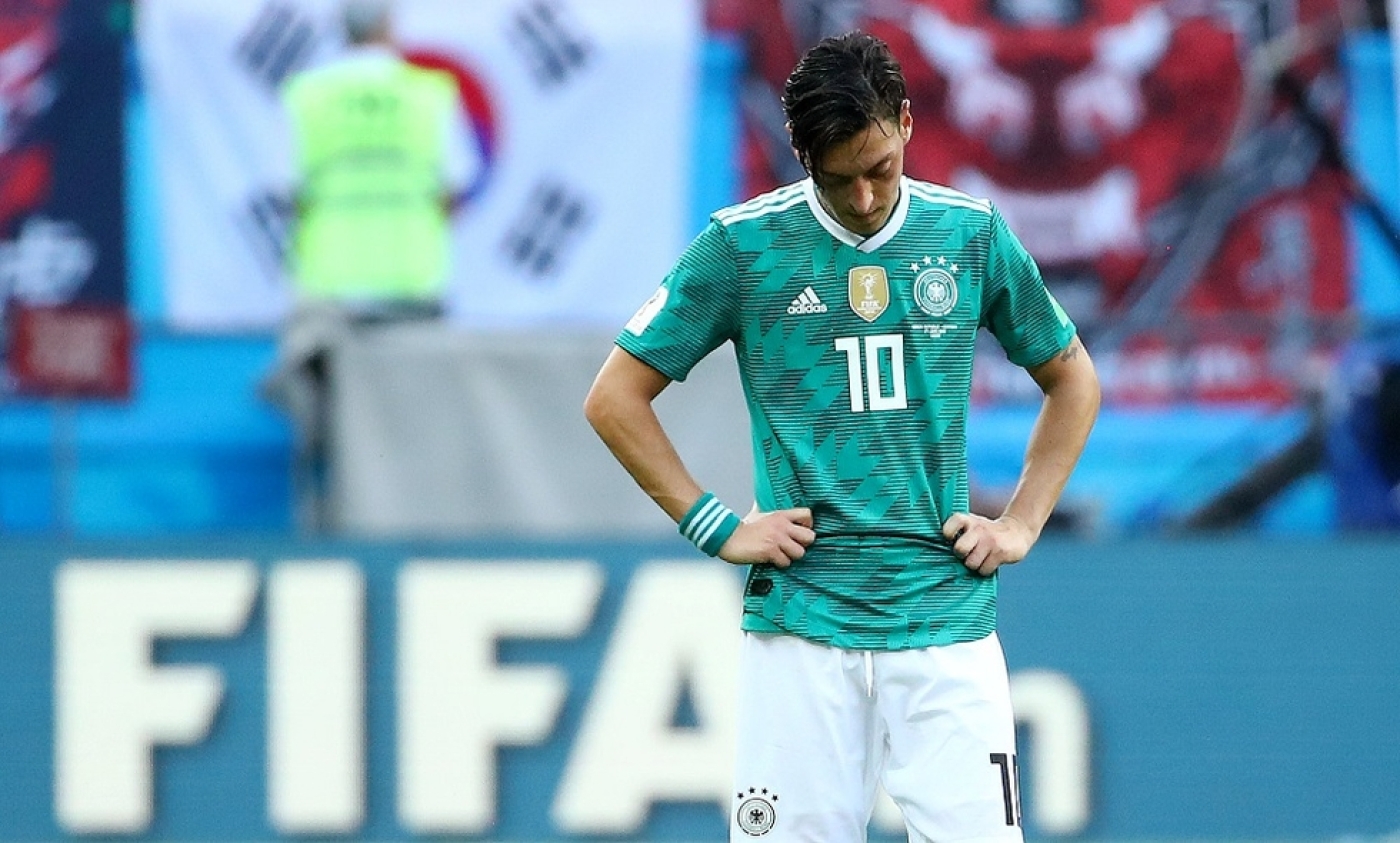 Ozil, pictured following Germany's defeat by South Korea at the World Cup on 27 June (Reuters)
By
MEE and agencies

Mesut Ozil has retired from international football due to criticism of the Germany and Arsenal player following a meeting with Turkish President Recep Tayyip Erdogan.

In a statement issued on Sunday, Ozil said he could no longer play for the German national team – who he helped to win the 2014 World Cup – while he has a “feeling of racism and disrespect”.

“I am German when we win, an immigrant when we lose,” the 29-year-old said in a three-part statement.

Ozil has said he had "no political intentions" when he was pictured with Turkey's president in May, in a move that led to widespread anger in Germany for whom he plays.

Ozil and Manchester City's Ilkay Gundogan, who are both Germany internationals of Turkish descent, were criticised by the German Football Association (DFB) for meeting Erdogan in London, ahead of the World Cup.

The past couple of weeks have given me time to reflect, and time to think over the events of the last few months. Consequently, I want to share my thoughts and feelings about what has happened. pic.twitter.com/WpWrlHxx74

“My job is a football player and not a politician, and our meeting was not an endorsement of any policies. The treatment I have received from the DFB and many others makes me no longer want to wear the German national team shirt. I feel unwanted and think what I have achieved since my international debut in 2009 has been forgotten.”

In a direct reference to the German football federation's president, Reinhard Grindel, Ozil said: “People with racially discriminative backgrounds should not be allowed to work in the largest football federation in the world that has players from dual‑heritage families. Attitudes like theirs simply do not reflect the players they supposedly represent. In the eyes of Grindel and his supporters, I am German when we win but I am an immigrant when we lose."

Ozil said he "would have been disrespecting his ancestors' roots" if he had not met with Erdogan and "whether it had been the Turkish or German president, my actions would have been no different".

He also said he was personally being blamed for the German squad's poor performance at this year's World Cup and that some German newspapers were using the Erdogan event as right-wing propaganda to further their political cause.

The photographs unleashed a storm of criticism from politicians across Germany's political spectrum, who argued that Erdogan does not sufficiently respect German values.

After the event in London, photographs were released by Turkey's governing AK Party in the build-up to July elections in the country, which Erdogan won in the first round.

Gundogan presented Erdogan at the London meeting with a Manchester City shirt bearing the words: "To my president, with my respects."

The Manchester City forward later said the meeting had no political intentions, but Ozil had not spoken about the event until now.

Gundogan and Ozil were booed by German supporters in two friendlies against Austria and Saudi Arabia ahead of the World Cup, and Ozil faced criticism in the German press during the team's disastrous performance in the tournament in June.

Explaining he could accept criticism of his play from a newspaper or pundit, Ozil said: "But what I can't accept are German media outlets repeatedly blaming my dual-heritage and a simple picture for a bad World Cup on behalf of an entire squad."

Ozil also said: "Certain German newspapers are using my background and photo with President Erdogan as right-wing propaganda to further their political cause."

He said a planned visit to his former school in Gelsenkirchen, where he had helped set up a football project for disadvantaged children, had been cancelled when two of his charitable partners said they "no longer wanted to work with me at this time".

The school then told his management that they no longer wanted him to be there at this time as "they feared the media," he said, due to his picture with Erdogan, especially with the "right-wing party in Gelsenkirchen on the rise".

"In all honesty, this really hurt. Despite being a student of theirs back when I was younger, I was made to feel unwanted and unworthy of their time," Ozil said.

The midfielder said that some sponsors had stood by him but "I was renounced by another partner. As they are also a sponsor of the DFB, I was asked to take part in a promotional video for the World Cup."

"Yet after my picture with President Erdogan, they took me out of the campaigns and cancelled all promotional activities that were scheduled. For them, it was no longer good to be seen with me and called the situation 'crisis management'."

Ozil started in the team's first group match, a shock 1-0 loss to Mexico, appearing a shadow of his creative self from four years ago when he helped Germany win their fourth World Cup.

He was dropped for their last-gasp win over Sweden but returned to the starting line-up for their final group match against South Korea, when he made little impact in a 2-0 defeat that sealed their elimination.

Some high-profile names, including Oliver Bierhoff and Ottmar Hitzfeld, suggested that the pair should not have been allowed to represent Germany at the World Cup due to their actions.

In his statement, Ozil said: "Although the German media have portrayed something different, the truth is that not meeting with the president would have been disrespecting the roots of my ancestors, who I know would be proud of where I am today.

"For me, it didn't matter who was President, it mattered that it was the president. Having respect for political office is a view I'm sure both the Queen and Prime Minister Theresa May share when they too hosted Erdogan in London."