Russian President Vladimir Putin is to host the Egyptian President, the Jordanian King and the Crown Prince of Abu Dhabi in Moscow to discuss the Syrian crisis and take part in a showcase of Russia's military industry.

Jordanian King Abdullah II and Crown Prince Sheikh Mohammed bin Zayed al-Nahyan, who is widely seen as holding the reins of power in the UAE, are believed to have arrived last night, while before Egyptian President Abdel Fattah al-Sisi is expected to arrive later today when he is due to attend the Maks-2015 military exhibition.

Despite foreign interest in the Russian space and defence industries, no international contracts are expected to be signed during the salon, a spokesman for Russia's state defence import-export company Rosoboronexport, Vyacheslav Davydenko, told AFP last week.

While the official reason behind the Middle Eastern leaders' visit to Moscow is the Maks-2015, Alarabiya News reported that strategic talks are expected to take place among the leaders.

According to Alarabiya sources, the talks will include a discussion of Arab-Iranian relations in general with a focus on the situations in Yemen and Syria specifically. Moscow is expected to represent Iran in the talks, said the Arabic news website.

The Kremlin has also said that  Putin's talks with the Crown Prince of Abu Dhabi will be focused on energy, as well as "stability and security" in the Middle East and Northern Africa.

Meanwhile, the Russian president and the head of Jordan's Hashemite kingdom are also expected to discuss the prospect of jointly building Jordan's first nuclear station, according to the Kremlin.

Government delegations from the Middle East have been flooding into Moscow in recent weeks and days, with a Syrian opposition delegation which is tolerated by the government of President Bashar al-Assad arriving on Sunday for talks on the crisis in their war-torn country.

Iranian officials are also expected in Moscow this week to finalise negotiations for Tehran's purchase of S-300 air defence systems from Russia, much to the dismay of the United States and Israel.

The visits come as Russia, one of the few remaining allies of the Assad government in Syria, has renewed diplomatic efforts to find a resolution to the four-year civil war that has claimed some 240,000 lives.

Russian Foreign Minister Sergei Lavrov recently hosted his Saudi and Iranian counterparts in an effort to push for a plan to broaden the current US-led coalition against the Islamic State group, which would include Syria's government and its allies.

Assad's opponents, however, have firmly rejected the idea.

Putin and his foreign guests will attend the opening on the biennial Maks salon, where more than 700 Russian and foreign companies from 30 countries will be represented.

The salon opens as Russia is grappling with a crippling economic crisis on the back of Western sanctions over the Ukraine crisis and lower oil prices.

Russia has nonetheless been spending billions of dollars to modernise its army and conduct snap combat readiness checks from the Arctic to the Far East.

Domestic arms orders, including the Russian army's purchase of some 50 Sukhoi-35 fighter jets, are expected to be made at the salon, business daily Vedomosti reported.

The Sukhoi T-50, a 5th generation fighter jet conceived jointly with India, is expected to be introduced to the Russian army next year. Diplomacy
Putin in Egypt in bid to expand Russian influence 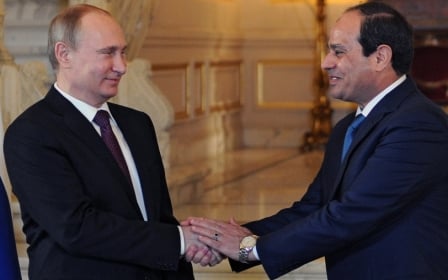