Money can secure political influence in Washington, and much of it either comes from Middle East or relates to its pressing issues NEW YORK, United States – The self-satisfied back-slapping was too smug to ignore.

It started earlier this month when Ben Rhodes, a senior White House official, told the New York Times Magazine how the media had been manipulated to convince a sceptical American public to back the nuclear deal with Iran.

He cited the Ploughshares Fund, a lobby group for nuclear disarmament, which gave J-Street, a liberal, pro-Israel campaign group, $576,500 to promote the deal and more than $281,000 to the National Iranian American Council.

They built an “echo chamber,” said Rhodes, a phalanx of nuclear experts and security pundits who were ready to pick up the phone to field journalists’ questions and use social media to sideswipe critics and steer the debate.

At issue are not the rights and wrongs of the Iran deal itself, which is by one standard a ground-breaking diplomatic effort of US President Barack Obama that may help reform Iran and ease tensions in the Middle East.

But Rhodes’s comments led to an uproar, largely because he described officials getting into bed with a single-issue pressure group, and its cash, to use a supposedly-independent media to sway public opinion on a divisive topic.

The cherry on the cake was how Rhodes seemed so pleased with himself about it.

His glee may be undeserved. The latest Gallup survey showed that only 30 percent of Americans support the pact, while 57 percent disapprove. A win by presumptive Republican nominee Donald Trump in November’s presidential ballot could see the deal unravel.

But the bargain stands for the time being and serves to remind us how money can secure political influence in Washington and how much of that cash either comes from the Middle East’s deep pockets or relates to its pressing issues.

The region’s big spenders are the oil-rich Gulf states, including the United Arab Emirates and Saudi Arabia, which spend millions on public relations firms, lobbyists and think-tanks that in turn influence US politicians, media coverage and public opinion.

According to the Sunlight Foundation, a transparency group, the UAE topped the list of countries using cash to push their national interests in 2013, with a total of $14.1 million. The Saudis spent $11.2 million. Germany, Canada and Mexico also ranked in the top five.

Petrodollars are easier to see than their results, Hussein Ibish, a scholar at the Arab Gulf States Institute in Washington, told Middle East Eye.

“White House talk about Arab-occupied territory on Massachusetts Avenue or K Street is ironic because, whatever their total investment may be, the US’s Gulf Arab partners certainly haven’t been getting their way regarding American policies in recent years,” Ibish said.

“That’s a pretty ineffective kind of occupation, by any standards.”

Other documents, registered with the Department of Justice under a 1938 anti-Nazi propaganda law, show UAE deals with Glover Park Group, Brunswick Group, Harbour Group and Camstoll Group, which is staffed by several former US Treasury Department officials.

The UAE has since used its lobbying muscle to advance its battle against the Muslim Brotherhood. An investigation by The Intercept showed how UAE lobbyists cajoled compliant US journalists into tarring Qatar as a state sponsor of hardline militants.

Doha, which backed the Muslim Brotherhood’s Mohamed Morsi in Egypt’s political transition after the Arab Spring, tried to convince the US and other Western powers that political Islam was the Arab world’s best hope for democracy.

Like their Gulf neighbours, the Saudis are equally dependent on America’s arms sales and security umbrella and spend a fortune on US public relations experts and lobbyists to help spin reporters and influence policymakers.

In March, BGR Government Affairs disclosed a $500,000-a-year deal to provide “public relations and media management services” to the Centre for Studies and Media Affairs at the Saudi Royal Court, a government entity.

In January, the lobbying firm Podesta disclosed a $140,000-a-month deal with the same entity. In March, Saudi Arabia launched the Saudi American Public Relation Affairs Committee (SAPRAC) to “strengthen the historic relationship” between the unlikely allies.

“Saudi Arabia has to spend a great deal on public relations because it has no natural constituency in the US. There are no Americans calling congressmen to advocate for pro-Saudi policies,” Cristol told MEE.

“But all the money in the world does not assure desired outcomes. Behind-the-scenes lobbying did not stop a US bill that could see Saudis sued over the 9/11 attacks because lawmakers didn’t want to lose public support by voting against it.”

It does not stop with the Gulf. Egypt has a $250,000-a-month deal for “public diplomacy, strategic communications counsel and government relations services” with Glover Park Group, a Washington-based public relations outfit.

And it does not stop at lobbying firms. Gulf money has quietly paid for international exchange trips for US lawmakers and students and filled the coffers of such influential think-tanks as the Center for Strategic and International Studies and Brookings.

Cristol, a scholar at the World Policy Institute, a New York-based think-tank, sees hydrocarbon profits behind much supposedly-independent research.

“Does it make me think a little bit harder before I trust something coming from an organisation that receives large amounts of funding from the Gulf? Yes, absolutely. But do I still often rely on and trust those sources? Also, yes,” said Cristol.

There are no hard-and-fast rules about where NPR and other media outlets get cash and inspiration. (While popular in the US, MEE is UK-registered and editorially independent. It funds itself by selling content to other outlets for translation.)

According to US Department of Justice files, Israel’s government spends far less than other Mideast countries. Much pro-Israel money, however, comes from within the US, notably Las Vegas casino magnate Sheldon Adelson’s $100 million donation to Republican candidate Mitt Romney’s 2012 White House bid.

Reports suggest that Adelson has a similar sum in the offing for Trump.

The Center for Responsive Politics tracks money in US politics via political action committees (PACs) that fund candidates’ campaigns but are capped, and the so-called super PACs of unlimited donations from individuals, groups and firms, which can only fund specific items, such as television adverts, rather than candidates.

In the 2014 election cycle, pro-Israel funders spent $11.6m on politicians - including $8.6m from individuals and $2.9m from PACs, to advance such Israeli interests as arms sales, security and isolating Iran, which backs the anti-Israel militia Hezbollah.

According to Ibish, shekels beat petrodollars.

“In the US at least, domestic interests, pressures and considerations tend to be infinitely more impactful than anything coming from the outside,” Ibish told MEE.

“This is why the coalition of broad-ranging pro-Israel constituencies has been uniquely effective. It’s almost entirely a domestic political phenomenon, and barely, if at all, reflects actual Israeli interests directly. No other Middle East perspective has a similar base of autonomous American political support, so none can match it.” 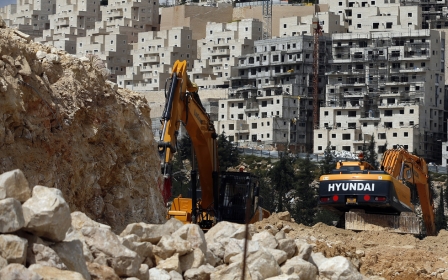