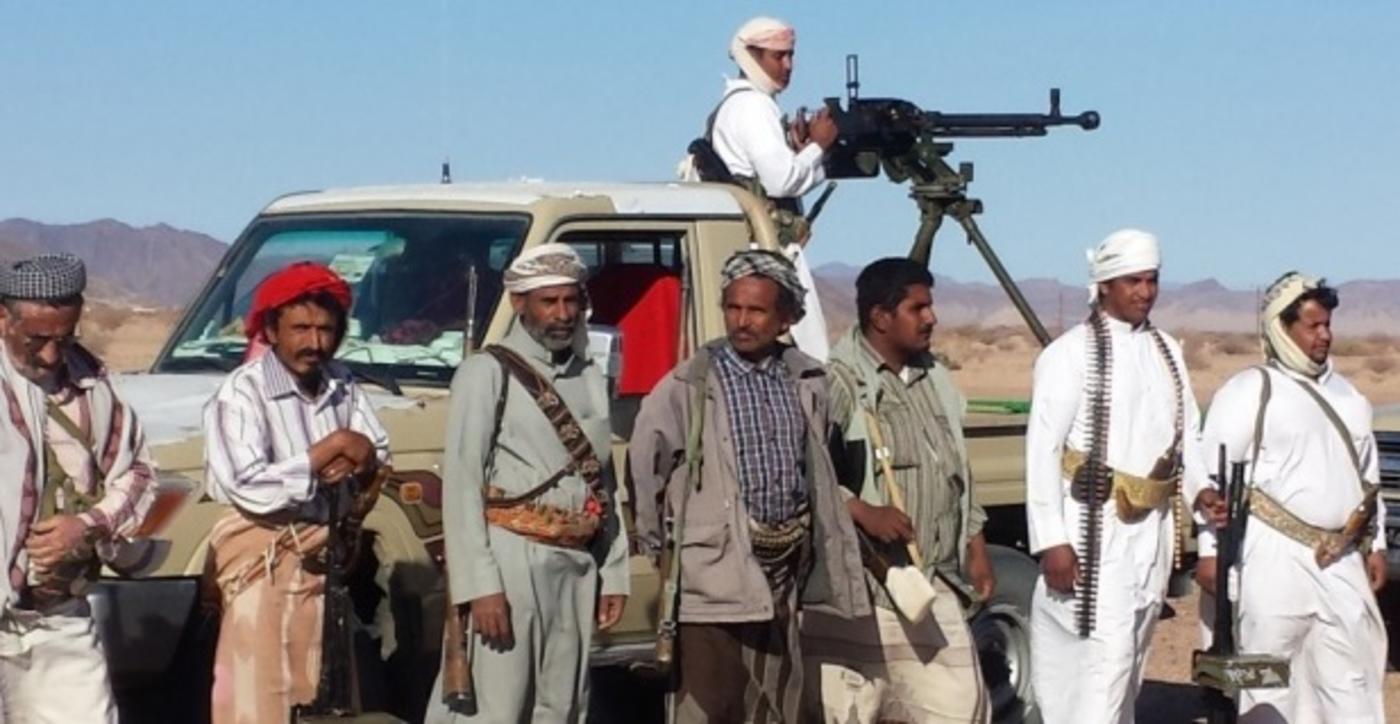 The Houthis and al-Qaeda are inflaming sectarian warfare in Yemen, according to local journalist Mohammed al-Shaibani (AFP)
By
Saeed Al-Batati

AL-MUKALLA, Yemen - Saddam al-Lahji could not believe what was happening in the small city of al-Huta in the southern province of Lahj. On Wednesday, a mob of people unexpectedly wreaked havoc in the city by storming and looting the main government and security institutions without facing much resistance from security forces.

The attackers, mainly locals, along with a few al-Qaeda militants, began by attacking the Central Security Force camp and plundering light weapons, ammunition and furniture.

The attackers moved quickly to police headquarters and General Security buildings, ransacking them like the previous buildings. They engaged in brief clashes with guards at the governor’s building and with Political Security (intelligence) guards as they entered.

“They killed all the soldiers who tried to resist them,” al-Lahji said. By the end of the day, as many as 10 soldiers were killed in the assaults on the buildings.

Like many people in his city, al-Lahji could not find an explanation for the outbreak of violence in al-Huta. Security forces and the army that gave up on Friday have repelled many attempts by the local branch of al-Qaeda to capture the city.

“They used to have many checkpoints at the entrance of the city. Nobody responded to calls to protect the city from the vandals,” he said.

Yasser al-Yafae, a local journalist who currently lives in the port city of Aden, linked the sudden escalation of violence in Lahj to the dramatic events in the bordering city of Aden.

On Thursday, forces loyal to beleaguered president Abd Rabbuh Mansour Hadi defeated the Special Security Forces (SSF), a security unit loyal to former president Ali Abdullah Saleh, and expelled them from the city’s airport. Hundreds of soldiers fled from the SSF camp as Hadi’s forces attacked them with tanks, putting an end to a 20-day rebellion.

Following the humiliating defeat of their colleagues in Aden, al-Yafae said, the SSF branch in al-Huta took revenge on Hadi by retreating from the city with heavy weapons and soldiers, creating an environment for al-Qaeda and other armed men to take over.

The poverty-stricken country plunged into a new wave of turmoil in January when Houthi rebels attacked the presidential palace, forcing Hadi and his prime minister, Khaled Bahah, to resign. The rebels put Hadi, Bahah and some other officials under house arrest. Hadi fled south last month and is now based in Aden.

Hadi, however, has faced serious challenges from some security units who have refused to  recognise his authority and have remained loyal to Saleh and the Houthis.

Abdulhafed al-Saqqaf, the chief of security of Aden’s SSF, has rejected Hadi’s orders, claiming that Hadi wants to allow al-Qaeda to control Aden. At first, Hadi appeared to be reluctant to use force to get rid of al-Saqqaf, but the last straw was on Thursday when al-Saqqaf’s forces captured part of Aden’s airport.

Analysts think that Saleh and Houthis are moving to send troops to the south to remove Hadi from Aden after failing to overthrow Hadi with SSF.

“They put their weight behind al-Saqqaf’s forces to quickly retake Aden from Hadi,” Mohammed al-Shaibani, the deputy editor of the partisan al-Tagamoa weekly newspaper, told MEE. “Now, they are looking into sending ground forces and using warplanes to bomb Aden.”

Al-Shaibani said that Saleh allied with the Houthis to get rid of his opponents, which include Hadi, who appeared to be aware of the threat.

Hadi’s forces, which defeated the rival forces in Aden, are made up of hundreds of members of popular committees from his hometown Abyn, army troops and affiliated tribes. Hadi established these forces when tension flared between him and the Houthis.

Al-Shaibani said that Hadi is forming his own army to protect himself from two major forces - the Houthi-Saleh alliance and south Yemen separatists.

“Hadi knows that Saleh and Houthis have nothing to lose and they are coming for him,” he said.

Meanwhile, the Southern Movement (known as Hirak), that calls for the revival of an independent state in south Yemen, has become more powerful since 2007.

“The Hirak think that Hadi brought them backwards after getting closer to regaining their state.”

As Hadi was working hard to tighten his grip on the south, violence broke out in Sanaa on Friday when two suicide bombers hit Houthi mosques, killing more than 110 and injuring hundreds more. The attack fueled concerns about wider sectarian violence similar to Syria.

Al-Qaeda militants threatened to fight the Houthis, who they see as non-believers. The Houthis and al-Qaeda are two forces that will inflame sectarian warfare, according to al-Shaibani.

“Ansar Allah [the Houthis] took advantage of insecurity in the north and Ansar al-Sharia [al-Qaeda] cashed in on turmoil in the south.” Inside Yemen
Yemenis divided over capital: Can Aden replace Sanaa?