Who is Mohamed Ali? Meet the tycoon-turned-YouTube star with Sisi in his sights

How a construction magnate with a sideline in acting, who also claims to be a former wrestling champion, entered the ring to take on the president of Egypt 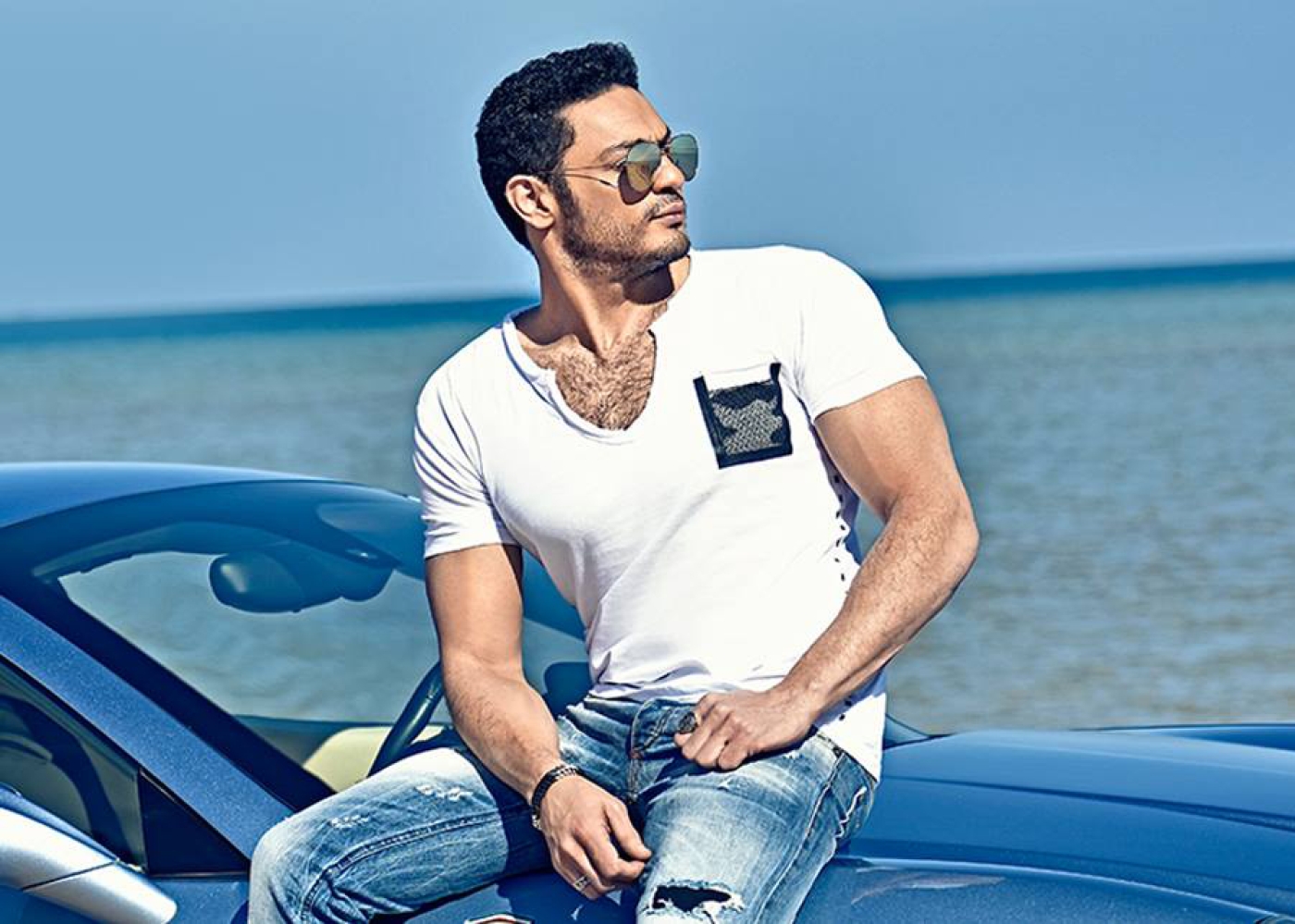 Egyptian tycoon Mohamed Ali, once a government insider, has turned into a mouthpiece for Egypt's opposition to Sisi (Facebook/@Maactor)
By
MEE staff

A whistleblower's video testimonies criticising Egyptian leader Abdel Fattah el-Sisi have triggered an online movement calling for the departure of the general-turned-president.

Mohamed Ali, 43, is an actor, film producer and real-estate investor who has been working in the construction sector in Egypt for the past 15 years.

According to his own account, he comes from a middle-class family from the Agouza neighbourhood in the Giza governorate. His father, once Egypt’s bodybuilding champion and the manager of Egypt's bodybuilding team, also worked as a gold seller in Cairo to support his family.

Ali claims to have also excelled in a number of sports and says he was once a wrestling champion. As an actor, Ali has had roles in four television series and three movies since 2013.

His family was not wealthy enough to give him a high-quality education, he says, adding that he abandoned a degree in business administration at Cairo University after two years of study and worked in 14 different professions before moving into the construction industry.

He says he has never been a member of any political party and denies being an activist. In one of his videos, however, he says he took part in protests against then-president Mohamed Morsi in November 2012.

Ali also says that he used a fortune made from his construction business to fund The Other Land, a self-produced film in which he also starred, which tells a tragic story of young Egyptians taking the dangerous migration journey across the Mediterranean to escape poverty.

The film earned him the 2019 Outstanding Art for Peace prize at the Luxembourg Peace Prize awards in June.

Over 15 years, Ali owned a construction company called Amlaak that worked with the Egyptian army’s Engineering Authority to implement mega projects across the country. Many of those projects included building residential homes and palaces for senior military officials, including Sisi who previously served as head of the military intelligence apparatus and then minister of defence.

Ali did not respond to Middle East Eye's requests for comment for this story. When approached by MEE to verify Ali’s claims that his company was involved in building palaces for Sisi, the Egyptian government did not reply to the allegations.

But Sisi seemed to confirm Ali’s claims in his latest public remarks on the allegations, saying that his government had been building new palaces for the sake of Egypt, not for himself. He did not refute any of Ali’s claims.

“Yes, I have built presidential palaces, and will continue to do so. I am creating a new state; nothing is registered with my name, it is built for Egypt.”

Ali said in his first video that he is currently living with his five children in self-imposed exile in Barcelona, Spain, fearing for his family’s safety after deciding to speak publicly about the projects assigned to his company by the army.

In April, he announced the opening of a Barcelona office for his company Amlaak for Investment and Development.  In an interview with Vanity Fair magazine in Spanish, he said his company’s first project would be an international university on the coast of Barcelona.

In his latest video on Friday afternoon, Ali said he has been on the run since his videos went viral, and that he is contstantly traveling between cities to avoid being captured by Egyptian government agents. He also said he is hiding his children at an unknown location to protect them.

In a series of videos posted on Facebook and YouTube since 2 September, Ali began by accusing top army generals of failing to pay him millions of dollars for a number of projects his company built in collaboration with the army.

While demanding to be paid around 200 million Egyptian pounds ($12 million), he revealed the purported budgets of several projects overseen by the army and implemented by his company.

The projects, he said, were assigned directly to his company without feasibility studies or a competitive bidding process.

While his testimonies included revelations about the expenditure of top military officials, his videos about Sisi’s own palatial residences have sparked anger and highlighted a stark contrast between the president's claims that Egyptians “are very poor” and his spending on palaces.

Ali worked with the army long before Sisi became president.

In one video, Ali claims that Sisi ordered the building of a new luxury house for his family in the middle-class Hilmiya district in Cairo once he was appointed defence minister by late president Mohamed Morsi in 2012.

He says the furnishing of the palace coincided with the Ittihadeya clashes between Morsi supporters and opponents in November 2012 but that Sisi and his wife visited the new house to give feedback on its furnishing on the same day of the violent clashes that month.

After he became president, Sisi allegedly ordered the construction of a new presidential residence in a seaside resort in Alexandria, with a cost of 250 million Egyptian pounds ($15m) despite the existence of an old presidential rest house in the same area.

Other palaces built by Sisi include the new headquarters of the presidency in the new administrative capital and the summer presidential palace currently under construction in the new Alamein city, located 120 km west of Alexandria.

Ali's videos in colloquial Egyptian Arabic and his body language have earned him a massive online following.

His appeal not only stems from his exposure of the size of projects overseen by the army, but the disparaging language that he uses to refer to Sisi, describing him as “a failed man”, “a disgrace” and a “midget”, and accusing him of corruption and hypocrisy.

"But Mohamed Ali’s testimony resonated more with the public because he is an eyewitness, rather than an analyst, observer or opposition activist."

In his videos, Ali blames the corrupt system on Sisi as the army’s leader, and admits he was part of that system.

“We are all corrupt, but we are not to blame. The system is to blame. He does not want to change the system. We need a new system.”

But Nour says that Ali's previous work with the Egyptian army should not be used to incriminate him.

"It is naive to criticise him only because he used to work in the same system he is exposing. Even in Egyptian and international laws, a witness to a crime could be acquitted after giving evidence to expose it, even if he was part of it," he told MEE.

"Mohamed Ali has a special charisma by virtue of being an actor, with a body language that is relatable to the people. That led to the spread of his videos both among those who follow politics and those with no interest in politics."

According to Mahmoud Gamal, a military affairs analyst, Ali's use of derogatory language against Sisi amounts to "character assassination".

"Within two weeks, he assassinated the character of Sisi," he told MEE.

The impact of Ali's videos has been reflected in Sisi's remarks last week, when he admitted that Ali's allegations might indeed "shake the trust" of junior officers in their leaders. 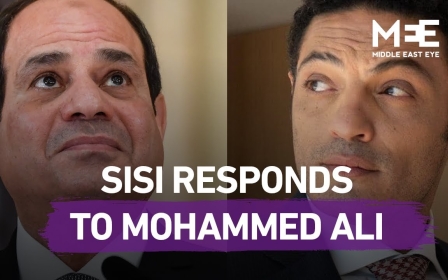 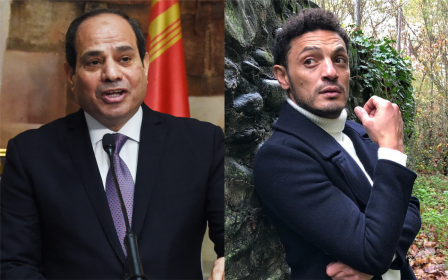 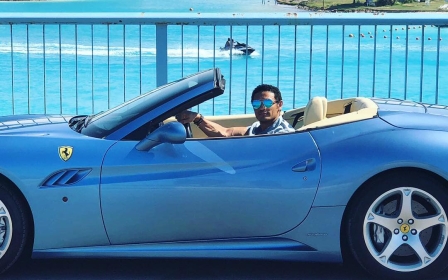