American-Egyptian journalist Mohammed Soltan has slipped into a sugar coma after spending 281 days on hunger strike.

Sara Mohamed, a spokesperson for the Soltan family, said on Sunday that fellow prisoners had witnessed the activist being transferred to intensive care.

Soltan is charged, along with 51 other defendants with “forming an operations room to direct the terrorist Muslim Brotherhood group to defy the government during the Rabaa sit-in dispersal and to spread chaos in the country.”

He was arrested in August 2013 after taking part in a sit-in at Rabaa al-Adawiya, at which hundreds of Muslim Brotherhood supporters were killed by the Egyptian army.

Amnesty International had warned in early October that Soltan’s health had deteriorated dramatically and that he has been passing out and bleeding from the mouth and nose.

The news sparked a flurry of comments on social media:

My heart & prayers are with my young hero #MohamedSoltan & his family. He went into coma after 281 days of hunger... http://t.co/btve1rDesj

In October, the Cairo Criminal Court thew out an appeal by the US State Department requesting Soltan’s release, stating that the Egyptian judiciary refused outside interference.

In May, Mohammed Soltan released a video appealing to the US for his release:

Following the crackdown on the Muslim Brotherhood after the ouster of former President Mohamed Morsi in June 2013, tens of thousands have been arrested, although figures vary.

According to WikiThawra, an initiative run by the Egyptian Center for Economic and Social rights, at least 80 people died in custody over the past year and more than 40,000 people were detained or indicted between July 2013 and mid-May 2014. However, the official figures for July 2013 to March 2014 put the number of arrests at 16,000.

Mohammed Soltan is one of over 80 journalists who are incarcerated in Egypt on various charges of illegal assembly and publishing false news, according to the Association for Freedom of Thought and Expression.

According to the Association for Freedom of Thought and Expression, an anti-censorship group, over 80 journalists are incarcerated in Egypt on various charges of illegal assembly and publishing false news. - See more at: http://www.middleeasteye.net/news/egyptian-journalists-condemn-newspaper-editors-state-loyalty-pledge-486486532#sthash.HYHsnib9.dpuf 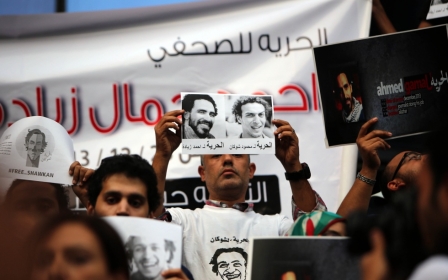 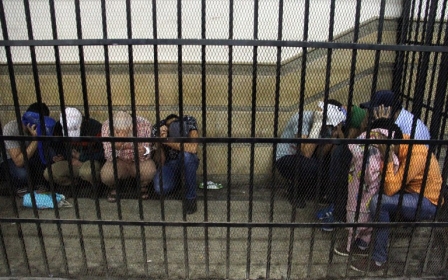