Elections are being held in Morocco. Who are the favourites - and how will the high numbers of non-voters affect the result? 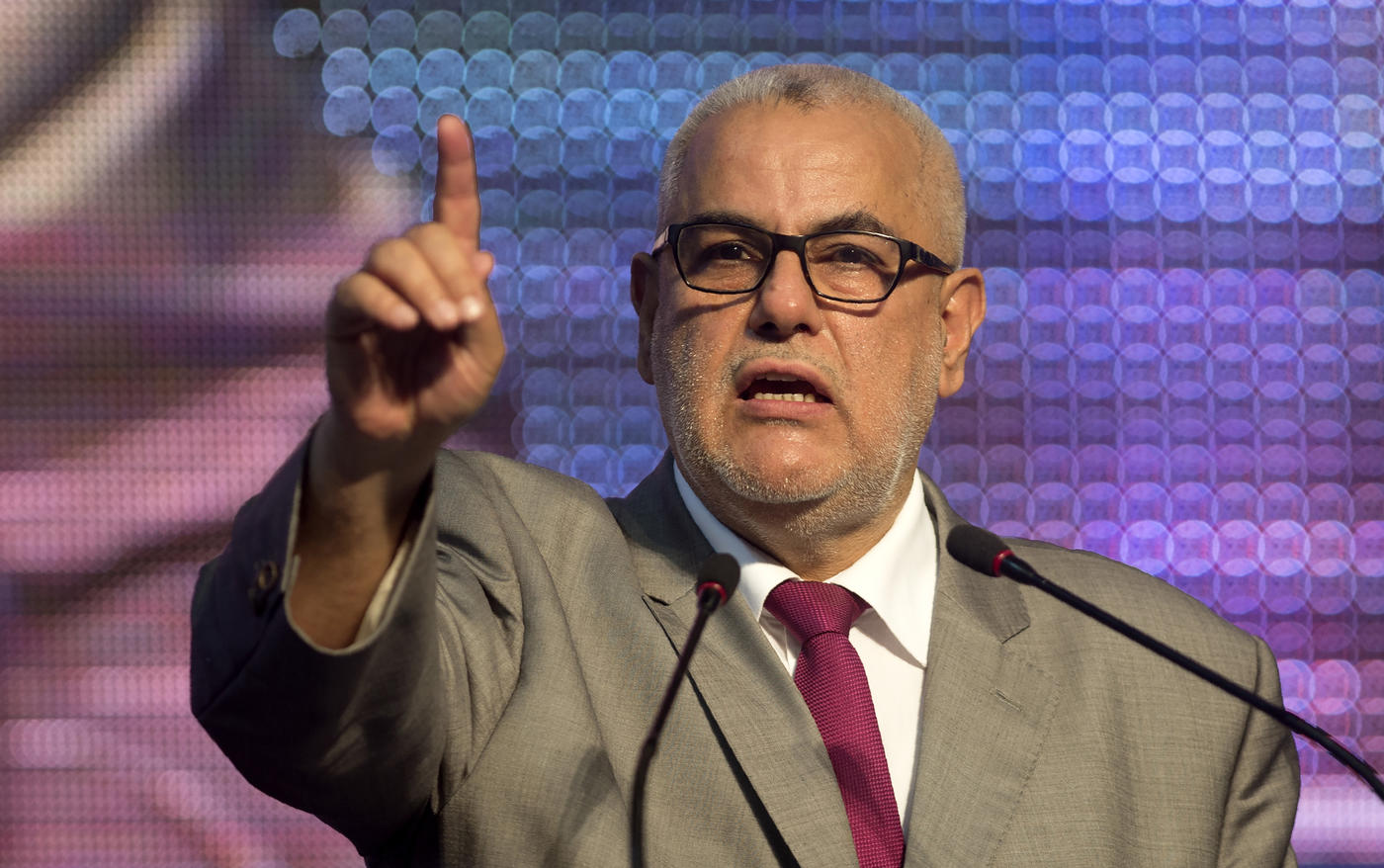 Abdelilah Benkirane, prime minister and secretary-general of the Islamist Justice and Development Party (PJD), at a campaign meeting in Rabat (AFP)

What is at stake?

The elections are really important: there are 395 seats to be filled in parliament and, in order to win some, a party has to attract at least 3 percent of the votes.

The last legislative elections were held in November 2011 and were won by the Justice and Development party (PJD).

According to the terms of the new constitution, passed in 2011 after the Arab Spring, the winning party will lead the coalition government.

For all the parties, “representation within parliament, ministerial positions and integration of the elites in institutions are at stake," explains Omar Brouksy, professor of constitutional and public law at Settat University and author of Mohammed VI: Behind The Masks.

For the Islamist Justice and Development Party (PJD), these elections are a test. Based on how it does, the party will be able to assess whether it is still popular in the country and if it still remains the primary political force.

The high number of abstentions is another issue for the elections. “Even more than ever, Moroccans tend not to register to vote," explains Morocco Votes,  a guide published by Nabil Mouline, a researcher at the Centre National de la Recherche Scientifique (CNRS). "When they do register, blank votes are their answers, even though the political rewards are getting larger with each election.”

In order to understand how voter abstention impacts the results, we need only look at the figures. “In 2011, PJD’s victory was not overwhelming. In reality, the party only got 10 percent out of 45 percent of all the ballots cast,” explains Brouksy.

Who are the main parties?

The three main parties in the Moroccan political landscape - the PJD (an Islamist movement), the Authenticity and Modernity Party (PAM), which is close to the monarchy, and the Istiqlal or Independence Party (nationalists) - are the only ones who are actually running in all 92 districts of the country.

After that are the Socialist Union of Popular Forces (USFP), the Party of Progress and Socialism (Communists) and the Democratic Left Federation (FDG). Then there are the National Rally of Independents (RNI), the People's Movement (MPE), the Constitutional Union (UC) and those who are not affiliated to any political party.

Among the less represented political parties, with fewer than 70 candidates standing for election, are the Front of Democratic Forces (FFD), the Democratic and Social Movement (MDS), the Al Ahd and Renewal alliance, the New Democratic Party and the Reform and Development Party. 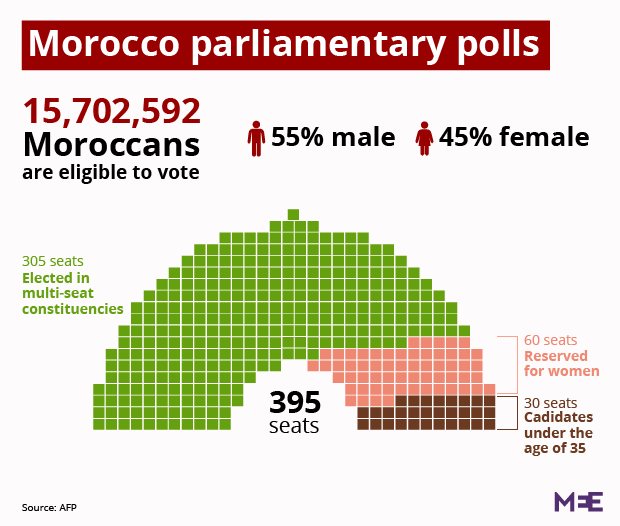 Out of the 395 seats in the Parliament, 90 will be reserved for what is called the “National List” formed by women and young people. “At the beginning this list was about integration, but now that’s very much disputed since it is being used for the relatives of the party leaders," adds Brouksy.

Two marginal parties, the liberal Moroccan party (PLM), and Al Adl wal Ihsane (an Islamist movement which translates as “Justice and Spirituality”), have decided to boycott the elections. For PLM, “the Moroccan power is not ready for a real alliance” and only offers Moroccans a choice between “a conservative reactionary force and a false modernist authoritarian force." For Al Adl wal Ihsane, the constitution is “despotism in written form and in practice doesn’t allow democratic elections.”

Will the popular left-wing Democratic Federation (FGD) shock everybody?

Maybe in Casablanca or in Rabat - but not in the whole country. The FGD has demanded a new constitution that will create the basis for a new parliamentary monarchy. “It has understood that changing the system could be possible and that the empty-chair policy has been useless so far,” emphasises Brouksy.

However as Ali Amar, the founder of news website ledesk.ma, explains, “this pleasant ‘third choice’ led by Nabila Mounibis is not widely heard and is far from having the means to get the masses more involved.

“Its ideas and inspirations are worthwhile but it's fragmented and unfinished economic programme, which is based on dismissing social democracy and inspired by anti-globalisation activism, proves that it is not yet ready yet to gain even an inch of power," he argues.

Do the manifestos make a difference to the voters?

No. The broad remit of the government (in terms of economy, defence, urban planning etc) is defined by the king. No party is questioning that.

“The elections are not really based on policies but on people,” explains Mohammed Tozy, professor in political sciences at the University of Casablanca and the Institute of Political Studies at Aix-en-Provence in France.

“What's been happening with the PJD-PAM confrontation is not linked to political management but to social projects. The PJD’s agenda is rather conservative, and the PAM’s agenda is more progressive.

“The victory of one or the other will set the trend in terms of social and religious questions, as well as values, for the next five years.”

Why is everyone predicting that the PJD is going to win?

Everyone forecasts that the PJD will win, based on the September regional elections (opinion polls are prohibited during the campaigning for the current election).

“Opposing it... well... nothing. A handful of laminated or prefabricated parties and, amid the leftovers of the left-wing, the fluttering light of the FGD," sums up Amar in his editorial.

The real suspense is in the face-to-face between Abdelilah Benkirane (PJD) and the PAM, founded in 2008 by Fouad Ali el-Himma, one of the king advisers and now led by Ilyas al-Omari. The PJD has been governing the country for the past five years, dealing with communist, centrist and liberal lawmakers. But PAM did win most of the votes during the last local elections in 2015.

“The outcome is not a foregone conclusion,” according to the economist Abdelkader Berrada, “it all depends on the abstention rate and whether electors from the big cities are going to vote or not.

'The outcome is not a foregone conclusion, it all depends on the abstention rate and whether electors from the big cities are going to vote or not'

“If people who are disappointed are actually going to vote, they will vote against the PJD. The Moroccan Workers' Union (UMT), one of the three most influential unions in the country, has called for a protest vote against the government. That has not been seen since the 60s!”

The PJD’s approach to governing has received mixed reviews. Between 2011 and 2014, fuel prices increased by 25 percent, the price of diesel by 30 percent and the price of water and electricity by between 12 percent and 15 percent. Let’s also not forget the reform of the retirement and pension plan."

Berrada adds: “All these measures have been inefficient, unfair, and have affected the purchasing power of the middle class and the civil servants." As a result the Benkirane government has become very unpopular.

No major political change is expected during the elections. As Brouksy reminds us, “the most important decisions are taken at the palace. The king remains the head of the executive power, while the government is only supervising the different departments' actions.”

The palace is hedging its bets on PAM, which Brousky says is “controlled by the king’s entourage and well-supported, which relies upon financial and social support in order to win these elections.”

Even if the PJD has already made many concessions, the monarchy - which is, by the way, somewhat annoyed at how popular the party has become - now believes that it might be easier to rule the country with the PAM. 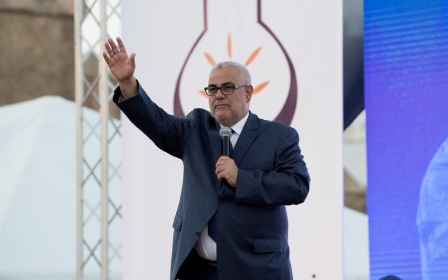 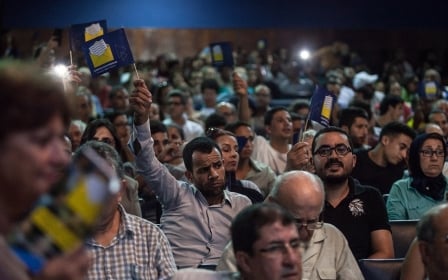